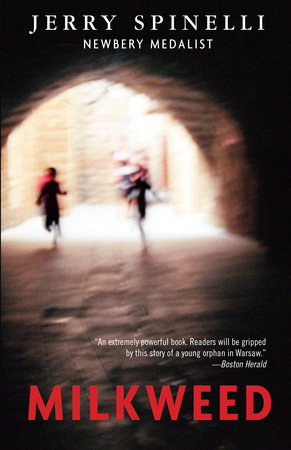 1. Identity is a key theme in Milkweed. Discuss what Misha Pilsudski means when he says, “And so, thanks to Uri, in a cellar beneath a barbershop somewhere in Warsaw, Poland, in autumn of the year nineteen thirty-nine, I was born, you might say” (p. 31). How does the made-up story of Misha’s life become so important to him? How does his identity change throughout the novel? What gives him a true identity at the end of the book? Discuss Uncle Shepsel’s efforts to renounce his identity as a Jew. How are these efforts related to survival?

2. Uri is described as “fearless on the streets” (p. 80). What does he teach Misha about fear? Janina has led a privileged life and has not had to deal with fear before her family is moved to the ghetto. Discuss how Misha helps her cope with her new life. How does fear eventually kill Mrs. Milgrom? At what point in the novel does Misha display the most fear? How does he deal with it?

4. How does Misha’s relationship with the Milgroms change throughout the novel? At what point does Mr. Milgrom invite him to become a part of the family? Why are Uncle Shepsel and Mrs. Milgrom so reluctant to accept Misha? Discuss how Misha’s desire for family comes full circle by the end of the book.

5. In this novel about the horror and destruction of the Holocaust, Jerry Spinelli includes a number of recurring images of innocence and childhood. He also creates a main character who is young and naïve. What is the effect of this blending of the horrific and the innocent? What is the importance of the carousel horses, the angels, and Janina’s shiny black shoes? Why does Misha say, “We couldn’t eat merry-go-round horses and stone angels” (p. 138)? How do Misha’s childlike feelings and ideas about the Jackboots, their “parades,” and the war change?

6. Although they are hungry and grieving, the Milgroms still celebrate Hanukkah—even after their silver menorah has been stolen. What is the importance of their faith and hope in the midst of devastation? How does Misha feel when he is included in the celebration? The first time Misha hears the word “happy” is when Mr. Milgrom uses it to describe Hanukkah and being proud of their Jewish heritage (p. 157)—why is this important? Why does Misha give up the idea that he is a Gypsy in favor of being a Jew?

7. Discuss the qualities of true friendship. Talk about the friendship that develops between Misha and Janina. Why is Misha such a good friend to the orphans? Why does Dr. Korczak, the head of the orphanage, call Misha a “foolish, good-hearted boy” (p. 64)?

8. When Misha comes to the United States, he shares on the street corner his memories of his life in Poland. He says that running is his first memory (p. 1). What might he say is his last memory? Misha doesn’t tell his family about Janina, but he pays tribute to her memory by naming his granddaughter for her. Discuss why he wants to keep the memory of Janina to himself.

10. he first sentence of Milkweed is “I am running” (p. 1). Later, Uri warns Misha to run from the ghetto to escape the deportation: “‘Get out. Run. Don’t stop running’” (p. 169). On page 180, Mr. Milgrom tells Misha to take Janina to the other side of the wall and run away: “‘Do not bring back food tonight. Do not return. Run. Run.’” Running plays an important role in Milkweed. How does it shape Misha’s life and identity? Do you think Misha is able to stop running at the end of the novel?

Between Shades of Gray
Ruta Sepetys

Salt to the Sea
Ruta Sepetys

How I Live Now
Meg Rosoff

No Promises in the Wind (DIGEST)
Irene Hunt

All the Truth That’s in Me
Julie Berry

Before We Were Free
Julia Alvarez