The Woman Who Fell from the Sky Reader’s Guide 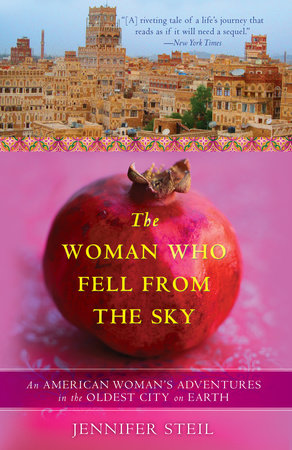 The Woman Who Fell from the Sky Reader’s Guide

print
The Woman Who Fell from the Sky Reader’s Guide

Raising compelling questions, The Woman Who Fell from the Sky provides reading groups with many ways to explore the global issues of our time. We hope that the following questions will enhance your experience of this provocative memoir.

1. The book’s title, The Woman Who Fell from the Sky, and the epigraph evoke images of women who have extraordinary powers. What did Jennifer’s experience demonstrate about women and empowerment?

2. What gives Zuhra the courage to be outspoken? What accounts for the distinction between Yemeni women who remain fearful and those who seem fearless?

3. What did Jennifer discover about how America is viewed in the Middle East? What misconceptions was she able to dispel? What aspects of American culture did she appreciate in a new way?

4. Discuss the clash in work ethics described in this memoir. What motivates Jennifer to put in so many hours at work? Do most of her colleagues have a nonchalant attitude about work hours because of their low wages, or are other factors at play?

5. As Jennifer and her reporters encounter language barriers, what cultural differences emerge? How does language reflect identity? Were you surprised that in Yemen an English-language newspaper carries prestige, though the English-speaking world is distrusted?

6. What transformations occur as Jennifer sacrifices creature comforts in exchange for intellectual ones? What personal changes have you experienced after encounters with cultures that are different from yours?

7. What does Jennifer observe about the effects of merging religion and politics? How is Yemeni society shaped by Islam?

8. What leverage does Jennifer have in negotiating with men in Yemen, such as Faris? Why is it more difficult for her to have sway over editor-in-chief Mohammed al-Asaadi?

9. Faris is continually concerned about whether the Observer is profitable. How have the media in the United States maintained profitability alongside credibility? Has the rise of online media put this separation in jeopardy, making it difficult for the public to tell the difference between news and promotional content?

10. In teaching her reporters about reducing bias and being precise in their use of language, what is Jennifer teaching them about integrity? What is her greatest civics lesson for them?

11. What could be done to quell Yemenis’ use of qat? What social programs would have to be in place to address the widespread addiction? How have Americans handled similar public health crises?

12. Discuss the recent Christmas Day attempt to blow up an airliner, allegedly perpetrated by a Nigerian terrorist with ties to Yemen. Jennifer lists several probable reasons for Yemen’s vulnerability to terrorists, including government corruption and economic disparities that breed resentment. Could the Yemeni media cure some of these ills?

13. Along with recipes for savoring locusts, the book features luscious descriptions of traditional Yemeni cuisine. How does cooking form a cultural bridge for Jennifer?

Learn More About The Woman Who Fell from the Sky
print

In the Absence of Sun
Helie Lee

Feather in the Storm
Emily Wu and Larry Engelmann

At Home in the World
Thich Nhat Hanh

The Ministry of Guidance Invites You to Not Stay
Hooman Majd