The Pope Who Quit Reader’s Guide 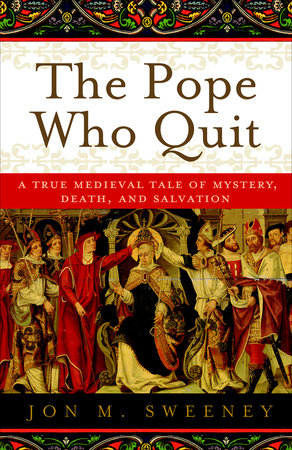 The Pope Who Quit Reader’s Guide

1. Part I — When the Unexpected Happened

A LETTER THAT CHANGED JUST ABOUT EVERYTHING

The opening paragraphs of this chapter begin to tell you something about who Peter Morrone was. Can you picture him? Have you known a strong, religious person in your life? Do you have positive or negative associations with such people?

How would you describe the typical medieval pope? Is he someone that you would want as your priest or spiritual leader? Was it a sign of his virtue, rather than his weakness, that Peter Morrone was ill-fit for the late medieval papacy? This is a theme that we will return to many times in The Pope Who Quit.

3. A MOST UNLIKELY DECISION

4. SPREADING THE NEWS
Much of the power of the medieval papacy came as a result of one of the most famous (and successful) forgeries in history known as the Donation of Constantine. See page 56. This forgery claimed that the fourth century emperor Constantine donated a great swath of imperial land to the office of the papacy, then held by Pope Sylvester I. The early humanist scholar, Lorenzo Valla, began to expose this forgery in the 1440s. A popular twelfth century legal textbook (known as Gratian’s Decretum) explained what was believed up until that time: “The Emperor Constantine yielded his crown and all his royal prerogatives in the city of Rome, and in Italy, and in western parts to the Apostolic See…. On the fourth day after his baptism Constantine conferred this privilege on the pontiff of the Roman Church, so that in the whole Roman world priests would regard him as their head, as judges do their king.” [See Lorenzo Valla, Discourse on the Forgery of the Alleged Donation of Constantine, for the text of his exposure of the forgery, in both Latin and an old English translation, at http://history.hanover.edu/texts/vallapart2.html]

5. THEY CAME TO TAKE HIM AWAY

Where was Peter when the news of the election was brought to his doorstep? See page 66. The Roman poet Petrarch says that Peter actually turned and ran, attempting to flee. Should he have?

NOW I WILL TELL YOU OF MY LIFE

Sweeney begins Part II of his book by briefly explaining the use of hagiography in telling a story such as that of Peter Morrone. Do you see any reasons to trust a hagiographical account of a life? Have you read any such accounts of religious figures in the past? What do you think of the Italian saying quoted by Sweeney on page 72 that translates as: “A lie well told is worth more than a stupid fact”?

What do you think of Peter’s family background and how it may have affected his professional course in life? How do you see him as compared to other prominent religious figures, including previous popes, of his own century? How has your own family “determined” your future – for good or ill?

8. A HERMIT LOVES HIS CAVE

Peter Damian’s writings and reputation had a profound influence on Peter Morrone’s life and thought. Sweeney describes Damian as a zealot, a pessimist, and a reformer. By this point in The Pope Who Quit, do you see Peter Morrone that way, too? Or not?

We return to the theme of asceticism. Ascetic acts were ever-present in Peter’s life. It was the nineteenth century philosopher, Friedrich Nietzsche, son of a Lutheran minister, who first called asceticism a religious person’s way of gaining power over. Nietzsche suggested that saints and martyrs attempt to dominate the rest of us with these ways of being “holy.” He saw an insidious “will to power” in fastings and other physical denials. He called it a “striving for distinction,” nothing other than a way of trying to dominate. What do you think?

This chapter sees Peter Morrone living among the men of power of his era. How do you think those men regarded the hermit? How might Peter have regarded them?

Do you see more or less “obsession” with salvation today, as compared to Peter’s era?

See pages 141-146. How did the image of Saint Francis of Assisi impact the world of the thirteenth century? Prophecies of Joachim of Fiore foretold a century before Francis were believed to have been fulfilled by him. Poets writing in the century after Francis wrote about how he was a “new Christ.” There were more followers of Francis in the first half century of his movement than had joined any other monastic movement previously. How was Francis different from other religious figures who’d come before him? Was Peter Morrone at all like Francis?

13. THE COLORFUL KINGS OF NAPLES AND SICILY

Fathers and sons. The history of the world could probably be told through the lens of sons sometimes modeling and sometimes rebelling against, their fathers. How would you describe Charles I? And how about his son?

Do you see any similarities between Pope Celestine V and any of the popes who have lived and ruled during your lifetime? Is it conceivable that a pope would make some of the same mistakes that Celestine made, today?

In Sweeney’s telling, the papal curia, Castle Nuovo, and the College of Cardinals all become like “characters” in the story, each influencing the “angelic” Pope Celestine. How did they each impact him – for good or ill?

I, PETER CELESTINE, AM GOING AWAY

One of the enduring questions from the life of Peter Morrone/Celestine V is this: Was he guileless and saintly, or was he something else? In the final chapter, Sweeney concludes by weighing in on this topic. But at this point, what do you think?

17. THE NEW ADVENT OF FRIAR PETER

There have been many stories in history of a religious figure running for his life. One thinks, for example, of the 14th Dalia Lama, Tenzin Gyatso, fleeing the Chinese communists across the Himalayan mountains from Tibet to India in 1959. A more ancient example might be Celestine’s spiritual model, Jesus Christ, who of course lost his life and never tried to flee. What do you think of Celestine’s running from Naples?

Did Cardinal Gaetani have Celestine V murdered? What do you think? What evidence is missing that would allow a legal case to be made?

19. THE WORLD IS FALLING APART

The undercurrent of this chapter is also an undercurrent that marks different religions and spiritual teachers from one another. That is, is this the only world or is there another to come? And then, are there ways to be faithful to God that have nothing to do with living in this world? How would you describe Peter Morrone’s beliefs on these topics – based on his actions?

What do you think of Sweeney’s concluding thought, that Peter Morrone/Celestine V was a quitter, yes, but that by quitting he also showed himself to be enlightened?

Jon M. Sweeney is an author, book publisher, and popular speaker with a wide range of interests. His newest book is The Pope Who Quit: A True Medieval Tale of Mystery, Death, and Salvation published February 2012 by Image Books.  Jon has appeared on PBS television, a variety of radio programs, and was the featured speaker at The National Cathedral in Washington, D.C. on St. Francis’s feast day in 2004. He frequently connects with readers via Facebook, Twitter, and in person. Jon is available to speak to your book group, conference, or church upon request.
Learn More About The Pope Who Quit
print

The Nuns of Sant’Ambrogio

Defenders of the Faith

The Borgias
Back to Top