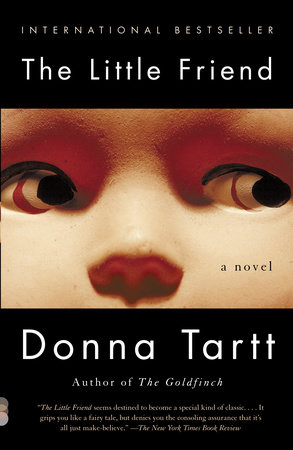 “The Little Friend seems destined to become a special kind of classic. . . . It grips you like a fairy tale, but denies you the consoling assurance that it’s all just make-believe.” —The New York Times Book Review

The introduction, discussion questions, suggested reading list, and author biography that follow are intended to enhance your group’s reading of The Little Friend, the long-anticipated and widely praised bestseller by Donna Tartt, author of the critically acclaimed The Secret History.

Harriet Cleve Dufresnes was only six months old when her nine-year-old brother, Robin, was found hanging from the black-tupelo tree in the family’s backyard. Twelve years later, the still-unexplained tragedy holds the Cleve-Dufresnes clan in an inescapable grip. Overcome by guilt and grief, Harriet’s mother, Charlotte, has drifted into numbness, indifferent
to keeping up appearances and uninterested in her daughters—Allison, a fragile, dreamy sixteen-year-old, and the sturdy, smart seventh-grader Harriet. Dixon Dufresnes, always a disengaged husband and father, has moved from the family’s home in Alexandria, Mississippi, to begin a new job and a flashy new social life in Nashville. Harriet’s grandmother, Edie Cleve, and three great aunts bring a well-intentioned, if eccentric, structure and gentility to Harriet’s life, and Ida Rhew, the family’s housekeeper, cares for Harriet and Allison with unstinting, unacknowledged devotion.

Harriet spends her time poring over family pictures for glimpses of the fabled happy times before Robin’s death, reading adventure stories and grisly accounts of real-life ill-fated adventurers and doomed civilizations, and devising daring excursions with her awed and admiring best friend, Hely. When the two decide to solve the mystery of Robin’s death, their plan—a pastiche of Harriet’s book-fed fantasies and misinterpreted family lore—leads them into the bizarre, dangerous world of Danny Ratliff, a childhood acquaintance of Robin’s and now Harriet’s prime suspect.

Donna Tartt brilliantly captures the tangle of loneliness, arrogance, inquisitiveness, and stubborn certainty that propels Harriet’s quest for justice and her determination to free her family—and herself—from haunting memories and self-inflicted wounds. In telling the story of Harriet’s coming of age, Tartt presents a heroine whose resourcefulness and intelligence expose her to the contradictions and paradoxes of the adult world and bring her face to face with the complexities of her own needs and desires.

1. The prologue offers glimpses of the household before Robin’s body is discovered. What do the descriptions of Charlotte, Edie, the great-aunts, and Ida Rhew show about the individual characters and the family dynamics? Do the reactions of Charlotte and Edie to the tragedy simply reinforce an established pattern or does a more profound change occur? How do their stories about Robin—their “exquisite delineation of his character—painstakingly ornamented over a number of years” [p. 19]—differ from their embellished and often improvised memories of life at Tribulation and other family stories?

2. Tartt writes “From the time she was old enough to talk, Harriet had been a slightly distressing presence in the Cleve household. . . . Harriet was not disobedient, exactly, or unruly, but she was haughty and somehow managed to irritate nearly every adult with whom she came in contact” [pp. 27–28]. Does Harriett live up to this description? Does she change over the course of the novel?

3. “She did not care for children’s books in which the children grew up, as what ‘growing up’ entailed (in life as in books) was a swift and inexplicable dwindling of character” [p. 157]. How do the adventure stories Harriet prefers inform her notions of what “growing up” entails? What does her choice of books reveal about her perceptions of how the world works and the things she will need to survive? Does she have a greater understanding of the adult world than most children her age?

4. The elderly Cleve sisters all have clear places in the family’s self-portrait. Edie, for example, “was both field marshal and autocrat, the person of greatest power in the family and the person most likely to act” [p. 28]. Do the other sisters fall as easily into general characterizations? Are Charlotte, Allison, and Harriet contemporary versions of the older generation? How do Tartt’s descriptions of minor characters like Mrs. Fountain [pp. 33–35] and Hely’s mother [pp. 212–14] help to bring the central female figures into sharper focus?

5. “Because her father was so quarrelsome and disruptive, and so dissatisfied with everything, it seemed right to Harriet that he did not live at home” [p. 68]. Why does Harriet see her father in such a stark, uncompromising way? What insight does this offer into Harriet’s approach to her emotions and her experiences? Are there incidents in the novel that present a different, more sympathetic view of Dix?

6. Harriet pieces together her case against Danny Ratliff from conversations with Pemberton Hull [pp. 105–108] and Ida Rhew [pp. 143–50], information she’s gleaned from local newspapers, and “random little scraps she’d picked up here and there over the years” [p. 119]. Does the evidence Harriet collects provide convincing proof of Danny’s guilt? What factors contribute to Harriet’s confidence that she has solved the mystery of Robin’s death? What makes Harriet decide to track down Robin’s killer? Does Harriet understand the emotions that trigger her need to find Robin’s killer? Why is she so sure that Danny is guilty of the crime? How valid is her reasoning and where does it fall apart?

7. How do the physical settings help to establish the social landscape of the novel? Why does Tartt call Tribulation an “extinct colossus” [p. 43], for example? What is the significance of the mounting chaos and disarray in Harriet’s own home? What does the new housing development, Oak Lawn Estates [pp. 165–66], represent?

8. The account of Harriet and Hely’s attempt to steal a poisonous snake from Eugene’s apartment and their confrontation with the Ratliff brothers [pp. 300–330] is almost unbearably frightening and intense. What devices does Tartt use to build and sustain the suspense?

9. A collection of misfits, fanatics, and criminals, the Ratliff family seems to embody Edie’s view of the white underclass: “The poor white has nothing to blame for his station but his own character. Well, of course, that won’t do. That would mean having to assume some responsibility for his own laziness and sorry behavior” [p. 146]. Do the portraits of the Ratliff brothers reinforce or belie Edie’s assumptions? What redeeming characteristics do Danny and Eugene have and how does Tartt make them apparent? Why has Tartt included Curtis in the family? How does his presence add to our understanding of the family?

10. A strong matriarch presides over both Harriet’s family and the Ratliffs. What qualities do Edie and Gum have in common? How does each exercise her power? To what extent are their approaches to life defined by their social status and personal experiences? Does Gum’s own life, for example, justify “the main lesson she had drilled into her grandsons: not to expect much from the world” [p. 357]? In what ways do the lessons Edie imposes, either explicitly or implicitly, reflect her own strengths and weaknesses? What comparisons can be drawn between Danny and Harriet’s families and, in particular, between Danny and Harriet themselves?

11. Why does Ida Rhew play such a critical role
in Harriet’s life? How does Ida’s position in the household illuminate the shortcomings not only of Charlotte, but of the other adults in Harriet’s life? How do the family’s reaction to her departure and Ida’s response to being fired [pp. 357–67] undermine Harriet’s vision of her world? In what ways do the emotions she experiences reflect both her perspective as a child and her emerging awareness and acceptance of adult uncertainties and moral ambiguities?

12. What do you make of the end of the novel? Hely thinks, “The mission was accomplished, the battle won; somehow—incredibly—she had done exactly what she said she would, and got away with the whole thing” [p. 624]. Harriet decides “She’d learned things she never knew, things she had no idea of knowing, and yet in a strange way it was the hidden message of Captain Scott, the part of the story she’s never seen until now: that victory and collapse were sometimes the same thing” [p. 544]. What do you think of these two very different assessments? How do they reflect the natures of the two characters? Does it matter that Robin’s murder remains unsolved or do you accept, as Libby says, that “the world is full of things we don’t understand” [p. 140]?

13. The Little Friend explores the relationships between blacks and whites in Alexandria from several perspectives. The blatant racism of the Ratliffs is clearly shown in such incidents as the shooting at the river [p. 142]. In which ways does Harriet’s family also exhibit a deep-seated, if more subtle, strain of racial prejudice? Is Harriet’s shocked reaction to Ida’s story about the church burning [pp. 146–47] a sign of her naiveté or does it reveal a sense of morality that distinguishes her (and by extension, her peers) from past generations?

14. The novel begins with stretches of long, languorous prose but later the pace quickens. What techniques does Tartt use to achieve this?

15. The term “Southern Gothic” is often used to describe writing set in the American South, from Tennessee Williams’ and Carson McCullers’ tales of families shaped by tragedy, insanity, and alcoholism to Anne Rice’s Vampire Chronicles. Are there elements in The Little Friend that can be described as Southern Gothic and, if so, what are they? Were you reminded of other literary styles or authors while reading the book?

16. The novel’s epigraphs come from St. Thomas Aquinas and Harry Houdini. Why is this rather odd coupling of a religious scholar and saint and a magician appropriate to the story Tartt tells? What lesson is implicit in both quotations? Has Harriet gained “the slenderest knowledge of the highest things” by the novel’s end?

Donna Tartt is a novelist, essayist, and critic. The Secret History has been translated into twenty-four languages.

Sag Harbor
Back to Top