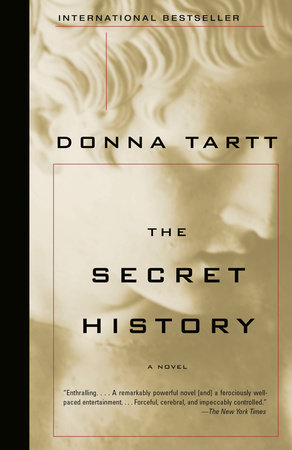 1. Richard states that he ended up at Hampden College by a “trick of fate.” What do you think of this statement? Do you believe in fate?

2. When discussing Bacchae and the Dionysiac ritual with his students Julian states, “We don’t like to admit it, but the idea of losing control is one that fascinates controlled people such as ourselves more than almost anything. All truly civilized people–the ancients no less than us–have civilized themselves through the willful repression of the old, animal self” (p. 38). What is your opinion of this theory? Are we all attracted to that which is forbidden? Do we all secretly wish we could let ourselves go and act on our animal instincts? Is it true that “beauty is terror”?

4. In the idyllic beginning it is easy to see why Richard is drawn to the group of Greek scholars. It is only after they begin to unravel that we see the sinister side of each of the characters. Do you think any one of the characters possesses true evil? Is there such a thing as true evil, or is there something redeeming in everyone’s character?

5. In the beginning of the novel, Bunny’s behavior is at times endearing and at others maddening. What was your initial opinion of Bunny? Does it change as the story develops?

6. At times Bunny, with his selfish behavior, seems devoid of a conscience, yet he is the most disturbed by the murder of the farmer. Is he more upset because he was left out of the group or because he feels what happened is wrong?

7. Henry says to Richard, “My life, for the most part, has been very stale and colorless. Dead, I mean. The world has always been an empty place to me. I was incapable of enjoying even the simplest things. I felt dead in everything I did. . . . But then it changed . . . The night I killed that man” (p. 463). How does Henry’s reaction compare to that of the others involved in the murder(s)? Do you believe he feels remorse for what he has done?

8. Discuss the significance of the scene in which Henry wipes his muddy hand across his shirt after throwing dirt onto Bunny’s coffin at the funeral (p. 395).

9. List some of the signs that foreshadowed the dark turn of events. Would you have seen all the signs that Richard initially misses? Or do you believe Richard knew all along and just refused to see the truth?

10. Would you have stuck by the group after learning their dark secret?

11. The author states that many people didn’t sympathize with Richard. Did you find him a sympathetic character?

12. What do you make of Richard’s unrequited love for Camilla? Do you feel that she loved him in return? Or did she use his love for her as a tool to manipulate him?

15. The author mentions a quote supposedly made by George Orwell regarding Julian: “Upon meeting Julian Morrow, one has the impression that he is a man of extraordinary sympathy and warmth. But what you call his ‘Asiatic Serenity’ is, I think, a mask for great coldness” (p. 480). What is your opinion of Julian?

16. Do you think that Julian feels he is somewhat responsible for the murder of Bunny? Is that why he doesn’t turn the group in when he discovers the truth from Bunny’s letter?

17. What causes Julian to flee? Is it because of disappointment in his young protegees or in himself?

18. While the inner circle of characters (Richard, Charles, Camilla, Henry, Francis, and the ill-fated Bunny) are the center of this tale, those on the periphery are equally important in their own ways (Judy Poovey, Cloke Rayburn, Marion, and so on). Discuss the roles of these characters.

19. The rights for The Secret History were initially purchased by director/producer/screenwriter Alan J. Paluka (All The President’s
Men, The Pelican Brief), and they are currently with director Scott Hicks (Shine, Snow Falling on Cedars). What are your feelings about making the novel into a movie? Who would play the main characters if you were to cast it?

20. What is the meaning of Richard’s final dream?

The Circle
Back to Top