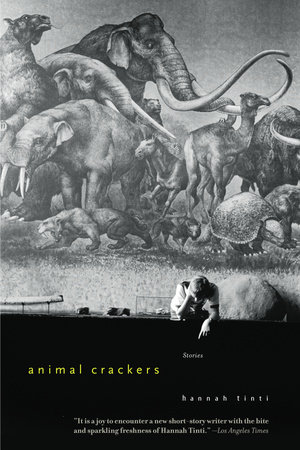 Hannah Tinti garnered numerous accolades for her fiction debut, Animal Crackers, a story collection widely acclaimed for its daring narratives and bewitching prose. In these eleven selections, Tinti explores humanity’s darkest impulses through prisms of irony and humor. Inventing a menagerie of protagonists and supporting characters, Tinti blurs the distinctions between human nature and nature itself. These are tales in which lovers hone fierce new forms of revenge, animals surpass the integrity of their caretakers, and survival can become a question of imagination as much as sheer ferocity.

The questions and discussion topics that follow are intended to enhance your reading of Hannah Tinti’s Animal Crackers. We hope they will enrich your experience of these dazzling achievements in short fiction.

1. In what way do the animals in these stories provide mirrors for human behavior? What enhancements do they provide that an all-human cast of characters could not?

3. Discuss the themes of infidelity and murder presented in “Home Sweet Home.” What instincts (including maternal ones) do the story illustrate? How do both households define normalcy?

4. What other power struggles were you reminded of when reading about the giraffes’ plight in “Reasonable Terms”? What is the effect of the story’s tragicomic elements–from the giraffes’ mock suicide to the psychiatrist’s prescription of flashy entertainment? How does Hannah Tinti balance intensity and humor throughout the collection?

5. What does “Preservation” indicate about the impulse to re-create images of life through art? What acts of self-preservation take place in the story?

6. Would you characterize nine-year-old Rick’s behavior toward Slim as sadistic, or is he simply convinced that his rabbit can fly? Do you consider much of the violence in Animal Crackers to be sadistic in nature? What is the nature of the violence in “Hit Man of the Year”?

7. Could anything (including turkey messages) have defeated the painful family legacies that impact Joey, Ralph, and Danny in “Talking Turkey”?

8. Is it possible to read Fred and Mr. Green as being part of a love triangle with the protagonist in “How to Revitalize the Snake in Your Life”? Or are her intense experiences with them separate? What makes the author’s choice of a boa constrictor especially appropriate for this story?

9. Mrs. Perkins’s affection for poultry began when she encountered a textbook diagram of Gallus, gallus, “the wild red jungle chicken of Southeast Asia.” What longings did Romeo fulfill in her? What do she and her husband teach Emeline about longings? What does Thomas Dewey help Mr. and Mrs. Perkins see?

10. How does the family dynamic in “Bloodworks” compare to those elsewhere in the collection? What is the answer to Richard’s frustrated refrain “Why did you do that?”

11. What is the effect of letting Miss Waldron have the last word in Animal Crackers? Is she the most liberated creature in the book?

12. Traditionally, animals have appeared in literature as ingredients for fable or allegory, or more recently, as animated characters that mimic humanity. What makes Hannah Tinti’s use of animals innovative in terms of their appearance, conversations, and overall characterization?

13. Each selection in the book features a character struggling against conventional wisdom or conventional behavior. Which story best summarized one of your own struggles–emotional or otherwise?

14. Discuss the literary techniques used by the author to make the story lines compelling and the characters vibrant. In what ways is her storytelling voice distinctive?

15. Should these stories be read as a continuum? Is there a recurring conflict, or a central character embodied in various forms, presented for resolution? If so, is that resolution achieved in the end?

Mendocino and Other Stories

On the Nature of Human Romantic Interaction

The Stories of Alice Adams

Living in the Weather of the World
Back to Top