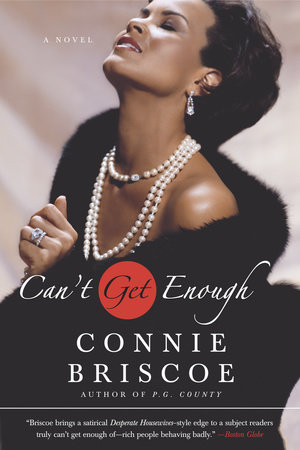 1. Author Connie Briscoe creates a distinct community with PG County and its inhabitants. How does Prince George’s County reflect the current aspirations of African Americans? How does it not?

2. Economics are often pitched against the moral and ethical values of those living in Silver Lake. How does the importance of money and material things influence Barbara, Jolene, Countess Veronique, and Pearl? Are the moral and ethical cores of these women representative of people we know in our everyday lives? How so? How not?

3. What is the beating heart of Barbara and Bradford Bentley’s marriage and Pearl Jackson and Patrick Brown’s relationship? How do these relationships stand up in comparison to each other? Looking beyond the book’s ending, can either relationship be declared a success or failure? Why?

4. What are your views of Barbara moving in with Noah? Was that a true show of strength to break away from an unhappy marriage or a ploy to get attention from Bradford? What would have happened had she stayed with Noah? Do you think they could have been happy together?

5. Even though Jolene has just about everything, how does her demand for more (money, men, recognition) prove to be her downfall? If you were a good friend of hers what advice would you have given her about her pursuit of Patrick and her hatred of Pearl? Do you think if she were open-minded, that perhaps her relationship with Brian would be different?

6. Do you find Countess Veronique’s brand of revenge on Bradford satisfying? How would you have handled her situation to save her ex-husband’s business?

7. Although women are the main characters of the book, what are the strengths and weaknesses of their male counterparts? What distinguishes Bradford from Noah, Patrick from Bradford, and Brian from the other three men? Can any of them be viewed truly and clearly as a hero, zero, or everyday man? How and why?

8. With his history as a womanizer, why do you think Bradford wanted Barbara back? Are Bradford and Barbara two sides of the same coin?

9. Do you believe Noah could have had a long-term relationship with Barbara? What compromises would they have had to make for a lasting relationship?

10. With Can’t Get Enough do you think Briscoe has tapped into modern relationships between Black men and women? What elements has she incorporated that ring true? Are there any elements that you feel could be explored further or added?

Between a Mother and her Child
Elizabeth Noble

Mine Are Spectacular!
Lynn Schnurnberger and Janice Kaplan

From the Streets to the Sheets
Noire

Through the Looking Glass
Kay Hooper

Twice Upon a Wedding
Jean Stone

All The Difference
Leah Ferguson

When in Rome…
Gemma Townley

Getting Over Mr. Right
Chrissie Manby

A Time for Mercy
John Grisham

The Evening and the Morning
Ken Follett
Back to Top