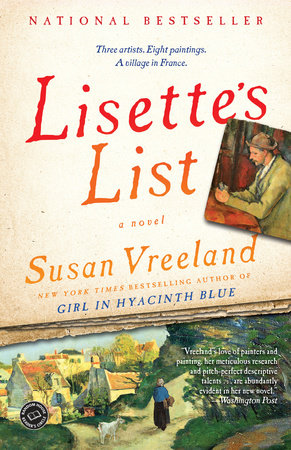 Provençal Dishes Mentioned in Lisette’s List
.
Find a variety of recipes for these delicious meals by looking online or in your favorite cookbooks.
daube: A ragout of beef, tomato, orange peel, carrots, onions, and red wine.
Chapter 8
He asked me to prepare daube for him on Saturday. His voice was pleading, almost like the whine of a child. I had to ask him what it was.
“A traditional Provençal dish, sort of a beef ragout simmered with red wine. It has orange peel and tomato and carrots and those little round onions. Pick some rosemary for it. Cézanne would have eaten it on a Saturday too.”

boeuf à l’arlésienne: A stew of cubed beef with white wine.
Chapter 9
“What’s that garlic for?” he asked.
“Daube.”
“Wrong time. It’s an early winter dish. Wait until November.”
I would use tomatoes, onions, and green olives instead of orange rind, and anchovies, and white wine instead of red, and I would call it boeuf à l’Arlésienne instead of daube.

pain fougasse: The flat bread of Provence, which has versions in Italy, Catalonia, the Balkans, and Hungary. The Provençal version often
has olives, anchovies, or dried fruit. It is often slashed to resemble an ear of wheat or a leaf.
Chapter 10
I bought pain fougasse, a flat olive loaf, which he loved, and I asked René to make some palmiers, André’s favorite pastry. We fed morsels to each other just as we had done in Paris when he called me his perfect lily.

palmier: Often called “elephant ear,” this flat, flaky, buttery pastry is drizzled with honey. Versions can be found in Spain, Germany, Italy, Portugal, and even China. I love them so, I had to have Lisette ask René, the boulangère, to make some before André went off to war, in Chapter 10.

gratin d’aubergines: Roasted eggplant with cheese and often tomatoes.
Chapter 13
Most unexpected, Madame Bonnelly, a stout woman with thick arms whom I had never met, brought a gratin d’aubergines, an eggplant-and-tomato pie garnished with bread crumbs.
“Keep up your strength, dear,” she said.

salade niçoise: A salad originating in Nice that traditionally includes green beans, potatoes, bell pepper, tomatoes, hard-boiled eggs, canned tuna (usually in a lump in the center), and anchovies marinated in oil and vinegar. It’s easy to make for a summer book club meeting.
Chapter 18
By August, I had gathered my first harvest from the ladies of my garden: Thomassine and her sisters, the tomato plants, whose small green marbles had swollen into plump red hearts; Claudine and her row of amply endowed sisters, the cauliflowers, billowing  like white thunderclouds; Celeste and her siblings, tall and stately, trying to befriend the sky by stretching their pale green stalks and leafy crowns; Lutèce and her court, standing erect like queens unfurling their ruffled green robes; Beatrice and her friends, who kept their secrets below the surface in purple balls with root tails; Caroline and her maidens, so shy they grew their orange roots downward while shaking their green frizz in the joy of clean air; Bérénice and her cousins, who hung their pendulous green tubes until they were ready for a salade niçoise.

chevreau provençal: With apologies to Geneviève, this is goat, roasted with garlic and herbs.
Chapter 19
Months later, Geneviève’s belly and teats grew large and her udder firm. One morning I came out to see two baby goats suckling hungrily. When they were large enough, after three months, I gave them to Louise and Maurice. One by one Louise roasted them, chevreau provençal style, with garlic and herbs. Toughening myself, I ate two hearty meals at their house. I was becoming reconciled to the ways of the country.

pistou à la provençale: Vegetable soup.
Chapter 19
“Ah, the French cuisine, so delicate and savory.” He ladled out a bowlful, pulled out a chair and sat at the table facing me. Waiting for it to cool, he put his feet, in muddy boots, on a chair to the side and drummed his fingers on the table. When he began spooning the soup into his mouth, I fumed at his sense of entitlement.
“Not bad, madame. What do you call it?”
“Pistou à la provençale.” I exploded my “p’s” at him as if they were bullets.
“Pistou à la provençale,” he repeated, gently mocking me.
He lit a cigarette.
“If you refuse to tell me, I will be forced to tell my captain, who has a ravaging hunger for art, and a rough way about him.”

fricassée arlésienne: A chicken ragout.
Chapter 20
Kooritzah stopped laying altogether. Knowing I could not bring myself to eat her, Louise told me that I should give her away for food. That hit me hard. Kooritzah had become a friend. Sadly, I did as Louise directed, and pictured Maurice enjoying Louise’s fricassée Arlésienne with onions, garlic, eggplant, and white wine.

sanglier chasseur: Roast boar. I doubt that you can find a boar roast in your local supermarket, but a gourmet épicerie might have boar sausage.
Chapter 23
“Be a man! Hunt me a boar!” Madame Borieman would demand. “I’m dying to prepare sanglier chasseur aux herbes de Provence, hunter-style with mushrooms, shallots, and white wine.”

minestra: Corsican soup.
Chapter 27
We hurried back downhill the distance of five houses and found him calmly spooning minestra, Louise’s thick Corsican bean and vegetable soup, into his mouth.

marzipan: Almond-flavored candies, often formed in the shape of fruits. The making of marzipan is featured in Chapters 28 and 29.
thirteen desserts: They are served on Christmas Eve, just a morsel of each, for taste. Discover them in Chapter 29.
tournedos à la Rossini: Small beef tenderloins.
Chapter 32
At Au Petit Riche, the bistro near the opera, Lisette, Maxime, and Héloïse eat “small beef tenderloins topped with slices of artichoke hearts covered with sauce béarnaise and garnished with a round of butter-fried goose liver.”

truite meunière aux amandes: Eaten at Café Le Procope, the oldest restaurant in Paris.
Chapter 34
The trout arrived browned in butter under a scattering of toasted almond slices, complemented by white asparagus and potato sticks pont neuf, arranged like a bridge over a river, and garnished with a stuffed tomato and a radish tulip, dramatically composed, an art form framed by the wide gold embossed edge of the white china.

1. Why did the novel need to begin with Lisette meeting Pascal? How was he an important presence throughout the novel and an influence on Lisette’s deepening character?

2. What were the differences in the qualities that Lisette appreciated about André and Maxime? Did these differences affect her love for both of them? How?

3. As Lisette becomes more comfortable in Roussillon, what does she find in it that she likes, or even loves? As a reader, did you want her to make this adjustment, or were you holding out for a complete and speedy return to Paris? If she had moved back to Paris right after the end of the war, what would she have lost in addition to the paintings?

4. Why is Lisette so conflicted about Bernard? What allows her even to speak to him? Since every gift he gives her has consequences, should she have rejected and destroyed each one as she does the stockings? What did you think of Bernard? Did you sympathize with him?

5. Should Bernard have been punished for his actions during the war and removed from his post? In your opinion, did his motives in siding with the Occupiers justify his stance? At one point Lisette says, “I could charge you not just as a thief but as a collaborator.” Why doesn’t she? Do you consider André’s mother, Héloïse, to be a collaborator? Why or why not?

6. In Chapter 23, Maxime speaks at length about what makes a painting great. Do you agree with his assessment? Is there any criterion that he overlooks? Select a painting you love by any painter and apply Maxime’s criteria to it. What insightful observation about life or the world or yourself does the painting offer you?

7. How do the peripheral characters—Maurice, Sister Marie Pierre, Héloïse, Louise, Odette, Madame Bonnelly, Aimé Bonhomme—complement one another in influencing Lisette?

8. The letter by Marc Chagall to the artists of Paris is historically accurate except that it mentions the cause of Bella’s death. What effect does this letter have on Lisette, not just in terms of her emotional reaction but also on her subsequent thinking and -actions?

9. In what way does Lisette’s List of Hungers and Vows differ from the popularized “bucket list” of contemporary usage? What is its purpose for her? Why wasn’t “Participate in the art world in Paris” on her list?

11. What are the biggest lessons Lisette learns throughout the course of the novel? Do they concern art or life? Does learning about art teach Lisette to live a fuller life? Or does living a fuller life teach her to better understand and appreciate art?

The Autobiography of Mrs. Tom Thumb

The Gilded Hour
Back to Top