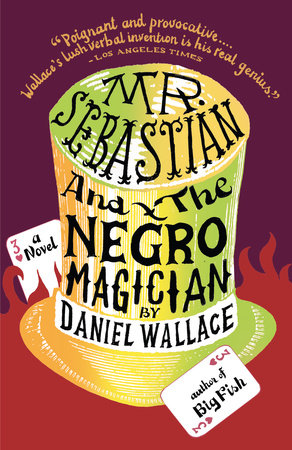 The introduction, questions, and suggestions for further reading that follow are designed to stimulate your group’s discussion of Mr. Sebastian and the Negro Magician, Daniel Wallace’s extraordinary sleight-of-hand novel about the strange life and times of Henry Walker, the Negro Magician.

A novel that is both an investigation of magic and magical itself, Mr. Sebastian and the Negro Magician asks readers to walk a tightrope between truth and illusion, reality and imagination. There is no safety net, and the occasional fall turns out to be more exhilarating than frightening.

Told by multiple narrators and moving back and forth in time, the novel centers around the elusive Henry Walker. As the novel begins, Henry is working with the Jeremiah Mosgrove’s Chinese Circus, passing himself off as a negro magician who has seen better days and fumbling his way through a magic show designed more to elicit derisive laughter than oohs and ahs. But it is 1954 in the American South, and when Henry makes fun of three belligerent white men in the audience, he is asking for trouble. The next day he disappears. From there the novel begins a very circuitous route to its dramatic conclusion. Readers learn about Henry’s life from multiple sources, none of which are entirely reliable. Rudy, the circus strongman, tells of Henry’s early life, his father’s economic misfortunes and alcoholism, Henry’s encounter with the devil (aka Mr. Sebastian) who teaches him magic in a Faustian bargain, the tragic disappearance of Henry’s beloved sister, Hannah, and Henry’s subsequent descent. The novel includes pages, some of them missing or illegible, from Jeremiah Mosgrove’s journal, the recollections of JJ the Barker and Jenny the Ossified Girl, the investigation of private detective Carson Mulvaney, hired by Henry’s sister Hannah to find Henry, and other narrative voices. Together, these voices create a kaleidoscopic portrait of a man who nevertheless remains mysterious-or distorted as in a circus mirror-throughout the novel, despite all that is said about him. His identity is never entirely unambiguous: he is black and white, a success and a failure, an outcast and a hero. Indeed, the oath he seals in blood with Mr. Sebastian constrains him not only to practice illusion, but to live within it.

Seared by the poverty of his early life, his father’s humiliation, and especially by the loss of his sister, for which he blames himself, Henry Walker is, as Jenny calls him, a tragic hero. He rises to greatness and quickly plummets back to a wretched, aimless existence. But along the way, he experiences a world that is at once freakish and normal, magical and mundane, a world where the devil is a ghost-white man who lives in room 702 at the Hotel Fremont in Muncie, Indiana, where pretending to be a black man can get you killed, and where illusion and reality are often interchangeable.

1. Mr. Sebastian and the Negro Magician employs multiple narrators—JJ, Jeremiah Mosgrove, Jenny, and Carson Mulvaney, the private detective. There are also stories within stories, as when Rudy tells Henry’s story to Corliss, Jake, and Tarp. Why has Daniel Wallace chosen to fracture his narrative in this way? What are the advantages of telling a story from multiple points of view rather than from the perspective of a single, omniscient narrator?

2. The tension between truth and fiction, reality and illusion, runs through Mr. Sebastian and the Negro Magician, and the line between them is blurred again and again. Henry told his life story to Rudy, and the narrator observes that “every word he had told Rudy was true-not factual, but true” [p. 22]. How can a story be both “not factual” and “true”? Why is this theme of truth versus illusion so important in the novel?

4. Jenny says that, “In the end, Henry was a man with two stories: one story was about revenge, and the other was about love” [p. 131]. In what ways is Henry motivated by both revenge and love?

5. Mr. Sebastian makes Henry take the magician’s oath “not only to practice illusion, but to live within it, to seem but not to be…” [p. 185]. In what ways does Henry both practice and “live within” illusion?

6. In most instances of racial “passing,” blacks would try to pass for white. In Mr. Sebastian and the Negro Magician, Henry “passes” for a black man. What does the novel reveal about race relations in America during the 1950s?

7. Is Mr. Sebastian and the Negro Magician itself a kind of magic trick or series of illusions? In what ways are readers of the novel similar to an audience at a circus magic show?

8. What is the significance of Mr. Sebastian having a face as white as a sheet and Henry assuming the appearance of a black man? Is Mr. Sebastian the devil or merely a magician or con man?

9. What is the real fate of Henry’s sister Hannah? Did Henry make her disappear? Did Mr. Sebastian abduct her? Was she given to Mr. Sebastian by her father? Is she, in fact still alive at the end of the novel, sharing a home with Mr. Sebastian? Does the novel seem to support one of these possibilities over another?

10. What is the larger emotional significance of Henry’s bringing Marianne back to life?

12. In what ways does Henry’s family history shape the course of his life? How does his family and personal history intersect with America’s economic and racial history?

14. As the novel nears its end, Henry appears very close to death. How should readers interpret the novel’s final sentences: “Think Henry Walker: Just think it. That’s all he’d have to do and it would be done, and he would know” [p. 290]? Does Henry die or live on? What will be “done” and what will Henry “know”? What is Wallace suggesting here about the relationship between imagination and reality?

15. Circuses and magic shows are above all forms of entertainment. What makes Mr. Sebastian and the Negro Magician so entertaining?

Daniel Wallace is the author of Big Fish, Ray in Reverse, and The Watermelon King. His stories have been published in many magazines and anthologies, including the Yale Review, the Massachusetts Review, Shenandoah, Glimmer Train, and New Stories from the South and The Best American Short Stories. His illustrated work has appeared in the Los Angeles Times. He teaches at the University of North Carolina and lives in Chapel Hill.

Mine All Mine
Adam Davies

That’s Not a Feeling
Dan Josefson

Down For the Count
Martin Holmén

The Kingdom of Ohio
Matthew Flaming

Getting It in the Head: Stories
Mike McCormack

Under the Eye of the Storm
John Hersey

Not on Fire, but Burning
Greg Hrbek

The First Person and Other Stories
Ali Smith

The Monk
Matthew Lewis
Back to Top