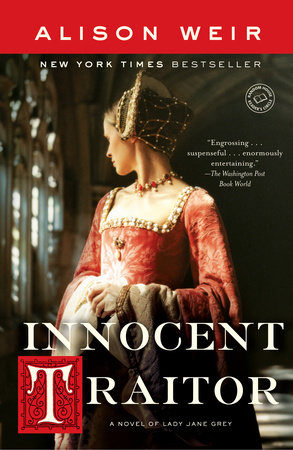 1. In what ways might this ﬁctional treatment of Lady Jane Grey’s life diverge from a historical account? Is it obvious where the author has made up passages? Are these convincing, given what is known about Lady Jane

2. What are the advantages of having several narrators? Are there any disadvantages? Which voices are the most, or least, convincing? Why is Henry VIII portrayed as a far more likable character than one might imagine?

3. The passages narrated by Admiral Thomas Seymour and Lord Guilford Dudley, which provided lighter and more humorous insights, were edited out of the book, making it an altogether darker tale. Do you think that these voices could have added anything to our overall view of Jane, or to the book itself?

4. Getting the contemporary dialogue right is always a challenge for any historical novelist. What are the potential problems and pitfalls? How far do you think the author has succeeded in writing the dialogue in this book?

5. Another challenge for the author was writing a story that has a famous ending. How does she manage to maintain tension and interest in the plot, when many of her readers will know its outcome?

6. 1To lend impact to the rape scene, earlier sex scenes were cut from the novel. Does the author succeed in shocking us with this scene? Does it convince us that suffering an experience like this might have been the reason why the historical Jane refused to sleep with her husband thereafter, or make him King Consort? How does Guilford view what happened on their wedding night?

7. 1In writing the execution scene, the author deliberated for a long time as to when Jane’s narrative should be superseded by that of the headsman. Did she make the right decision? Or would it have been more dramatic to have narrated this scene from Jane’s perspective beyond the grave?

8. Jane’s mother, Frances Brandon, is one of the most unsympathetic characters in the novel. Her treatment of the child Jane is based on Jane’s own outpourings to Roger Ascham in 1550, when she was thirteen. How convincing are these early scenes, which are all the product of the author’s imagination? What do we learn from the novel about the status of women and children in Tudor England?

9. Some readers have found Frances’s change of heart at the end unconvincing, saying it is out of character. The author based it on the fact that Frances is known to have been back at court at this time, and may–given her earlier successful intercession with Mary for her husband–have been hoping to soften the Queen’s heart and save her daughter. Is this likely? Or was Frances perhaps trying to re-establish herself at court and so distance herself from the tragedy that had overtaken her family?

10. What makes the Tudor age so perennially fascinating? Why is this period more popular than ever today?

Learn More About Innocent Traitor
print
Back to Top