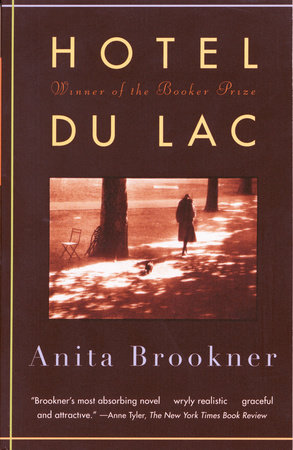 The questions, discussion topics, and author biography that follow are intended to enhance your reading of Anita Brookner’s Hotel du Lac. We hope that they will give you a number of interesting angles from which to consider this elegant, deceptively simple novel, which has become a classic in the years since its publication.

Edith Hope is an astute, watchful Englishwoman approaching middle age, a writer of romance novels who secretly believes in the happy endings they offer. After Edith embarrasses her London friends by transgressing their strict but unwritten sexual and emotional codes, they ship her off to a quiet Swiss hotel in the hope that she will become once again her familiar, respectable self. During her dreamlike sojourn at the Hotel du Lac, Edith encounters a strange cast of characters, including Monica, a cast-off wife; Mrs. Pusey, an avid, narcissistic woman with her inscrutable daughter, Jennifer; and a fascinating but rather diabolical gentleman, Mr. Neville. In this period of hiatus from her everyday world, Edith begins for the first time to reflect on her own life with real insight and honesty, and when she is offered the chance to make a radical change in her situation, she responds decisively and with a new knowledge of herself.

1. Edith describes her own personality as “rather dim and trusting” [p. 9]. Do the events of the book bear her assessment out, or does her character prove to be darker and more subversive than she herself might care to admit? Is her willingness to be commandeered by Mrs. Pusey, Monica, or Penelope an indication of passivity, or does it represent a need in its own right?

2. What the Hotel du Lac offers, Edith says, is “a mild form of sanctuary” [p. 14], but she later refers to it as an “institution” [p. 106]. Which comparison is more accurate? Have the Englishwomen at the hotel been cast off, as Edith suggests, or are they seeking refuge?

3. Is Edith an “unreliable narrator”–that is, do we have to be wary of taking her narration and interpretation of events at face value? Are there areas of her life about which she is not willing to tell the truth, even in this intimate narrative? If so, is this apparent only when we look at her letters to David? Can the letters be seen as an edited version of the “truthful” story given the reader, or is the narrative itself unreliable and evasive?

4. How much about David’s character can be gleaned from Brookner’s narrative? Why is a man of David’s type so attractive to Edith? Is his very inaccessibility part of the attraction? What sort of marriage do David and his wife share?

5. Edith’s friends accuse her of being a romantic. Do you find this assessment to be accurate? Why has Edith chosen to be a writer of romance novels, and how does this choice affect her actions? How does the “romance” theme fit into Brookner’s ending? Is Edith’s return to David at the end of the novel a romantic or an anti-romantic gesture? Do you believe that once Edith returns to London, she will continue to produce the same type of fiction?

6. Edith tells Mr. Neville that she thinks about happiness “all the time” [p. 94]. She also sketches out for him her own idea of happiness. Does Mr. Neville, in spite of his failure to win her over to his way of thinking, nonetheless influence her in making her adjust her ideas of happiness in the direction of his own? Is the ideal of “happiness” as central to her life after her encounter with him as it was before? Has her definition of it changed?

7. In her dealings with Monica and with Iris and Jennifer Pusey, Edith adopts the stance of an ironic observer who sees all the grotesque elements of the people around her. Do you believe these people to be as grotesque and ridiculous as Edith describes them, or are we perhaps seeing them through Edith’s own distorting lens? If so, why does Edith feel the need to distance people and make them less human? Does Edith intentionally attach herself to people such as Penelope–apparently her best friend but whom she also deeply scorns–who make her feel superior? How much real insight do you think Edith has into Penelope’s character? Does Edith tend to “make up” characters not only in her fiction but in her own life? What about Geoffrey Long? Are we, as readers, ever accorded a glimpse of Geoffrey as a real person who feels pain or love? Why does Edith feel compelled to mock him?

8. How has Edith’s unhappy childhood contributed toward making her who she is as an adult? It is clear that her mother has warped her feelings. In what way has Edith accepted the definitions of sex, femininity, and motherhood offered by her mother? Is her dislike of other women a legacy from her mother, or is it due to real duplicity and competitiveness in the women of her acquaintance? Is the apparently strong bond between Iris and Jennifer finally attractive to Edith, or does she find it fearsome and devouring?

9. “To Penelope, men were conquests, attributes, but they were also enemies….She considered men to be a contemptible sex” [pp. 57-58]. Penelope and Edith’s other women friends in London play a conventional sexual game with very firm though unwritten “rules.” What are those rules and in what way has Edith transgressed them? Is Edith doomed to remain an emotional outsider unless she conforms to these rules?

10. One technique that Brookner utilizes expertly is that of making the landscape and the weather mirror the central character’s feelings. How is this technique employed in Hotel du Lac? Is the landscape, including the hotel itself, a blank slate on which Edith imposes her own emotions, or does its peculiar character actually impose itself upon Edith’s own mind?

11. Edith spends much space in her letters to David describing people’s clothing. What does this emphasis say about Edith’s relationship with David? Edith believes that her “brief” for David is “to amuse, to divert, to relax” [p. 114]. What does this tell us about David and about Edith herself? Why does Edith feel unable to mail her letters to David? Why, knowing that she will not mail them, does she feel compelled to write them? How does the letter announcing her engagement to Neville differ from the earlier ones in tone and content? In her telegram to David at the end of the novel, why does Edith change the words “coming home” to “returning” [p. 184]?

12. Edith’s friends tell her that she looks like Virginia Woolf, and this resemblance has colored her own view of herself. What does Virginia Woolf represent to Edith? Why is this resemblance flattering to her? What emotional limitations does it encourage her to give in to? What is the significance of Edith’s pen name, Vanessa Wilde?

13. Though Edith seldom discusses sex even with herself, sex is at the novel’s very core. How have Edith’s sexual feelings molded her life? How do they lead to her final decision? What importance does sex have in Edith’s relationships with Neville and with Geoffrey? How does the consciousness of sex affect her dealings with the women characters in the book?

14. The first few pages of Edith’s narrative contain sidelong references to works by Yeats, Eliot, Shakespeare, and other authors. What does Brookner reveal about Edith’s character by giving her this propensity?

15. Edith readily admits to preferring men to women, but as the novel progresses, we see the beginnings of a more inclusive, sophisticated attitude, a willingness to include women in her emotional world, even to offer them her friendship. How does this manifest itself in the text?

16. What does Edith’s final decision to go back to David signify? Do you believe that it constitutes triumph, defeat, or resignation for Edith? In rejecting Neville, what interpretation of herself does she reject? What longed-for things does she give up? You might want to refer to another of Anita Brookner’s recent novels, Lewis Percy, which handles a similar situation; the novels of Barbara Pym are also of interest in examining such questions.

Anita Brookner was born in London in 1928. She received a B.A. from King’s College, University of London, and a Ph.D. in the history of art from the Courtauld Institute. Brookner taught at the University of Reading from 1959 to 1964, and since 1967 has been a Lecturer in Art History at the Courtauld. From 1967 to 1968 she was Slade Professor at Cambridge, the first woman to hold that position.

Since her first novel was published in 1981, Brookner has had a dual career as an art historian and a novelist. She has been remarkably successful in both fields and has published fourteen novels in as many years. Hotel du Lac, her fourth novel, won the Booker Prize, England’s highest honor for fiction.

The Book of Evidence
John Banville

The Children’s Book
A. S. Byatt