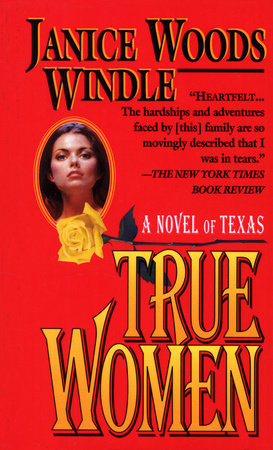 A Novel of Texas

Alive and pulsating with the events of our history, TRUE WOMEN tells the story of two dynastic family lines in Texas, the Kings and the Woodses. Euphemia Texas Ashby King could ride and shoot like any man, and she was there when Sam Houston’s rag-tag army routed Santa Anna at San Jacinto . . . . Though she risked her plantation running the Yankee cotton blockade during the Civil War, Georgia Virginia Lawshe Woods still had to defend her family from a corrupt Yankee officer . . . . Bettie Moss King survived wolves, storms, and the Ku Klux Klan to steer her family through the turbulent birth of modern times.
Inspired by the author’s own Texas roots, here is an unforgettable saga of the grit, determination, and courage of TRUE WOMEN.
""Heartfelt . . . The hardships and adventures faced by [this] family are so movingly described that I was in tears." — The New York Times Book Review

Janice Woods Windle was born and raised in Texas. Her upbringing informed her novel True Women. She has lived in El Paso since 1961 with her husband, Wayne Windle. Mrs. Windle became CEO and President of the El Paso Community Foundation… More about Janice Woods Windle