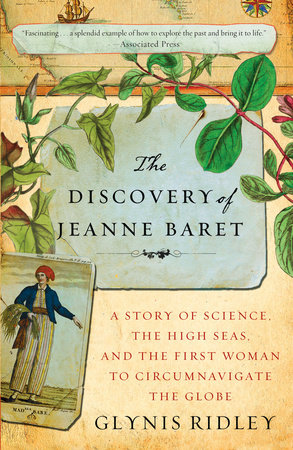 The Discovery of Jeanne Baret tells the remarkable story of the first woman to circumnavigate the globe—who did so disguised as a man. In 1766, a French peasant named Jeanne Baret disguised herself as a teenage boy in order to work as principal assistant to the naturalist Philibert Commerson, royal appointee to the first French circumnavigation. The expedition commander, Louis-Antoine de Bougainville, had no idea that the two shared more than simply a passion for botany—they were in fact lovers. In his memoirs, Bougainville reported that Baret was finally exposed by the natives of Tahiti, who recognized a woman where her countrymen had not: a version of events that went largely unchallenged for more than two hundred years. But three members of Bougainville’s crew provide a very different version of Baret’s exposure. Their unpublished accounts suggest that the truth of what happened to her is more brutal than official chroniclers cared to admit.


This guide is intended as a starting point for your conversation about The Discovery of Jeanne Baret. You can join the discussion online at www.facebook.com/authorglynisridley.

2. How many herbs, or plants of any kind, can you identify in their natural, growing state? Would you trust your ability to recognize different medicinal plant species if your life depended on it?

3. One of the epigraphs to the book is an excerpt from a poem by Susan Donnelly that reimagines the Biblical account of the naming of creation from Eve’s perspective. Why do you think Ridley chose to begin her book with this quotation?

4. If you were an eighteenth-century middle- or upper-class woman, what obstacles would hinder your pursuit of an interest in science? Why might you try to overcome those obstacles? Do you find it surprising that the first woman to complete a journey around the world was not wealthy, but rather was a peasant of limited means? Why or why not?

5. Do you find it hard to understand why Baret gave her son to the Paris Foundling Hospital? How did you feel about her choice at this point in the book? Do you think this experience affected her later choices, and if so, how?

6. If La Giraudais, captain of the Étoile, had not offered Commerson and Baret his cabin, do you think that Baret would have jumped ship at Aix? Why or why not?

7. Measure out the size of the Étoile – approximately 100 feet by 30 feet – and compare it to the size of your reading group’s regular meeting place. If you were one of 116 men living in that space, how quickly do you think you would recognize something different about Baret?

8. Vivès was first sent to sea when he was 7 and apprenticed a ship’s surgeon at age 12. How do you think this helped shape his character, social skills, and particularly his relationship with Commerson?

9. The brutal ceremonies surrounding Crossing the Line seem to have an equivalent in modern hazing practices practiced everywhere from fraternities to the military. Why do these practices continue, and are they impossible to eradicate? Do your answers help you to understand what went on when the Étoile crossed the equator? How so?

10. Supporting characters in the book include Aotourou, Bougainville, Nassau-Siegen, Véron, and Vivès. Which one of these men interests you most and why?

11. Sailing the Pacific, expedition members frequently went weeks without sight of land. The ships were therefore self-contained floating worlds. Modern research has shown that men press ganged (that is, tricked or forced) into naval service were in the minority. The majority of the ‘ratings’ (or ordinary seamen) were volunteers.

What factors do you think motivated most of the crew to sign on for a circumnavigation of the globe, entailing at least three years away from home? How much do you think Baret’s motivations resembled or differed from the men’s motivations? In your view, do any jobs exist today to fulfill the needs of people in similar situations, with similar motivations? If so, what are they?

12. Were you surprised that a group of men finally raped Baret on New Ireland or did you have a horrible feeling that this was likely? What influenced your expectations of how her life on board ship might conclude? Do you think that this possibility entered the minds of Commerson and Bougainville, and if so, should they have done more to discourage her from participating in the expedition?

13. Are there any reasons to believe that Baret’s marriage to Dubernat was anything other than a marriage of convenience? What might he have offered her that would be appealing after her experiences and past relationship?

14. When she returned to France in 1775, Baret had been away for nearly a decade. What do you imagine were the biggest readjustments Baret had to make to life back in her native country?

15. Out of all the places that Baret went ashore and visited happily (Rio de Janeiro, the shores of the Strait of Magellan, Tahiti, Mauritius, Madagascar) which one would you most like to go to and why?

Learn More About The Discovery of Jeanne Baret
print

Tip of the Iceberg

Daisy Bates in the Desert

Beyond the Hundredth Meridian
Back to Top