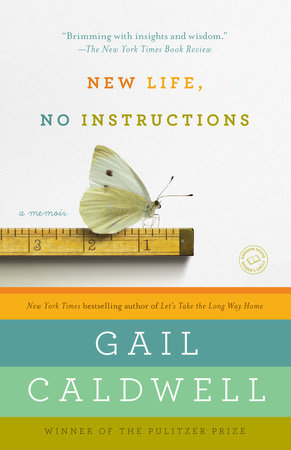 1. Your father was saying something that you couldn’t hear.

My dad was a tough, sometimes domineering Texas patriarch, and his idea of protecting his two adolescent daughters was to scare hell out of the boys in the ’hood. Granted, it was the Texas Panhandle in the 1950s: When a kid came to my or my sister’s window late at night, Wild Bill would do a patrol around the block with an unloaded rifle on his shoulder.

Why couldn’t he just tell us to watch our backs, or say how much he loved us? Now I know that he was telling us, but too often the greatest generation translated love into laconic shows of strength. I wish he could have said, “You are the most precious cargo in the world and I will do anything to keep you safe,” which might have helped me learn to say it to myself.

2. Live inside your body.

You have muscles and brain cells that are poised for amazing possibilities—childbirth and mountain climbing and dancing until 3 a.m. You can learn calculus or walk across half of Spain and your body and brain will barely flinch. Then you can sleep it off and start again. You will be able to do this for many, many years, particularly if you forgo stupid drugs and too much booze and seven helpings of cheesecake and walking in front of speeding vehicles, or, for that matter, getting into them.

3. Walk tall, even—especially—when you are afraid, or cowed, or insecure.

If you assume you are too good to be taken advantage of, the bullies of the world will usually believe you, and move on.
This skill involves daily practice, like sports or meditation, and, as my gun-toting, poker-playing dad would say, a little bluff at the right time. I had a creepy guy twice my size acting inappropriately in an airplane aisle recently—he reached his hand around my waist—and without thinking, I looked him in the eye, moved toward him with my hand up, and said, “Sir, you’re going to need to step back, now.”

I think I’ve been watching too much Matthew McConaughey in True Detective. But hey, the man got out of my way, fast.

The friend’s kid brother you were nice to when no one else was; the parking place you got into a screaming match over; the bearable, or awful, breakup you had. What matters is not the parking place, but the way you react: the kindness you display, and the mercy and the poise to be your own best self when you can. Everything matters because it morphs into this giant thing called history, or experience, and eventually life itself. Even the murderous Hound in Game of Thrones tells Arya, “A man’s got to have a code.” Find yours and live by it.

5. Remember the gulping-air surprise of being alive.

Love, color, music, the beauty of the planet—all these things will serve you later, decades later, when you are walking down a street in St. Louis, or a beach on Cape Cod, and you hear a song that sends you spinning. You hear “Night-swimming” and want to weep because it takes you back to Point Reyes in California, or a sunset over Mount Bonnell in Texas. Your memory is the motherboard. Feed it the experience and it will always give it back.

P.S. You will note that I have left out much counsel about the bad times in life. That’s because they will always be there, the worry and sorrow and little hells that we can do nothing about. No prep book for those. Do the good stuff, see above, and it will cushion the rest.

1. New Life, No Instructions resonates with the theme of life beginning anew, with the chance to start over, at no matter what age. What was a moment in your life when you were able to start fresh? What was the best part of that moment? The most difficult?

2. As Caldwell watches Tula in the backyard, she writes, “We love what we love in spite of ourselves, toward something larger and more generous than the velvet prison of self.” Has there ever been a time when you’ve grown to love something or someone through difficulty? Did the hard times make your relationship stronger? Did you feel that you’d grown, as a person, because of it?

3. “We attach ourselves to our familiar miseries, an easier act sometimes than striking out for the territory.” How did Caldwell’s attachment to her old leg, and her old self, create issues for her in the healing process? Have there ever been times when you’ve been unable to let go of something that was painful to you?

4. Throughout the book, Tula is the catalyst Caldwell needs to keep pushing forward, to keep improving her life. Think about the people or animals in your own life who give you inspiration and purpose. When did you feel most grateful to them?

5. Caldwell describes her relationship with S. and the many problems it created. In the midst of it, though, she discusses her mother and writes, “She stopped my free fall. The ledge of my mother, as I dropped through space.” Has there ever been a time when your own mother helped you get through a major turning point in your life? Did you ever feel that she knew you better than you knew yourself?

6. Caldwell tells us that she doesn’t believe much in miracles—“Too flashy, too little empirical evidence that the glow lasts. Instead I’ll take the slower route: an apple a day, a thousand leg lifts.” Think about a time in your life when you’ve worked diligently for something. Was the outcome worth more than gains that came easily?

7. One of the major themes of the book is the unconventional family that Caldwell creates with her neighbors: “I felt blessed by the tribe I was part of. . . . Here I was, supposedly solo, and the real truth was that I had a force field of connection surrounding me.” Who are some of the people who belong in your own unconventional family? Have there been times when they were able to help you when no one else could?

8. Caldwell also realizes that “solitude itself makes you stretch your heart—the usual buffers of spouse and children are missing, so you reach toward the next circle of intimacy.” Has there ever been a time when you’ve lived on your own, away from family and friends? If so, who were the first people to reach out to you? Who were the ones you connected with the most?

9. Caldwell describes her journey as a reigniting of hope: “I wanted to say something about hope and the absence of it, and how we keep going anyway.” When have you felt the most hopeless? Who helped reignite the flame of hope for you?

10. Caldwell describes her journey as a reigniting of hope: “I wanted to say something about hope and the absence of it, and how we keep going anyway.” When have you felt the most hopeless? Who helped reignite the flame of hope for you?

Naked on the Page
Jane Ganahl

The Things I Want Most
Richard Miniter

Look at You Now
Liz Pryor

There Is No F*cking Secret
Kelly Osbourne

Why Is My Mother Getting a Tattoo?
Jancee Dunn

I Love Everybody (and Other Atrocious Lies)
Laurie Notaro

Everything You Ever Wanted
Jillian Lauren

The Mistress’s Daughter
A. M. Homes

Baby, We Were Meant for Each Other
Scott Simon

I’m the One That I Want
Margaret Cho

We Thought You Would Be Prettier
Laurie Notaro
Back to Top