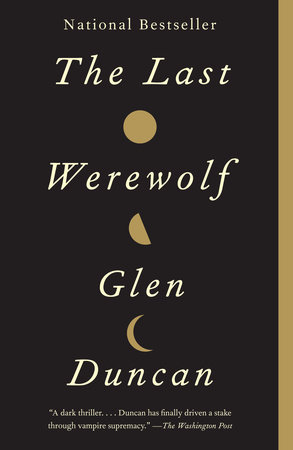 The introduction, discussion questions, and suggested further reading that follow are designed to enhance your group’s discussion of The Last Werewolf, Glenn Duncan’s brilliantly literate re-imagining of the werewolf story.

Jacob Marlowe not your typical narrator, or even your typical monster. He is an extremely well-read werewolf (he quotes everyone from Shakespeare to Susan Sontag) suffering profound existential angst and given to incisive social commentary, boundless lust, fierce violence, and bitter loneliness.
Every full moon “the Hunger” seizes him and he attacks and eats a human being. In between kills he contributes anonymously to cancer research, a sub-Saharan AIDS charity, vaccine distribution, and various other philanthropic causes, to counter-balance the havoc he wreaks.
In his 200 years he has seen it all. Nothing is news to to him because he sees the deep structures and cycles that underlie events the world thinks of as novel or unprecedented. He’s utterly exhausted by living, ready to hang up the claws and let himself be killed by Eric Grainer, head of the World Organization for the Control of Occult Phenomena (WOCOP), who has hunted him for years, seeking vengeance for the murder of his father.
And when Jake learns, from his friend and human familiar, Harley, that he is the last of a dangerous endangered species, the sad fact only intensifies his loneliness and deepens his wish to stop living. His own death sentence is, as he says, egregiously overdue.
But Jake soon discovers two groups that desperately want him to live—vampires, because werewolves may hold the key toward helping vamps tolerate daylight; and a rouge faction within WOCOP, because without monsters to fight, their own existence would be rendered superfluous. Jake wants nothing to do with any of them, and goes on the lam. It is quite by accident that he stumbles upon a much more compelling reason to live, one that reenergizes him and raises the stakes considerably.
What makes the novel so engrossing, apart from its deft and often witty appropriation of genre’s essential elements, is that this very sophisticated werewolf, by virtue of his extreme outsider status and dual existence as man and wolf—reflective human and instinctual animal—is uniquely positioned to illuminate the modern human condition.  He casts a cold eye on life and sees how much of human behavior is dictated by the empty glitz of TV and movies; how the death of God accomplished by Darwin and Nietzsche has unmoored humans from a sense of meaning and purpose in their lives; how after 80 years of living most people “peg out” not because of organ failure or cancer or stroke but because they simply can’t “carry on clambering through the assault course of mundane cause and effect” [p. 9]. And he realizes, in the end, that love can redeem all the grinding meaninglessness of civilized life.
Jake is a cynical but sharply astute observer of human behavior. He is an equally perceptive observer of his own inner life and of the predicament he has struggled with for 200 years, the tossing and turning of being both human and animal—a predicament which is, in one form or another, familiar to us all.

1. Werewolves have a long literary lineage, in folk tales and works of fiction, and they loom large in popular culture. In what ways does The Last Werewolf remain faithful to the genre and at the same time bring something new to it? In what ways is it innovative?

2. Once a month, Jake murders and eats an innocent human being (or mostly innocent—hedge fund manger is borderline). And yet he is a tremendously likable character. How does Duncan make him so appealing despite his being a monster?

3. Why is Jake so disillusioned with life as the novel begins? Why is he willing to let himself be killed? What makes him want to live again?

4. Jacqueline Delon tells Jake: “Werewolves are not a subject for academe…but you know what the professors would be saying if they were. ‘Monsters die out when the collective imagination no longer needs them. Species death like this is nothing more than a shift in the aggregate psychic agenda.” Why would human beings need to create monsters? What psychic function do monsters such as werewolves and vampires serve? Is Delon correct in concluding that “The beast is redundant. It’s been us all along”?

5. Why does Jake murder and devour his wife and their unborn child as his first kill? How does he punish himself for that crime?

6. Throughout his narrative, Jake references Shakespeare, Charlotte Bronte, Matthew Arnold, Nabakov, Susan Sontag, Ovid, and many other writers. What does his literary sophistication and general worldliness add to his character?

7. Is “the Hunger” as Jake calls it—the irresistible need to kill and eat a live human being—a metaphor? Does it have some larger meaning, or is it simply what werewolves are condemned to do?

8. What makes Glenn Duncan’s prose style so distinctive and engaging? What are some of the novel’s most arresting passages or scenes?

10. Why do Ellis, Poulsom, and the vampires all want Jake to live? Why does Grainer want him dead?

11. The Last Werewolf is a tremendously sensual novel. After making love in a Manhattan hotel, Jake and Talulla lie on the bed, “warm as a pot of sunlit honey.” What are some of the novel’s most erotically charged passages? What are some other examples of the sensuousness of Duncan’s prose?

12. Why would variations on the ironic statement, You live because you have to. There is no God and this is his only Commandment appear like a refrain throughout the novel? What is Jake’s attitude toward God and irony?

13. The Last Werewolf is a supernatural thriller, a witty and often biting cultural commentary, a confession narrative, and a love story. What does the love story, Jake’s relationship with Talulla, add to the novel? Why is it important, both in terms of the plot and in terms of Jake’s emotional development? How does being with Tululla change him?

14. In talking about Quinn’s journal and why he tried to find it, Jake tells Talulla: “It’s the same old shit. The desire to know whence we came in the hope it’ll shed light on why we’re here and where we’re going. The desire for life to mean something more than random subatomic babble.” Why might a werewolf be especially concerned with the origin and meaning of his life? Does Jake really feel it’s foolish to want answers to those questions?

15. What is the irony of America’s Next Top Model playing in background as Jake and Tululla devour music producer Drew Hillard? Where else does Jake make references to pop culture? In what ways does the novel present a critique of pop culture while at the same time participating in it?

Glenn Duncan is the author of seven previous novels. He was chosen by both Arena and The Times Literary Supplement as one of Britain’s best young novelists. He lives in London.

By Blood We Live
Glen Duncan

We Sold Our Souls
Grady Hendrix

Pride and Prejudice and Zombies: Dawn of the Dreadfuls
Steve Hockensmith

Prince Lestat and the Realms of Atlantis
Anne Rice

Angel of the Overpass
Seanan McGuire

Johannes Cabal the Detective
Jonathan L. Howard
Back to Top