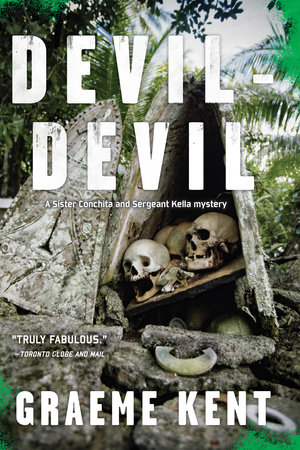 It’s not easy being Ben Kella. As a sergeant in the Solomon Islands Police Force, as well as an aofia, a hereditary spiritual peacekeeper of the Lau people, he is viewed with distrust by both the indigenous islanders and the British colonial authorities. In
the past few days he has been cursed by a magic man, stumbled across evidence of a cargo cult uprising, and failed to find an American anthropologist who had been scouring the mountains for a priceless pornographic icon. Then, at a mission station, Kella discovers an independent and rebellious young American nun, Sister Conchita, secretly trying to bury a skeleton. The unlikely pair of Kella and Conchita are forced to team up to solve a series of murders that tie into all these other strange goings-on. Set in the 60’s in one of the most beautiful and dangerous areas of the South Pacific, Devil-Devil launches an exciting new series. 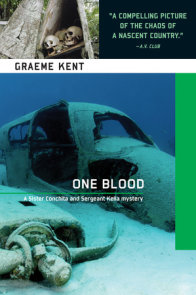 See all books by Graeme Kent

“Truly fabulous … Sister Conchita and Kella are already committed to a sequel. This is a series, and a writer, to watch.”—Toronto Globe and Mail

“Kent, a prolific author of fiction and nonfiction, fills Devil-Devil with a sparkling plot (complete with an unexpected conclusion) and a rich history of the Solomons and their native people. But it’s Kella and Conchita—and Kent’s wit—that makes this unusual mystery work, and readers will eagerly await the next installment.”—Richmond Times-Dispatch

“Kent’s first mystery is the beginning of a new and promising series…. The atmosphere and setting are integral to both character and plot and lend a unique note to this solid mystery. Definitely a series to watch.”—Booklist