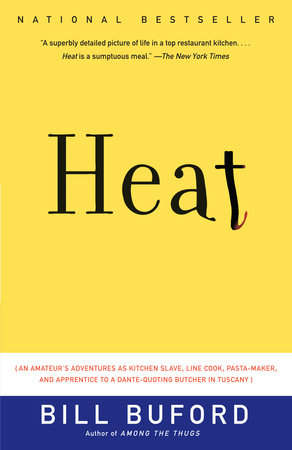 “Delightful. . . . Charming. . . . [Buford’s] style is . . . happily obsessed with a weird subculture, woozily in love with both cooking and the foul-mouthed, refined-palette world of the chef.”
—The Washington Post Book World

The introduction, discussion questions, suggestions for further reading, and author biography that follow are designed to enhance your group’s discussion of Bill Buford’s Heat, the memoir of his quest to immerse himself in the world of professional cooking. Part travelogue, part gastronomical history, part meditation on the very nature of food, Heat is an insider’s look at cuisine, infused with Buford’s manic energy and humor.

Heat started out as an article Buford wrote for The New Yorker food issue in 2002 about working in the kitchen of Mario Batali’s three-star restaurant, Babbo. The impetus for the article—Buford’s desire to learn how professional chefs are different than home cooks—quickly became a full-fledged obsession. After a year of being a “kitchen bitch,” as he puts it, Buford is able to prove himself by becoming a line cook and member of Batali’s team. However, Buford’s obsession is nowhere near sated. Instead, he follows in Batali’s footsteps all the way to Italy.

From attempting to carry a newly slaughtered pig back from the green market to his Manhattan apartment, to his quest to learn the history of pasta right down to when the egg first appeared, to his apprenticeship with a Dante-quoting butcher in the Tuscan hills, Buford imbues all of his adventures with his trademark energy and hilarity. Amid all of this, Buford offers a behind-the-scenes look at Batali’s grandeur and the history of food itself. Heat, an enthralling work, examines the very nature of how we eat and what it says about our culture.

1. Buford says, “I came to regard the prep kitchen as something like a culinary boot camp” [p. 18]. In what ways do the other chefs, Elisa in particular, appear almost militaristic in their approach to cooking? How does Buford’s description of the psychical exhaustion he endues help convey the similarities between the Babbo kitchen and boot camp?

2. Throughout Heat, Buford describes himself as a “kitchen bitch” and “kitchen slave.” What does he mean? Do you agree with his assessment of his status in the kitchen of Babbo?

3. Mario Batali tells Buford, “You learn by working in the kitchen. Not by reading a book or watching a television program or going to cooking school” [p. 10]. While Batali has done this in his own career, he is also the host of several cooking shows and author of several cookbooks. Do you agree that the best way to learn to cook is in the kitchen? What have you learned from cooking shows and cookbooks?

4. In what ways does Batali’s celebrity affect his interactions with the staff of Babbo? How is this especially noticeable in his dealings with Andy?

5. Do you think that Buford is correct in his assessment that Marco Pierre White is the first person to show Mario Batali what a chef could be? Why do you think Batali and White were unable to work together?

6. When the Babbo cookbook is about to be published, Batali tells his staff that they will have to come up with new recipes since all of the secrets of Babbo will be revealed. Would knowing a restaurant’s recipes alter your dining experience? Why or why not?

7. Dario and Batali try to waste as little as possible. Likewise, when Buford brings home the pig from the green market, he uses all of it except for the lungs. Aside from the obvious financial motivations, why are all of these men unwilling to let any food go to waste?

9. Throughout Heat, Buford argues that “food is a concentrated messenger of a culture” [p. 25]. What are some of the examples he gives to illustrate his point? Can you think of any examples of this in your own life?

10. Buford goes to Nashville as part of the Babbo kitchen team to assist in the preparation for a benefit dinner. How is this a turning point for him?

11. Before Betta teaches Buford how to make tortellini according to her recipe, she repeatedly makes him promise not to share her recipe with Batali. Why is she so emphatic about this request? Do you think that Betta is right to resent Batali’s success?

12. Dario sees himself not as a businessman or butcher but, rather, as an artisan. How does this impact the way that he runs his shop and interacts with his customers? What does Buford mean when he calls Dario “an artist, whose subject was loss” [p. 281]?

13. Has Heat changed your views on dining out and the world of professional cooking? If so, how?

Bill is also the author of Among the Thugs, a highly personal nonfiction account of crowd violence and British soccer hooliganism. For The New Yorker, he has written about sweatshops, the singer-songwriter Lucinda Williams, and chef Mario Batali.

Born in Baton Rouge, Louisiana, in 1954, Bill Buford grew up in California and was educated at the University of California at Berkeley and at King’s College, Cambridge, where he was awarded a Marshall Scholarship for his work on Shakespeare’s plays and sonnets. He lives in New York City with his wife, Jessica Green, and their two sons.

Anthony Bourdain, Kitchen Confidential; Jeffrey Steingarten, The Man Who Ate Everything; George Orwell, Down and Out in Paris and London; Julia Child, My Life in France; Ruth Reichl, Tender at the Bone
Learn More About Heat
print

The Man Who Ate Everything

Restaurant Man
Back to Top