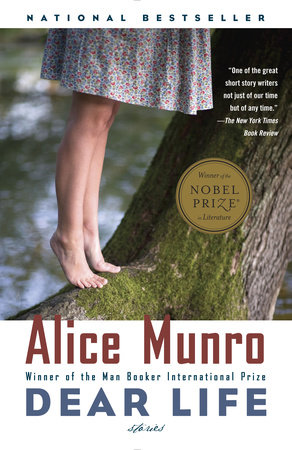 The questions that follow are intended to enhance your group’s conversation about Alice Munro’s Dear Life, a group of stories by one of our greatest masters of short fiction. In this collection, Munro includes four autobiographical stories that create a fascinating parallel for discussing the style and content of the fictional stories.

In the stories of Dear Life, Alice Munro returns to the past, and to the lives of people in small Ontario towns over the course of the twentieth century, during changes wrought by the war, by the sexual revolution, by economic ups and downs. With her extraordinary gifts for searching, compassionate observation and skillful compression of plot, she opens windows into the quiet drama of her characters’ buried desires, their errors and regrets, their lives’ most memorable crises and turning points.

In a rare and illuminating conclusion to this volume, Munro includes four stories of which she says, “I believe they are the first and last—and the closest—things I have to say about my own life.”

I. “To Reach Japan”
1. What are Greta’s feelings toward her husband and her marriage as she is leaving for Toronto? What remains unspoken between them?

2. Discuss what Katy understands and experiences on this journey (see especially the description at the bottom of page 26). What does Katy feel about Greg, and then about Harris Bennett? Why does Munro end the story as she does, with Katy pulling away from her mother? Does the story suggest that there is an inevitable cost when a woman attempts to break through the limitations of her life?

3. Discuss the paragraph beginning, “It would become hard to explain, later on in her life, just what was okay in that time and what was not” (6), in light of Greta’s actions. She is a poet: How troubling is the gap between her identities as wife and mother, and as poet and artist?

II. “Pride”
1. What do Oneida and the narrator have in common? How are they very different? The narrator is embarrassed that she has taken care of him when he was ill, and assumes that he is “like a neuter to her” (146–147). Why does he misunderstand Oneida’s willingness to care for him, and her desire to live with him (148)?

2. What does the sight of the baby skunks evoke, at the end of the story? What light does the narrator’s preface (133-34) bring to your sense of what has happened between him and Oneida?

III. “Corrie”
1. As in “Pride,” a man underestimates a woman who is attached to him: discuss what is different about the motivations and desires of the characters in the two stories.

2. How surprising is it when Corrie realizes that Howard has been keeping the money supposedly meant for Lillian’s blackmail payments? How does Corrie figure this out?  How do you interpret the final paragraph?

IV. “Train”
1. After the removal of a tumor, Belle is in a strange state of mind and tells Jackson about what happened on the day her father stepped in front of an oncoming train (196-98).  She is relieved to have spoken about this memory.  What effect does this conversation have on Jackson? What makes Jackson decide not to return to the hospital, or to Belle’s house, which he stands to possibly inherit?

2. Do the story of Jackson’s relationship with Ileane Bishop, and what we learn about his stepmother’s abuse, offer an adequate explanation for Jackson’s transient life? What are the human costs, in this story, of what Belle calls “just the mistakes of humanity” (198)?

V. “In Sight of the Lake”
1. At what point do you understand that the narrator is having a dream? What strange details indicate this? What is dreamlike about the narrator’s efforts to find the doctor’s office?

2. In what ways does the story most accurately represent the disorientation and confusion that come with aging and memory loss?

VI. “Dolly”
1. Franklin wrote a poem about his passionate affair with Dolly just before the war, and now, when he is eighty-three, Dolly turns up selling cosmetics. Is the narrator’s reaction overblown?

2. What is comical or incongruous about this story? What does it say about the intersection of aging, memory, and passion?

VII. “The Eye”
1. What aspects of the mother’s behavior are troubling to her daughter and make her welcome an alliance with Sadie? What is admirable about Sadie, especially given the time period?

2. What is strange or uncanny about the idea that Sadie, in death, might have moved her eyelid? The narrator thinks, “this sight fell into everything I knew about Sadie and somehow, as well, into whatever special experience was owing to myself” (269). How do you interpret this moment and its meaning?

VIII. “Night”
1. The narrator attributes the strangeness of her thoughts that particular summer to a special status, “all inward,” conferred on her by learning that during a routine appendectomy, the doctor had removed a tumor “the size of a turkey’s egg” (275, 272).  She says, “I was not myself” (276). What do you make of the narrator’s efforts to explain the reasons for her state of mind and the worry that she could strangle her little sister (277)?

2. How does the encounter with her father help the narrator to deal with her fear about her thoughts? Why is it significant to the impact of this encounter that in this family, emotional troubles or worries usually go unexpressed?

IX. “Voices”
1. How is the mother’s character revealed in her reaction to the presence of a prostitute at the dance, as channeled through the daughter’s observations? Why does the narrator find the voices of the soldiers so intriguing and so comforting?

2. What does the story express about the difficult relationship between mothers and daughters, especially regarding the mother’s supposed role as model and mentor in her daughter’s adolescence?

X. “Dear Life”
1. The title of this story comes from the account the mother gives the narrator of hiding her, when she was an infant, from a strange and threatening woman who used to live in the family’s house (318). This and other salient memories combine to create a picture of an often difficult family life: the mother’s physical decline, the failure of the father’s fox farm and his later work in a foundry, the failure of the narrator to return home for her mother’s funeral.  Does this story seem to embrace the idea that a significant task for the writer is to extend understanding, imagination, and empathy into one’s own past, and to make amends for errors, cruelties, and misjudgments there?  See question 4 below.

XI. Questions about Dear Life
1. What is the effect of the collection as a whole, given the order, pacing, and content of the stories?  What view of life does it project?

2. Compare the treatment of women by men in “Train,” “Amundsen,” “Haven,” and “Corrie.” Why do these women allow themselves to be lied to or taken advantage of?  What is the dynamic that permits an uneven power relationship?

3. Compare the endings of several stories.  Do they end in a state of suspension or resolution?  Think about how the endings invite questioning, reflection, and interpretation.

4. Discuss the last four stories in light of Munro’s brief introduction of them as “not quite stories,” as “autobiographical in feeling, though not . . . entirely so in fact,” and as “the first and last—and the closest—things I have to say about my own life” (255).  Should they be read as if they were fictional stories, or somehow differently?  If you were to tell four important stories from your own life, what would they be?