The Wine of Solitude Reader’s Guide 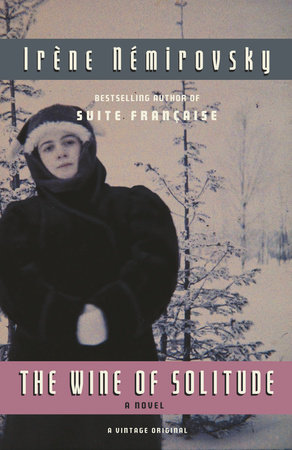 The Wine of Solitude Reader’s Guide

The questions and additional material that follow are intended to enhance your group’s discussion of this intense and poignant coming-of-age novel by Irene Némirovsky, the author of the international bestseller Suite Française.

When the story opens, Hélène Karol is a little girl living with her parents in Kiev; when it ends she is a young woman living in Paris.  Between these moments, her family has lived through the upheavals of the Great War and the Russian Revolution; they have moved to St. Petersburg, then to Finland, then to Paris.  But the most brutal battles in the novel are those that take place between mother and daughter.  Bella Karol is a vain and selfish woman who loves expensive dresses, trips abroad, and dining out with her lovers.  She has no interest in being a mother to her only child, who is cared for by her beloved French governess, Mademoiselle Rose.  Hélène’s father, Boris, is a businessman with a talent for making money.  He is devoted to his wife and daughter, and pretends not to understand that his wife often entertains her lovers at home.  Hélène soon comprehends everything, despite Mlle. Rose’s efforts to protect her innocence.  As Hélène  enters adolescence, her relationship with her mother comes to a crisis when Bella, to punish Hélène, fires Mlle. Rose.

Left alone, Hélène becomes fiercely independent and bold.  She realizes the potential in her increasing beauty and begins to live according to her own steely will.
Hélène develops an extraordinarily observant sensibility, and discovers the power and pleasure in writing that are clear signs of a future artist.  Némirovsky, as always, illuminates the truths of human behavior–in families, in love affairs, in wartime.  The Wine of Solitude contributes to the increasingly rich body of her work available in English.

1. The opening chapter introduces the family and focuses on the relationships between Hélène and her father and mother.  How would you describe the characters of Bella and Boris Karol?  What kinds of feeling pass between them and their daughter?

2. Bella is “only happy in a hotel, in a room with a bed and a trunk, in Paris.”  She thinks, “I wasn’t destined to be a placid middle-class woman, satisfied with her husband and child” (7).  Is she living in a fantasy?  What is the source of her resentment of Boris?

3. What does Hélène discover in her mother’s drawer that provokes complicated feelings (41-43)?  Hélène is ten years old.  When does she realize that her mother has a lover?  Why is she pleased at making the connection (59)?

4. Hélène’s town is described as follows: “In this peaceful town, where books and newspapers were always abandoned half-finished, where no one ever dared bring politics into the conversation … where people gave their blessing to adultery so that time transformed love affairs into a second, honorable marriage respected by everyone, including the husband—in this world, human passions were hidden behind playing cards and bitterly disputed small winnings” (45).  What do you think it was like to live in a town like this one?   Why is it difficult for Hélène to live there?

5. Hélène realizes she is profoundly isolated, and that Mlle. Rose is her only ally.  The anguish she feels about her situation torments her until she understands that she sometimes takes pleasure in her solitude (41).  Why does she find her solitude enjoyable and empowering?

6. Part of Hélène’s special gift is to intuit what is hidden or unspoken by the people around her; part of her gift is to be a passionate person herself.  In Paris she thinks of herself, “She had a richer and fuller life than other children” (63).  How do such realizations help her as she grows up?  Is her self-assessment accurate?

7. Discuss the scene in which Bella forces Hélène to show her what she has written (104-05). What has she written? What does she discover about the act of writing?

8. How does Boris react in the aftermath of Hélène’s exposure of Bella’s affair?  Can Hélène rely on her father’s love and support?

10. The family lives through World War I, the Russian Revolution, and a Finnish civil war.  Just before they leave St. Petersburg, Hélène sees a man being executed in the street and a dead woman carried away on a stretcher (122).  How do you interpret the juxtaposition of Hélène mumbling her lessons while seeing horrors out of her window (122)?

11. Hélène takes sleigh rides and plays in the snow with Fred Reuss, a charming and irresponsible married man who flirts with her.  Why do you think she refuses to say she loves himW (152)?

12. Hélène learns from her experience with Fred that she has become attractive to men, and she decides to take revenge on her mother by seducing Max (156, 163, 176).  Is it surprising, or not at all, that she would be serious about this plan?

15. After the departure of Max, Hélène’s family life becomes even more unbearable. But swimming in the sea at Biarritz, Hélène feels a fleeting moment of pure  happiness: “she was a little ashamed of herself; she was close to feeling herself foolish in being able to find such perfect pleasure in this innocent way” (232).  What do you make of the fact that she always seems to find real pleasure in nature: in the woods, in the snow, in the sea?  How does this contrast with the pleasures sought by her mother?

16. Much has been written on the topic of Némirovsky’s relationship to Judaism. She ardently defended her own Judaism, refuting those who suggested she was a “self-hating Jew;” in 1929, she was quoted as saying, “I’m accused of anti-Semitism? Come now, that’s absurd! For I’m Jewish myself and say so to anyone prepared to listen.”Later, in an attempt to survive the war, Némirovsky converted to Catholicism; shortly thereafter, she died in Auschwitz.  With this context as background, it is worth discussing the character of Boris Karol, Hélène’s father. Should Némirovsky’s portrayal of the money-obsessed Karol be considered anti-Semitic; or is it ultimately a sympathetic portrayal of a man in love with a woman who takes complete advantage of everything he has to offer?

17. Boris dies, having lost almost all of his fortune, while Bella is trying to steal some of the remaining money for her lover. Hélène decides to leave home and risk living on her own.  She says, “I’m not afraid of life. … My solitude is powerful and intoxicating” (247).  How do you respond to the ending of the novel? What is the mood that dominates?

Irène Némirovsky was born in Kiev in 1903 into a wealthy banking family.  She and her family fled to Finland during the Russian Revolution, and eventually settled in Paris.  After attending the Sorbonne she began to write and swiftly achieved success with David Golder, which was followed by more than a dozen other books.  Throughout her lifetime she published widely in French newspapers and literary journals.  She died in Auschwitz in 1942.  More than sixty years, later, Suite Française was published for the first time in 2006.

A Guided Tour Through the Museum of Communism
Slavenka Drakulic