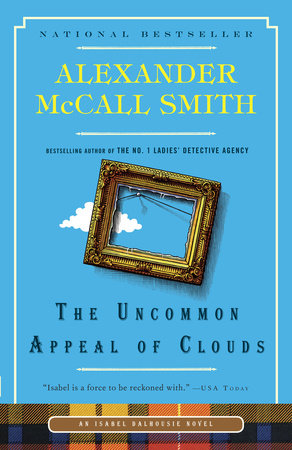 The questions, discussion topics, and suggested reading list that follow are intended to enhance your group’s conversation about The Uncommon Appeal of Clouds, the latest episode in the adventures of Isabel Dalhousie, Edinburgh’s moral philosopher and amateur sleuth.

One afternoon over coffee at her niece Cat’s delicatessen, a friend of Isabel’s asks her to consider helping Duncan Munrowe, a wealthy landowner and art collector who has had a prized painting by Nicolas Poussin stolen from his home. Munrowe had promised to give the painting to the Scottish National Gallery, and Isabel, also an art lover, decides to do what she can to restore the missing picture. Despite a frightening meeting with two men in a van who briefly show Isabel and Duncan the stolen painting in order to negotiate a ransom, Isabel suspects that the person behind the theft is closer to Duncan than he realizes.

At home, some tension arises when Isabel and Jamie learn that their prickly housekeeper, Grace, has been working on mathematics with their three-year-old son Charlie, using an ambitious program she has learned from a book. And Eddie, Cat’s assistant at the café, has fallen in love with a young woman and wants to live with her, despite the fact that her parents disapprove of him. Eddie hopes Isabel will talk to the girl’s parents on his behalf.

As she navigates these issues, Isabel finds herself challenged as a parent, a philosopher, and a friend. But, as always, she manages to use the right combination of good sense, quick wits, and kind heart to come to the right solution. The Uncommon Appeal of Clouds proves once again why Isabel Dalhousie has become one of Alexander McCall Smith’s most beloved characters.

1. Martha Drummond is a person Isabel finds “slightly irritating” (14). Is Isabel right in thinking that people like Martha simply lack social judgment and can’t pick up on certain cues? Or is Jamie more accurate in thinking that such people have idiosyncrasies in the “wiring” of their brains (19)? How does Martha test Isabel’s skills in patience and kindness?

2. Martha tells Isabel, “You’ve got money. You live in that fantastic house. You’ve got that man of yours. Everything. You’ve got everything” (29). Why does this statement make Isabel so uncomfortable? Is Martha right in thinking that Isabel’s life is enviable?

3. How does the discovery that Grace is working with Charlie on math change the perspective on Charlie as a potentially “gifted” child? Does Grace have the right, as the child’s caretaker, to engage him in such a project without first discussing it with histhe child’s parents (63)? What is unusual about Isabel’s relationship with Grace?

4. In Isabel’s work on the Review of Applied Ethics, she has to think rigorously about ethical questions. One such question, raised in a paper she is considering for publication, asks whether “we can owe duties to people we do not know,” including those of future generations. Do you agree with her thinking about the importance of not causing “future harm to people who will exist” (12)? Do you think you would enjoy Isabel’s job?

5. Seeing the empty place on the wall where the Poussin painting had hung, Isabel thinks about the possible motivations of the thief: “What better way of dealing with sheer envy than stealing the thing of which you feel so envious” (11268). Is envy ultimately behind the theft of the painting?

6. Eddie has fallen in love with a young woman callnamed Diane. Why do her parents disapprove of Eddie? What happens to Eddie’s relationship and why does he seem so comfortable with it (84–-87, 249–-50)?

7. Readers of the earlier books in the series may feel relieved that Eddie is finally confiding in Isabel about a traumatic event in his past, and his fear of being ill as a result of it. Isabel offers to go with him to a clinic so that he can be tested. What is most impressive or moving about the way Isabel extends the comfort of her friendship in this scene (91)?

8. Isabel thinks about the “naked effrontery” of the theft of the painting, and ofin all deliberate crime. “By his acts, the criminal effectively said to the victim: You don’t matter.” Do you agree with Isabel that this is “the most fundamentally wrong of all attitudes” (114)? How does this attitude come into play in small, non-criminal ways in everyday life?

9. Whoever has stolen the painting has chosen the one that Duncan loves best,— he says, “as if they wanted to hurt me,” he says (115). Isabel has noticed that Duncan seems uncomfortable with homosexuality; she has also learned that Duncan has a difficult relationship with his son, Patrick, who is gay. One of the men in the van refers to Duncan as “Pop,” as Patrick does (198). Does the construction of the plot lead you to believe that Patrick is responsible?

10. The lawyer Heather Darndt, speaking of the historical injustices that led to the unequal distribution of Scotland’s wealth, seems to imply that the theft of the painting was justifiable. What do you think of her argument (130–-31)? If Heather Darndt is right about her historical facts, why does Isabel believe she is wrong in her conclusions, and also in her professional role in the situation (132–-34)?

11. Isabel is a bit annoyed that Martha has volunteered Isabel’s help to Duncan (26), but she quickly becomes involved. The situation becomes potentially dangerous when Isabel and Duncan go to meet the men in the van (180–-85). Did Isabel put herself in danger by going along on such a mission with a near -stranger? Is it surprising that she goes along, and that Jamie allows her to go?

12. What do you make of Alex Munrowe’s suggestion that Isabel think of Patrick as a potential suspect? How does Alex come across in her meeting with Isabel in Chapter 11? Is it surprising that she suggests her brother may be the thief (1610)?

13. After Isabel’s meeting with Alex Munrowe, she tells Jamie about the missing cucumber sandwiches (167–68). How does this little episode demonstrate Isabel’s idiosyncrasy as a thinker (168-70)? What does Alex’s failure to provide the sandwiches suggest about promises and manners as forms of ethical behavior?

14. What do you think of Isabel’s strategy to resolve the problem (Chapter 16)? Who stole the painting, and why?

15. In a moment of extreme tension, as the thieves show Isabel and Duncan the stolen painting, “Isabel noticed the sky, saw the intense Poussin blue, saw the clouds; that was her abiding impression—the clouds” (183). Why is this such an interesting and painful moment in the story? Isabel reflects upon clouds on a couple of other occasions as well. What significance do you find in the novel’s title?

16. Isabel is often reminded of lines from poems, and particularly those of her favorite poet, W. H. Auden. In one of the earlier books in this series, The Comforts of a Muddy Saturday, the narrator noted that “little snatches of poetry provided their modicum of comfort, their islands of meaning that we all needed to keep the nothingness at bay; or at least Isabel felt that she needed them

Alexander McCall Smith is the author of the beloved best-selling No. 1 Ladies’ Detective Agency series, the Isabel Dalhousie series, the Portuguese Irregular Verbs series, the 44 Scotland Street series, and the Corduroy Mansions series. He is also the author of numerous children’s books. He is professor emeritus of medical law at the University of Edinburgh and has served with many national and international organizations concerned with bioethics. He was born in what is now known as Zimbabwe and taught law at the University of Botswana. He lives in Scotland. Visit his website at www.alexandermccallsmith.com.

Poems by W. H. Auden referred to in the novel:
“Musée des Beaux Arts”
“September 1, 1939”
“In Memory of Sigmund Freud”
Learn More About The Uncommon Appeal of Clouds
print

The House of Unexpected Sisters

Precious and Grace
Back to Top