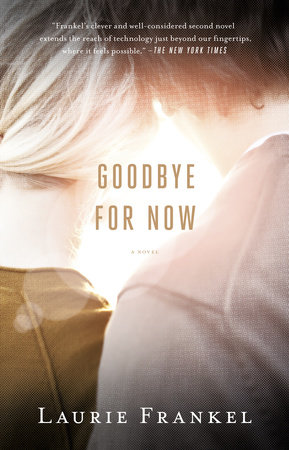 The questions, discussion topics, and reading list that follow are intended to enhance your reading group’s discussion of Goodbye for Now, Laurie Frankel’s engrossing and thought-provoking love story in an age of technology.

“Frankel’s clever and well-considered second novel extends the reach of technology just beyond our fingertips, where it feels possible.” —The New York Times

When Sam Elling creates an algorithm to pair people with their soul mates online, he meets Meredith, his own perfect match. But when Meredith’s grandmother Livvie dies unexpectedly, Sam puts his algorithm to even better use: it compiles Livvie’s old e-mails and video chats to create a computer simulation so that Meredith can say goodbye. It’s not supernatural; it’s computer science, and Meredith loves it—too much to keep to herself.

Together, she and Sam open RePose to help others who have lost a loved one. Business takes off, but for every person who just wants to say goodbye, there’s someone else who can’t let go. This twenty-first-century love story asks what would happen if saying goodbye were just the beginning, and shows how love can take on a life of its own.

2. How much of your identity is online? If RePose existed, how well do you think you could be re-created based on your online archive? How is the picture of you presented on Facebook or Twitter or other social media sites an accurate one, and how is it less accurate?

3. How much of your social time is spent socializing online? How do social networking sites make socializing easier and more fun? And how do they make it harder and less fun?

4. If RePose existed, would you use it? Who would you contact? Would you video chat or just e-mail? What would you say if you could?

5. What should happen to our online identities—our Facebook pages and old e-mails and video chats and Twitter feeds and archived texts and blogs, etc.—after we die? How can social media help the loved ones we leave behind?

6. RePose takes heat from the press and from religious groups. What do you think those groups’ reactions would be if this technology existed? Are their concerns legitimate?

7. Why does Meredith start to become disillusioned with the virtual Livvie?

8. For which of their clients does RePose seem to work best? And for whom does it work less well? What seems to make the difference?

9. Who is your favorite RePose user? Who grows and changes the most over the course of the novel?

10. Do Dash and Meredith seem like family? They are very different, but what do they have in common?

11. While there is a lot of loss, what do you think is gained here? What new love does RePose bring about?

12. Whose method of mourning do you relate to more: Sam’s or his dad’s?

13. Why does Sam tell Julia she can’t RePose? Is he right or wrong to deny her the chance to speak with her daughter again?

14. Meredith is the only projection you know both before and after death, so she’s your chance to see whether RePose really works. Does it? Is Meredith’s projection a good likeness of her? A satisfying one? When she says things she’s said before, do you feel more joy at remembering or despair at her loss?

15. Penny and Josh both argue that RePose is for the dying. Who benefits most from RePose—the dying, the living, or the dead? How does it help each of those groups?

16. Sam feels that he’s been forgiven at the very end of the novel. What sins does he think he’s committed, and do you agree? Should he be sorry? How can he make amends?

17. Why does Meredith get the last word? What hope does she offer?

Laurie Frankel is the author of one previous novel, The Atlas of Love. She lives in Seattle, Washington, with her husband, son, and border collie.

One Day by David Nicholls; PS, I Love You by Cecilia Ahern, Anybody Out There? by Marian Keyes; The Memory Thief by Emiiyl Colin; This Is How It Ends by Kathleen MacMahon
Learn More About Goodbye for Now
print

In Other Worlds
Sherrilyn Kenyon

Into the Flame
Christina Dodd