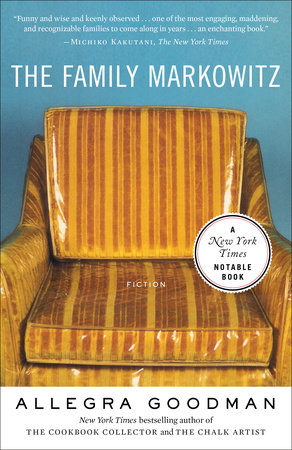 1. Rose Markowitz has what might be called a selective memory. Do you think she is simply forgetful? Manipulative? A little of both? Does she remind you of anyone in your own life?

2. Ed and Henry Markowitz are opposites in many ways. What, if anything, do they have in common?

3. How would you characterize Rose’s Jewish identity? How do her children and grandchildren differ from her—-and from each other?

4. Why is Miriam so impatient with her father’s seder? Why is her behavior so aggravating to her parents?

5. Sarah Markowitz wanted to be a great writer. What happened to her dream? Do you think she is satisfied with her life? Why or why not?

6. Sometimes the Markowitzes have dreams and visions. In “The Four Questions,” Ed has a vision of an exodus over the Verrazano Bridge to Long Island in which his in–laws and all their neighbors march over the bridge, driving their poodles before them. Where do you think this vision comes from? What does it mean?

7. Why is everyone so surprised by Henry’s marriage? Is Henry a little surprised, as well? How so?

8. The Markowitzes talk a lot, but they also leave certain things unsaid. What do they avoid saying? Do you think they have good reason? When it comes to your own parents—-or even your own children—-is it sometimes better to avoid certain subjects? Why or why not?

9. Henry and Ed need to make some decisions about their mother’s future. Do you think they are managing well? Why is it that Sarah ends up doing so much?

10. Ed studies terrorists—-but these stories are set long before the attack on the World Trade Center. What do you think Ed would be saying about terrorism now? Do you think his views might change in response to recent events?

How to Weep in Public
Jacqueline Novak

The Red and the Black
Stendhal

Under the Rainbow
Celia Laskey

Writing from the Senses
Laura Deutsch

The World on a Plate
Mina Holland

The Road to Rescue
Mietek Pemper

When She Flew
Jennie Shortridge

Favorite Folktales from Around the World
Jane Yolen