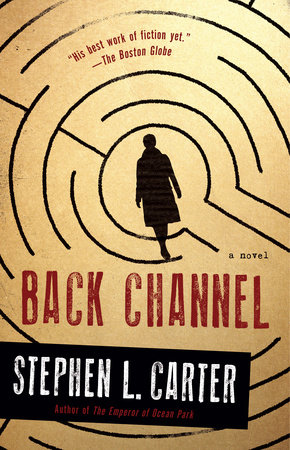 The questions, discussion topics, and reading list that follow are intended to enhance your reading group’s discussion of Back Channel, Stephen L. Carter’s ambitious and brilliantly rendered retelling of the Cuban Missile Crisis and the personalities who shaped its outcome.

From the author of The Impeachment of Abraham Lincoln comes Back Channel, Stephen L. Carter’s gripping new novel about a young woman who finds herself at the center of the Cuban Missile crisis. Seamlessly blending fact and fiction, the novel is a remarkably imaginative retelling of this era of American history, bringing to life the tense war rooms of Washington and the personalities who worked to resolve the conflict.

In 1962, tensions between the Soviet Union and the United States are at an all-time high. After the Soviet Union smuggles missiles into Cuba, nuclear war seems imminent, and the United States is pressed to determine their next move. Steps are taken to prepare for battle: ships are on the move, planes are in the air, and troops are put in position. Kennedy and Khrushchev’s advisors call for war, but one last hope for negotiation remains. Plans are put in place to create a “back channel,” a furtive path of communication between the two governments that is concealed from everyone except the most essential personnel. The conduit for communication must be someone unexpected, yet determined and clever. When a nineteen year old college student proves her grit and loyalty in an intelligence mission gone wrong, they realize that she is an ideal candidate—even if she herself doesn’t fully realize the weight of her responsibilities.

Margo Jensen is one of the few black women at Cornell University, a bright, albeit shy student who is determined to succeed despite the societal hurdles that stand in her way. She is particularly challenged by one professor, the brilliant and storied Lorenz Neiemeyer, whose class on conflict theory is legendary on Cornell’s campus. When Neiemeyer offers Margo the opportunity to travel to Eastern Europe on a fellowship, Margo jumps—but it quickly becomes clear that her trip has far more importance than she had been led to believe. When her journey takes an unexpected turn for the worst, Margo finds herself in the middle of the conflict between two nations on the brink of nuclear war. Her life is in danger, but her ingenuity and perseverance keep her one step ahead of the game. As she finds herself increasingly embroiled in the fate of the nation, Margo uncovers truths about her government—and herself—that she never dreamed she would be privy to.

1. Over the course of the novel, Margo’s understanding of her father and his wartime role becomes more vivid. How does her search for truth about her father’s role in World War II dovetail with her mission as GREENHILL? How is she inspired and motivated by her father’s memory?

2. How would you characterize Margo’s relationship with her grandmother? How does it change over the course of the novel? As Margo becomes more immersed in the mission, how does she challenge her grandmother’s authority?

3. Harrington and Agatha are both strong female characters who inhabit decidedly masculine roles in government. What prejudices do they face from their male colleagues? In what ways do they challenge the expectations of their peers? At what points—if any—do you find that assumptions about their gender hold them back from fulfilling their duties?

4. In the beginning of the novel, Margo is described to be a shy young woman, particularly in social settings with her peers. How would you characterize her friendships? Her relationship with Tom? By the end of the novel, how has her personality changed?

5. Discuss how race relations in America are portrayed throughout the novel. At what points is Margo most aware of her blackness? What was the import of the comment that Claudia Jensen could “pass” for white?

6. President Kennedy is one of America’s most storied figures. How is he portrayed in this novel? How is Kennedy characterized by his peers? How would you describe his demeanor during war room discussions? During his meetings with Margo?

8. How would you characterize the attitude of the American public during the crisis? How does Margo’s awareness of the true nature of the events isolate her from her peers?

9. Throughout the novel, various government agencies display annoyance or downright vitriol towards other ones. How does this discordance manifest throughout the novel? At what points was this strain most problematic? Was this tension surprising to you?

10. After the shootout occurs, Margo remembers Harrington’s advice to “trust nobody.”  Who is most loyal to Margo? Who does she trust the most?

11. Agatha’s character is shrouded in secrecy during most of the novel. How would you describe her? Her relationship with Margo?

12. In the beginning of the novel, Margo reveres—and arguably, fears—Professor Neimeyer. How does Margo’s perception of Neimeyer change over the course of the novel? How does their last encounter demonstrate her personal growth?

13. Margo notices how “everyone seemed to have forgotten” about Cuba. How does Margo’s experience create a gulf between herself and her peers? Do you think that her statement rings true about the public’s memory of most global crises?

14. The epilogue of the novel reveals that Margo’s story is relayed to the reader via the author, Stephen L. Carter. What do you think was the motivation for this? How does the insertion of the “author” in a fictitious work undermine the idea of narrative authority?

15. As Back Channel progresses, layers of deception are revealed, and truths become destabilized. What plot point was most surprising for you during your reading experience? Which character’s actions—if any—were unexpected?

16. The historical note provides information about the instances in which the author fabricated or altered events in order to make for a compelling work of fiction. How informed were you about the Cuban missile crisis before reading Back Channel? Now that you have read this novel, do you feel as if you have greater understanding into how government agencies communicate? How the crisis unfolded? Are you more inclined to read a book set during this time period?

Stephen L. Carter is the William Nelson Cromwell Professor of Law at Yale University, where he has taught since 1982. He is also the author of seven books of nonfiction.
Learn More About Back Channel
print

The Madmen of Benghazi

The Impeachment of Abraham Lincoln

Temple of a Thousand Faces
Back to Top