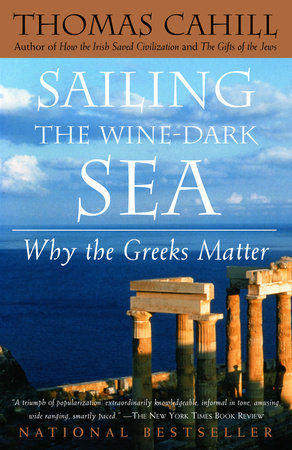 “Whatever we experience in our day, whatever we hope to learn, whatever we most desire, whatever we set out to find, we see that the Greeks have been there before us, and we meet them on their way back.” [p. 264]

Greek influence infiltrates Western art, politics, philosophy, language, storytelling, military maneuvers—virtually every defining aspect of the West’s viability. Why has the Greek imprint been so enduring, and so all-encompassing? In this fourth volume of his Hinges of History series, Thomas Cahill invites us to join him on a voyage that explores the remarkable achievements and contradictions of ancient Greek society. Piecing together shards of myth, archaeology, and history, Sailing the Wine-Dark Sea demonstrates how a passion for becoming aristoi (the best), combined with a significant amount of luck, produced a culture whose innovations and achievements make for singular legends and legacies.

A tour that spans warriors and politicians, thinkers and playwrights, and of course a pantheon of deities, this installment in the series captures crucial ingredients in the very creation of Western civilization. As Thomas Cahill points out the peaks and valleys of Greek experience, his enlightening anecdotes on everything from etymology to Athenian kitsch reveal a constant duality of sensibility and sensitivity. Perhaps this is what sets the Greek story apart: it echoes with a colorful response to the human condition, and to the quandaries that continue to permeate our daily existence.

Deciphering why the Greeks matter will enrich the lives of all who embark on the splendid journey offered in Sailing the Wine-Dark Sea.

1) In his analysis of Homer’s Iliad, Thomas Cahill cites the epic’s intense depictions of loyalty, villainy, and the honorable way to fight. Yet Homer ascribes noble behavior to both Trojans and Greeks. What parallels do you see between Homer’s perception of heroism and our own? What do you make of the mythic justification for the Trojan war—a golden apple inscribed “to the fairest,” bestowed by the Spirit of Discord? Do the mythic aspects of the Trojan War reveal any truths about why we do battle?

2) The book addresses the question of luck versus prowess in the rise of a powerful civilization [see p. 49]. Intellect and drive obviously contributed to the Greeks’ success, but do you consider them to be fortunate also? If so, in what ways were they luckier than those they defeated?

3) The tragedies written by Greek playwrights such as Sophocles, Aeschylus, and Euripides often feature tremendous violence, such as Oedipus’s blinding self-mutilation and the bloody conclusion to Antigone. One effect of this was catharsis for the audience, while demonstrating the power of the gods in determining our destinies. Do modern-day depictions of violence—in video games, films, and the media—serve a similar purpose?

4) In what ways was the Greek perception of sexual power reflected in male-dominated politics? How does Athena—the female goddess of battle—fit into this schema?

5) In your opinion, was Pericles’s version of democracy too inclusive or not inclusive enough? How did scales of economy shape Greece’s political landscape?

6) In the introduction, Thomas Cahill writes that his role as historian is not to expose breakthrough discoveries but to bring history to life. How would you characterize your role in this process? In what way do reader and writer serve to shape history? Does this process differ in ancient oral traditions?

7) What does our knowledge of homosexuality in ancient Greece indicate about this culture’s understanding of sexuality in general? What are the contemporary implications of this ancient approach?

8) Does Sappho’s “finishing school” represent a particular notion about the ideal woman?

9) In contrast to Sappho, instructors in Sparta attempted to excise all but the most brutish traits in their students. Do you consider the Spartan approach to military training to have been successful?

10) What did Plato’s writings reveal about the nature and reality of love, in its complete spectrum of manifestations? Did the death of Socrates contradict or reinforce those observations?

11) Discuss the emotional and psychological subtext conveyed by Greek art and architecture. Does it appear to glorify or subjugate humanity? What does it imply about the psyche of its creators?

12) The Greco-Roman world was in many ways a hostile locale for the seeding of Judeo-Christian values. Yet Greek became the language of the New Testament, and the geographic strongholds of the “Latin West” and “Greek East” survive to this day. In what ways did the ancient Greeks shape Christianity?

13) The book cites several Western poets, from Tennyson to Yeats to Auden, whose works often refer to classicism (a cornerstone of these poets’ schooling). Thomas Cahill, who first encountered Latin and ancient Greek in high school, provides us with a few of his own translations of Greek lyric poetry. Would it be valuable to make such a curriculum more widespread among twenty-first century American schools?

14) Was hubris at the heart of the Athenians’ fall from prominence? What lessons could they impart to today’s superpowers?

15) What common threads emerge in Greek pantheism, spanning the seasons of Demeter, the retribution of Icarus, the unbridled pleasure of Dionysus? How would you say the Greeks understood their faith?

The War with Hannibal
Back to Top