The Rule of Four Reader’s Guide 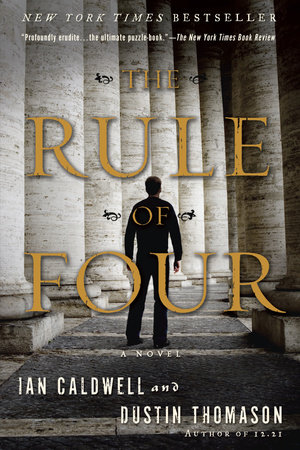 The Rule of Four Reader’s Guide

These questions, discussion topics and author biography are intended to enhance your group’s reading of The Rule Of Four by Ian Caldwell and Dustin Thomason, a contemporary thriller set in the rarified world of scholarship as much as in the world of centuries-old code-makers, and code-breakers. We hope this guide will add to your enjoyment of this suspenseful and unique debut novel.

1. One of the most unique aspects of this novel is its ability to take the reader directly into the lives of the student-heroes Tom and Paul (as well as Gil and Charlie), and then in a sentence place readers in the middle of Renaissance intrigue. Did you think tensions among the Princeton students and their mentors and rivals mirror those of the men centuries ago protecting the secrets? How were the conflicts similar, or different? Did you find that these character relationships drove the narrative as much as the decoding of the fascinating book, the Hypnerotomachia Poliphili (pronounced Hip-ner-AH-toe-mak-ee-a Poh-LI-fi-ly)?

2. The authors, Caldwell and Thomason, have been close friends since they were eight-years-old. Why is this important to the book?

3. What are Tom’s and Paul’s motivation for pursuing the secrets of the Hypnerotomachia? In what way is Tom fulfilling his own needs by alternately obsessing himself with and then ignoring the messages of the text? Did you find the father/son story moving, and in what way do the relationships we have with the people we love or admire drive our ambitions or destroy our dreams? How is Paul different from Tom?

4. In what ways are the worlds of Paul, Tom, Tom’s father, his old colleagues and foes as cut-throat and deadly as that of the anonymous writer of the Hypnerotomachia? How does the conflict of ideas become deadly? Why is the Robert Browning poem entitled “Andrea Del Sarto” that is slightly misquoted by one character, and later referenced by Paul in a critical scene, a statement about motive?

5. After the first death on campus, did you suspect who the murderer was? Were you correct?

6. What part of the code-breaking did you find most interesting? Did you “beat” Paul or Tom to a conclusion as they unraveled some of the mystery? Did you agree with the characters’ conclusions? Could you understand the mesmerizing effect that a book or work of art could have on a person? Have you ever felt this pull? In what way is it exhilarating?

7. Tom’s and Katie’s relationship suffers as the mysteries come to a head. Did this seem natural to you? Did you find the resolution of their relationship realistic?

8. At a critical moment in the novel, Paul says “I don’t want to do this alone.” What does this say about the nature of his specific quest, and intellectual puzzles in general? Why is the sharing of the result so important to him?

9. The action of the novel begins on Good Friday; three days later, on Easter, it ends (saving the postscript). Is this important? What might the authors be saying using this specific timeframe?

10. At the heart of the Hypnerotomachia may be a crusade to save works of art and literature from the ancient, mostly pagan world—a world considered infidel by some of the zealous contemporaries of the anonymous author. Why would the cause have been important? What was at stake? And if such a covert rescue operation had occurred, is it possible that it could have been kept secret for 500 years? How so? If you could uncover something in an undisturbed crypt, hidden away for centuries and untouched, what would you most want to discover?

11. In early praise for THE RULE OF FOUR admirers have compared the authors’ work to that of F.Scott Fitzgerald (The Great Gatsby, etc.), Dan Brown (The Da Vinci Code, etc.) Umberto Eco (The Name Of the Rose, etc.) and Donna Tartt (The Secret History, etc.). Are these comparisons apt? How? What other works of suspense and literature did this novel call to your mind? Could you see it as a film?

From the Hardcover edition.
Learn More About The Rule of Four
print

The League of Night and Fog
David Morrell

Lie Down with Lions
Ken Follett

The Day of the Jackal
Frederick Forsyth

The Third Secret
Steve Berry
Back to Top