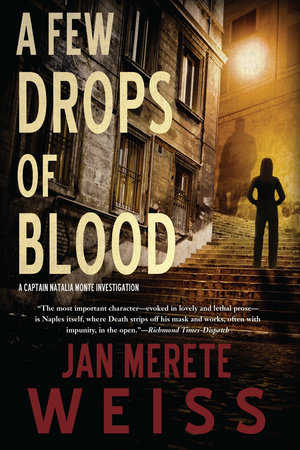 A Few Drops of Blood

About A Few Drops of Blood

Jan Merete Weiss’s Italy comes to life as Captain Natalia Monte of the Naples Carabiniere returns to investigate a murder committed at the heart of the great city’s art community.

When the bodies of two men are found, shockingly posed, in the garden of an elderly countess, Captain Natalia Monte of the Carabiniere is assigned the case. Soon she finds herself shuttling between Naples’s decadent art galleries and violent criminal underworld. If she is to succeed in solving the heinous crime, Natalia must deal with not only her own complicated past and allegiances, but also those of the city as a whole. A riveting and poetic exploration of the violence that lurks in the heart of beauty. 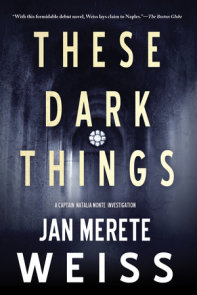 Praise for A Few Drops of Blood

“Monte is a fascinating character caught between her dedication to her job and her messy personal life. But the most important character—evoked in lovely and lethal prose—is Naples itself, where Death strips off his mask and works, often with impunity, in the open.”
—Richmond Times-Dispatch

“Weiss’s style is polished and straight-ahead . . . The strong woman at the book’s center is matched by strong women from other, related fields in ways that have implications for future editions in the series.”
—International Noir Fiction

“Memorable characters boost this atmospheric mystery redolent of the city’s art, architecture, and the détente that permits the Carabinieri and the Camorra to both operate in a state of tense and fragile peace.”
—Publishers Weekly, Starred Review

“Fans of Weiss’s series debut These Dark Things who have been awaiting a sequel will find their patience well rewarded by this strong follow-up.”
—Library Journal

“A beautifully written novel, including glimpses into the history of the area during and after the war and a solid murder mystery at its core, it is recommended.”
—Midwest Book Review

“The setting is superb . . . This series is turning into something very special, and I look forward to the next installment.”
—Kittling Books

“[A] fresh set of villains are boldly painted, and the pace is uptempo . . . Ms. Weiss has established a unique and enduring character with Natalia Monte.”
—The Crime Book Beat

Praise for Jan Merete Weiss
“Where better to set a noir police procedural than in streets awash in uncollected trash, against a backdrop of smoke rising from Vesuvius? . . . Donna Leon owns Venice, and David Hewson rules Rome. With this formidable debut novel, Weiss lays claim to Naples.”
—Boston Globe

Weiss invests her debut with a plot replete with shocks, her characters—even the minor ones—are drawn with care and come alive as complete beings on the page, and her vivid portrayal of Naples, in its glory and its gloom, is unforgettable . . . These Dark Things tells a dark story and marks the beginning of what promises to be a bright series.”
—Richmond Times-Dispatch

“[F]ull of intriguing contradictions and cultural clashes between modern Naples and its past, and Merete Weiss confidently weaves them into this distinctive mystery.”
—Milwaukee Journal-Sentinel

A Few Drops of Blood