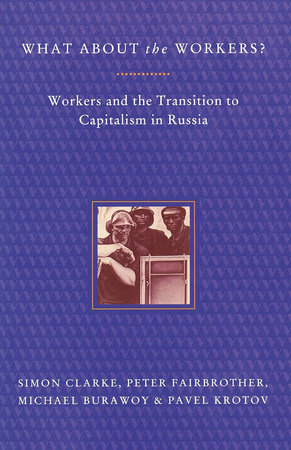 What About the Workers?

Workers and the Transition to Capitalism in Russia

About What About the Workers?

Most writing on the dramatic events in the former Soviet Union has been based on the assumption that Russia is engaged in a transition from “state socialism” to capitalism, and focuses on political and ideological debates formulated in these terms.

This book questions whether Russia is in transition to capitalism and looks behind the political and ideological debates to focus on the development of the social relations of production, and on the class struggles to which these give rise. Simon Clarke introduces the book with an examination of the crisis of state socialism, in order to identify the dynamic of change in contemporary Russia. Michael Burawoy and Pavel Krotov develop a detailed case study of one Russian enterprise, which is followed by an analysis of the role of the trade unions in the Soviet system by Simon Clarke and Peter Fairbrother, on the basis of which they develop an analytical account of the development of the workers’ movement in Russia since 1987. Simon Clarke concludes the book with a detailed examination of struggles around privatization.

The common conclusion is that beneath the political turmoil the dominant class has renewed and restructured itself, but has not managed to overcome the challenge presented by the working class. The fragmentation and atomization of the working class remains a problem, but the struggle over the transformation of class relations is only just beginning.

Looking for More Great Reads?
21 Books You’ve Been Meaning to Read
Download Hi Res
What About the Workers?

What About the Workers?