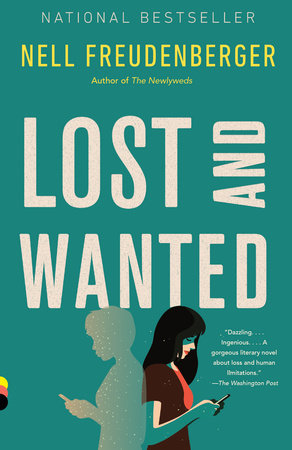 The questions, discussion topics, and other material that follow are intended to enhance your group’s conversation of Nell Freudenberger’s Lost and Wanted, a poignant novel that follows a trio of college friends through the complexities of their adult relationships, when the loss of one tests the boundaries of love, logic, and science.

1. What was your impression of Helen at the beginning of the novel as compared to the end? Even with her rare intellectual abilities, and her scientific ways of thinking, does she discover new things to learn, and new parts of herself, in response to Charlie’s death?

2. What do you think brought Charlie and Helen together as friends in the first place? How did they learn to speak the same language, despite their different interests and backgrounds? And does this change, when Charlie passes away?

3. Describe the process by which Helen chose Jack’s father. Were you surprised by her preferences in the sperm donor, and what she values in Jack based on his father’s traits (including how different some of them are from her own)?

4. When Helen and Neel create the Clapp-Jonnal model at Harvard, she describes feeling “the way people describe falling in love but it was so much better than the reality of that. The model gave me a kind of happiness that didn’t depend upon anyone else; it could be carried with you. I thought that this was what religious faith must be like, the peace in knowing that there was something beyond the world you knew, and that your own inner experience would indeed endure” (42). How does this reflect Helen’s own understanding of the limits of human knowledge?

5. Each of the three main characters—Helen, Charlie, and Neel—have their own feelings of not fitting in somehow. How does being different from others people bring these people toward one another? Consider also what Helen says about how, unlike herself, her friends weren’t “finding that their own ideas shifted under the influence of powerful fields created by two equally magnetic friends” (63–64). What does this suggest about Helen’s confidence in her own powers of attraction and influence on others?

6. Charlie comes from an affluent black family, with highly-educated parents, in Boston; Helen grew up in a middle-class white family in Los Angeles. Each of them ends up settling in the opposite city, on opposite coasts. How have both women sought to move away from their upbringings in adulthood? How do their family backgrounds—and the colors of their skin—continue to influence their lives they live?

7. What was your initial reaction to the messages Helen receives from Charlie’s phone? If you were Helen, how would you react? Do you think that her response to Simmi’s confession reflects relief or disappointment? And what was your own response to the story’s answer to that mystery?

8. Compare the children’s understanding of death and higher powers with that of the adults in the novel. Which kind of faith proves more accurate, and how might you see the children’s perspective influencing the adults’, and vice versa?

9. Charlie characterizes lupus as a disease that “basically rewires your neural pathways, so that your brain is getting messages that your body hurts when it really shouldn’t” (169). How is this reflected in what happens leading up to and after her death?

10. Many in Charlie’s circle were alarmed and upset by Charlie’s decision to end her own life, especially her parents. Discuss the echoes of this decision on her family and her circle overall. Do you think she did the right thing?

11. There are many different kinds of love in the novel. Where are the lines drawn among certain kinds of love—romantic, platonic, unconditional—and when, if ever, does love become dangerous? Helen and Neel vacillate between romantic attraction and another kind of force. Discuss what happens to each of them at the end of the novel and whether it seems satisfying to them both to remain friends with a history. What do you think is surprising, if anything, about the fact that both Neel and Terrence are attractive to Helen?

12. Charlie’s experience with Pope radically changes the course of her time at Harvard, her career, and her friendship with Helen. How would someone in her situation react in today’s environment, perhaps especially on a highly-charged college campus? What did you think about the way Helen, years later, gets involved?

13. Neel comes back to Boston as part of the LIGO team, which is well on its way to making a huge discovery. How does the LIGO research on gravitational waves impact Neel and Helen’s careers—and also their relationship? Consider Helen’s comment that she is “betting on the idea that LIGO would record not only the gravitational waves from colliding black holes, but from pairs of neutron stars, exploding in what is called a kilonova” (115). Do you think that Helen and Neel’s professional rivalry is healthy or even productive?

14. At the end of the novel, after Terrence and Simmi leave the Boston area and the LIGO scientists win the Nobel Prize, Helen reflects that “to understand more of our cosmology, we’re going to have to admit that there may be laws so different from the ones we know, so seemingly counterintuitive, that it will take all our imagination to uncover them” (315). Is there anything that Helen does know more definitively, after all she experienced? Have her own expectations of her life’s work, as a scientist, mother, and friend, changed?

The Particular Sadness of Lemon Cake

The Best Exotic Marigold Hotel
Back to Top