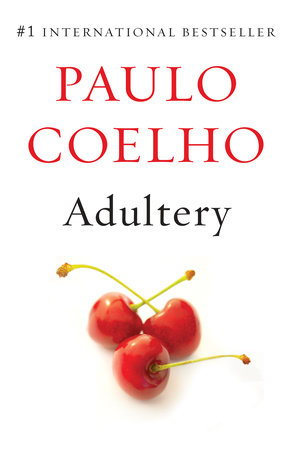 The questions, discussion topics, and reading list that follow are intended to enhance your reading group’s discussion of Adultery¸ international best-selling author Paulo Coelho’s gripping, intensely psychological portrait of a marriage on the brink of collapse, and the complex emotions that surface when trust is breached in a relationship.

Provocative and compelling, Adultery is international best-selling author Paulo Coelho’s deeply introspective novel about how one woman confronts her midlife malaise—and the consequences that her decisions have on her personal life and self-esteem. With keen insight into the psychological motivations that drive behavior, Adultery takes readers on a journey through the spectrum of human emotion.

From the outside, Linda, the protagonist of Adultery, appears to have it all: a career as a respected journalist, a doting husband, loving children, and a beautiful home in Geneva. But despite these comforts, she feels crushingly alone—and bored with the routine of her stable life. As her dissatisfaction spirals into depression, thoughts of radical changes begin to excite her more and more. When a friend from the past comes back into her life, she becomes overwhelmed with impulses and urges that have lain dormant for years. Seized by desires of passionate affair, she goes down a path that she never dreamed she would take, destabilizing the comfortable life she has created for herself and her family—and ultimately, forcing herself to confront her demons. With stunningly rendered prose and nuanced character portraits, Adultery is an accomplished novel that explores the moral and psychological questions that make people tick.

1. In the beginning of the novel, Linda describes herself as risk-averse. How does the concept of risk taking factor into the protagonist’s actions throughout the novel? By the end of the novel, do you think that she associates risk with reward?

2. How is love defined throughout Adultery? Linda contemplates requited versus unrequited love. Which type of love do you believe is more transformative in the novel?

3. Throughout the novel, the protagonist attempts to articulate what her unhappiness feels like: “an animal who can’t quite understand how it got caught in the trap,” a “spongy black hole.” How did these analogies help to shape your understanding of her mental state? Did you feel sympathy for the character throughout your reading experience?

4. Linda claims she feels “comfortable in my madness.” Are there points where you feel that she is losing touch with reality or giving in to delusional thinking?

5. Why is Jacob so attractive to Linda? Is it the illicitness of their affair that excites her, or does she have a genuine appreciation for his personality? What aspects of his personality ­­are most appealing to her?

6. The protagonist emphasizes the importance of “keeping up appearances.” How does that need to exhibit a normal, happy life arise throughout Adultery? Where in the novel do the boundaries between public and private personas become blurred?

7. Discuss the significance of the novel Frankenstein throughout Adultery. How is the scientist/monster dichotomy reflected in the Linda’s own personality and actions?

8. The protagonist laments that all she feels is “insomnia, emptiness, and apathy, and, if you just ask yourselves, you’re feeling the same thing.” Why do you think the author chose to direct that sentiment toward the reader? Are there other places in the novel wherein the protagonist assumes the reader feels the same way she does?

9. Examine the scene in which Marianne and Jacob dine with Linda and her husband. Based on what was said, do you think that Marianne had any suspicion about her husband’s affair? Or did Linda’s anxiety about the situation color her perception of Marianne’s words?

10. Discussions regarding drug usage in Switzerland occur several times in the book. Before going to meet the drug dealer, Linda notes that the Swiss “both prohibit and tolerate” drugs at the same time. What does this contradiction say about Swiss culture?

11. Adultery is set in Switzerland, and mentions of Swiss culture pepper the narrative. Discuss what you learned about Geneva and Swiss culture. Did anything surprise you? Are there any connections to be made between the discussion of cultural norms in Swiss culture and the protagonist’s actions?

12. As her affair progresses, Linda’s actions and thoughts take a darker, more obsessive tone. Did your perception of her change throughout the novel? How did you react to her decision to “destroy” Marianne?

13. Adultery is a novel that explores the line between morality and immorality. How does Linda define morality? How does her husband? What actions—if any—would you deem immoral?

14. It could be argued that Adultery is about examining selfhood. How does Linda’s understanding of herself and her desires change by the end of the novel? What does her affair teach her about herself? About her relationship with her husband? Do you think she regrets her affair?

15. Discuss the scene in which the protagonist and her husband go paragliding. How does that experience transform her? Why do you think she cries after she lands?

One of the most influential writers of our time, Paulo Coelho is the author of many international best sellers, including The Alchemist, Aleph, Eleven Minutes, and Manuscript Found in Accra. Translated into 80 languages, his books have sold more than 165 million copies in more than 170 countries. He is a member of the Brazilian Academy of Letters and has received the Chevalier de l’Ordre National de la Légion d’Honneur. In 2007 he was named a United Nations Messenger of Peace.
Learn More About Adultery
print

The Brightest Star in the Sky
Marian Keyes

The Man of My Dreams
Curtis Sittenfeld

The First Husband
Laura Dave
Back to Top