The Gods of Tango Reader’s Guide 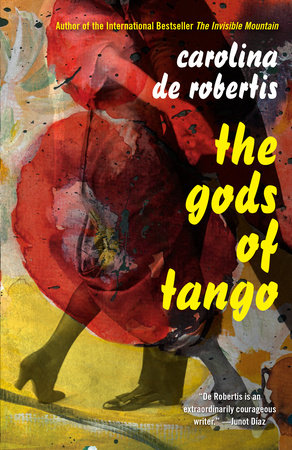 The Gods of Tango Reader’s Guide

The questions, discussion topics, and reading list that follow are intended to enhance your reading group’s discussion of The Gods of Tango, the mesmerizing new novel from award-winning author Carolina De Robertis.

Arriving in Buenos Aires in 1913, with only a suitcase and her father’s cherished violin to her name, seventeen-year-old Leda is shocked to find that the husband she has travelled across an ocean to reach is dead. Unable to return home, alone, and on the brink of destitution, she finds herself seduced by the tango, the dance that underscores every aspect of life in her new city. Knowing that she can never play in public as a woman, Leda disguises herself as a young man to join a troupe of musicians. In the illicit, scandalous world of brothels and cabarets, the line between Leda and her disguise begins to blur, and forbidden longings that she has long kept suppressed are realized for the first time. Powerfully sensual, The Gods of Tango is an erotically charged story of music, passion, and the quest for an authentic life against the odds.

1.The author presents three quotes in the epigraph to this novel. What does each mean, and how do they play off one another?

2. The initial scene shows Dante dying, before jumping back many years. How does this influence your interpretation of what follows?

3. On page 8, Leda’s grandfather offers some advice: “All it takes is for your enemies to join forces with your unlucky stars and then suddenly there you are, encircled, nowhere to run, and what is there left for you to do? I’ll tell you what’s left, a simple choice. Either you can die right there or you can flee to another land and start a new life with nothing but your skin and what’s inside of it.” What scene, or scenes, is this foreshadowing? How does this advice relate to the underlying themes of the book?

4. Why does Leda’s father stop playing the violin after Cora’s suicide?

5. Mount Vesuvius is an emotional as well as a physical landmark for Leda. What does it represent?

6. Although this is clearly Leda’s story, at several points in the novel De Robertis shifts to another character’s point of view—for instance, Fausta’s as she and Leda are preparing to disembark in Argentina. What purpose does this serve?

7. Why doesn’t Leda go back to Italy as soon as she can? Do you think she might have found happiness if she had?

8. When Leda hears the old man playing the tango, she has an emotional response: “The sound ensnared her. It invaded her bones, urged her blood. She didn’t know herself; it now occurred to her that she knew nothing, nothing, nothing about the world, could not have known a thing when she didn’t know the world contained this sensation, such sound, such wakefulness, a melody as rich as night.” (page 93) Why does the music move her so much?

9. In De Robertis’s hands, the tango is almost a character. Can you think of other types of music that might merit similar treatment?

10. Have you ever seen the tango performed? Did you know anything about its origins and history—how it started from an amalgamation of immigrant voices and musical styles, and that it was first performed in courtyards and brothels? What similarities does the history of tango have to the American blues, if any?

11. What does Leda’s cross-dressing indicate about the plight of women in the early part of the twentieth century? Compare that to contemporary gender-driven mores.

12. What is the significance of Kyrie eleison, “lord have mercy,” which Cora hums in one of her bouts of public madness? Why does that episode loom so large for Leda?

13. What prompts Leda to abandon her gig at Il Sasso for Santiago?

14. More than once, De Robertis mentions that in Argentina nicknames, once assigned, are nearly impossible to shake. Why does Dante intentionally use Santiago’s given name?

15. On page 264, Carmen and Dante discuss freedom. “‘Money doesn’t free a woman,’” Carmen says. What does? Which women are free in The Gods of Tango?

16. Carmen names her club Cabaret Leteo, after the river in the underworld from which people drink to forget. “‘Forgetting is joy,’” Carmen says. Why does she believe this?

17. As a man, Santiago has more freedom than any woman, although his grandfather was a slave. What role does race play in the novel?

18. Rosa puts on a man’s suit to perform, but she never expects anyone to treat her like a man. How is her theatricality different from Leda’s secretive approach? Who is more brave?

19. Does Carmen’s reaction when she discovers Dante’s secret surprise you? What did you expect to happen?

20. Why did the people of Alazzano castigate Cora and not her father?

21. Compare Alma, Carmen, and Rosa. Other than Dante, what do they have in common? How are they different?

22. What does the story Fausta tells her son, about the brother and sister who repopulate the world, mean?

23. Why does Dante accept Miriam as his daughter?

24. Leda’s cousin Cora haunts the novel. Why does Dante call for her, not Rosa, at his moment of death?

25. Junot Díaz calls Carolina De Robertis “an extraordinarily courageous writer.” Do you agree? What other writers would you compare her to?

Carolina De Robertis, a writer of Uruguayan origins, is the author of two previous novels, Perla and The Invisible Mountain (a Best Book of 2009 according to the San Francisco Chronicle; O, The Oprah Magazine; and Booklist), and the recipient of Italy’s Rhegium Julii Prize and a 2012 fellowship from the National Endowment for the Arts. Her writings and literary translations have appeared in Zoetrope: All-Story, Granta, The Virginia Quarterly Review, the anthology Immigrant Voices, and elsewhere. Her novels have been translated into seventeen languages. She lives in Oakland, California.
Learn More About The Gods of Tango
print

little scratch
Back to Top