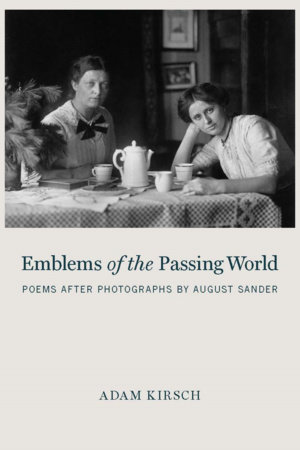 Emblems of the Passing World

Poems after Photographs by August Sander

About Emblems of the Passing World

Through his portraits of ordinary people—soldiers, housewives, children, peasants, and city dwellers—August Sander, the German photographer whose work chronicled the extreme tensions and transitions of the twentieth century, captured a moment in history whose consequences he himself couldn’t have predicted. Using these photographs as a lens, Adam Kirsch’s poems connect the legacy of the First World War with the turmoil of the Weimar Republic with moving immediacy and meditative insight, and foreshadow the Nazi era. Kirsch writes both urgently and poignantly about these photographs, creating a unique dialogue of word and image that will speak to all readers interested in history, past and present.

Adam Kirsch is the author of two collections of poems and several books of poetry criticism. A columnist for Tablet, he also writes for The New Yorker and The New York Review of Books. He lives in New York City with his wife and son.

“The writing is penetrating and clear, with subtle rhymes and simple lines that build toward sad epiphanies. That approach is beautifully apt as the work considers laborers across class lines, women trapped by losses or limited roles, and thinkers who shaped their time or stood silent.” —The Washington Post

“[An] elegant little book…Kirsch looks deeply into Sander’s haunting portraits of everyday German people, often unidentified, at the time of World War I and during the Weimar Republic. Writing with hindsight on what the future will bring to his figures, Kirsch also considers the blindness of our own present moment.” —The New Criterion

“Sander’s images serve as a strangely engaging roadmap to the possibilities that exist within any moment, and the voices that echo through Kirsch’s singular language serve to remind us of our own splendidly imperfect humanity.” —The Los Angeles Review of Books

“A gem.” —The Jewish Week Online

“Adam Kirsch has produced in these balanced, unflinching poems a unity of artistic perspective of great value in our troubled times.” —New York Journal of Books

“One of those rare poetry collections where a poet, speaking for, with, and about those who have come and gone, invokes their timeless humanity, and ultimately ours. In Kirsch’s hands these old-world faces stare at us with the bemused wisdom of those already looking forward to a time when we’d be looking back at them, asking us if what we’re seeing on their grim faces is indeed the muted forebodings of the horrors yet to come. Kirsch sees through their stilled exteriors with guile, compassion, and forgiveness. I love this book.” —André  Aciman, author of Harvard Square: A Novel

“I am stunned by this book—the psychological insight, the meticulous artistry, the deep feeling that Kirsch’s words don’t so much project as release, as if something in all these mute faces had been finally freed.  The combination of form and fleetingness is truly uncanny, like chiseled oblivion.” —Christian Wiman, author most recently of Once In the West: Poems

Praise for Rocket and Lightship:

“It is fashionable today to mourn the paucity of public intellectuals in America. Meet Adam Kirsch, one of the very best literary/cultural critics writing today—a critic in the grand tradition of Edmund Wilson or Lionel Trilling. Rocket and Lightship is a delight to read.” —Marjorie Perloff, author of Unoriginal Genius: Poetry by Other Means in the New Century

“Adam Kirsch is one of the best of our cultural and literary critics…He writes with stunning force and beautiful lucidity.” —Janet Malcolm, author of Forty-one False Starts: Essays on Artists and Writers

“Adam Kirsch is the most exciting, the most serious, the most courageous young poet-critic in America.” —James Wood, author of The Fun Stuff

“Philosophically engaged rather than philosophically detached, Adam Kirsch brings a singular and welcome seriousness to contemporary verse. In his new collection, he trains a shrewd eye on the violence and vulgarity of our age, but also celebrates, intelligently and convincingly, the larger and enduring realities of art, science, peace, and faith. These excellent poems are triumphs of craft and hope.” —Timothy Steele, author of Toward the Winter Solstice

“In these unusually thoughtful, elegant poems, Adam Kirsch has consistently achieved the same end as the ‘hypothetical’ light of the collection’s sole sonnet: he has ‘made our dark matter visible.’” —Jacqueline Osherow, author of Whitethorn: Poems

Emblems of the Passing World