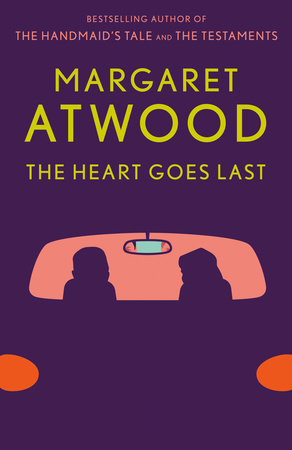 Stan and Charmaine, a young urban couple, have been hit by job loss and bankruptcy in the midst of a nationwide economic collapse. Forced to live in their third-hand Honda, where they are vulnerable to roving gangs, they think the gated community of Consilience may be the answer to their prayers. If they sign a life contract, they’ll get a job and a lovely house . . . for six months out of the year. On alternating months, residents must leave their homes and serve as inmates in the Positron prison system. At first, this seems worth it: they will have a roof over their heads and food on the table. But when a series of troubling events unfolds, Positron begins to look less like a prayer answered and more like a chilling prophecy fulfilled. The Heart Goes Last is a vivid, urgent vision of development and decay, freedom and surveillance, struggle and hope—and the timeless workings of the human heart.

1. If you were in Stan and Charmaine’s situation, would you sign up for the Positron Project?

2. What is the significance of Charmaine’s memories of Grandma Win and her cheerful aphorisms?

3. Do you think society could actually break down to the point that it does in the novel? Why or why not?

4. Bright colors figure into many descriptions in the novel, and act as a counterpoint to the drab quality of daily life in Positron. Stan and Charmaine’s lockers are pink and green; the Alternates’ lockers are purple and red; prison uniforms are orange; the knitted bears are blue. Do you think the colors assigned to the various objects are intentional or incidental?

5. How did your attitudes toward Stan and Charmaine change over the course of the novel?

6. The novel’s title has surprising significance. When it was revealed, did you find it a clever twist or macabre and disturbing?

7. Charmaine is placed in an impossible situation when she discovers Stan on the gurney. Did she make the right choice? What would you have done?

8. No one is who he or she seems to be in Consilience. Did the shifting identities of characters make you wonder what their previous lives had been like before they came to Consilience? Would they have been better off “outside the walls”?

9. Could the Positron Project ever be a viable solution to solving societal upheaval?

10. The author is known for embracing emerging technologies, but in this work medical science and robotics are used in sinister and manipulative ways. In this sense is The Heart Goes Last a cautionary tale?

11. “The world is all before you,” says Jocelyn at the close of the novel. How do you think Charmaine will adjust to freedom?

Margaret Atwood, whose work has been published in thirty-five countries, is the author of more than forty books of fiction, poetry, and critical essays. In addition to The Handmaid’s Tale, her novels include Cat’s Eye, short-listed for the 1989 Booker Prize; Alias Grace, which won the Giller Prize in Canada and the Premio Mondello in Italy; The Blind Assassin, winner of the 2000 Booker Prize; Oryx and Crake, short-listed for the 2003 Man Booker Prize; The Year of the Flood; and her most recent, MaddAddam. She is the recipient of the Los Angeles Times Innovator’s Award, and lives in Toronto with the writer Graeme Gibson.
Learn More About The Heart Goes Last
print

The Year of the Flood

The Book of Strange New Things

The Incendiaries
Back to Top