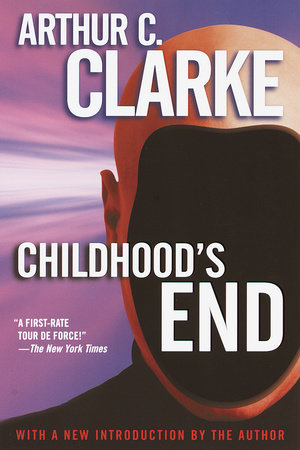 How will the world end? If we accept the conclusions of Childhood’s End, instead of a nuclear holocaust we will expect to see a Golden Age, during which all world crises will be resolved and all social problems will evaporate, followed by a final cataclysm triggered by a source from which we least expect it.

The beginning of the end is heralded by the Overlords, mysterious aliens in gigantic silver ships from an unknown planet. Led by the Supervisor, Karellen, these godlike creatures– superintelligent and seemingly allpowerful–are heard but not seen by humans, at least not for their first decades on Earth. During that period they speak directly to the earth’s population only once–to announce that they are now in charge. For the most part, the Overlords’ dictates are expressed by their chosen human messenger, Stormgren, the Secretary-General of the United Nations. But their actions speak louder than their few words. They diffuse a nuclear attack, stop all cruelty to animals, and decisively end racial discrimination in South Africa.

Although the Overlords’ reforms do benefit humanity, not all people take kindly to having peace and happiness imposed on them by beings they cannot see and whose motives they cannot deduce. Even Stormgren, who applauds the Overlords’ every move, still wishes he knew who his employers were. After a band of anti-Overlord renegades kidnap Stormgren to pump him for facts about Earth’s anonymous masters, the urgency of their demands infects the hostage himself.

Once he is freed (after Karellen arranges his escape), Stormgren sets his own plan–to expose his favorite Overlord–into motion. A scientist’s aid enables Stormgren to illuminate the darkened chamber where he meets with Karellen on the spacecraft. But the Secretary- General tells no one what he has seen, and the rest of the world has no choice but to wait until the Overlords voluntarily show themselves.

·late 1970’s–The Overlords arrive and begin their administration of Earth’s affairs
·early 1980’s–World Federation commences. Karellen promises that Overlords will reveal themselves to all humans in fifty years.
·2030’s–The Overlords keep their promise, to humankind’s dismay.

Not even two generations of the aliens’ benign yet absolute jurisdiction fully prepare humanity for that initial sight. Karellen and his compatriots are as huge as their resonant voices indicate–twice as tall as natives of Earth. Their fourteen fingers, slits in their cheeks for breathing, and body-covering like armor are foreign enough, but it is the barbed tail, winged shoulders, and tiny horns that strike terror into observers’ hearts. Despite the fact that religions based on miracles and deities no longer exist, Earth automatically identifies the Overlords with the fallen angel, the Devil himself.

After the initial shock, people learn to mingle almost comfortably with Overlords in social situations, such as the house party in Africa to celebrate the marriage of Rupert Boyce, a jungle veterinarian, and Maia Rodricks. Always a fantastic host, Rupert boosts his reputation by inviting and Overlord scientist, Rashaverak, to the gathering. Even this presence is upstaged by the offbeat party game Rupert organizes for an intimate group of last-to-leave guests. Seated around a 21st-century version of the Ouija board, a device that purportedly puts humans in touch with supernatural intelligence, six people pose questions while a seventh takes notes and the Overlord looks on. The final query, from Jan Rodricks, a young, Black engineering student and brother of the bride, drastically alters the course of the lives of three gameplayers, including Jan’s.

"Which star is the Overlord’s sun?" he wants to know. The device spells out a code, and Jean Morrel, a 26-year-old player with an affinity for the occult, faints on the spot. (For George Greggson, her date, Jean’s sudden demonstration of helplessness is the impetus for a marriage proposal.) Jan researches the code at an astronomical library and confirms it as the number assigned to a star in the constellation Carina. As curious about the Overlords’ origins as Stormgren had been about their physical appearance in the 20th century–and frustrated that the masters of Earth restricted humans’ space travel–Jan resolves to use his new knowledge in an unprecedented way.

The countdown to Earth’s death continues:

·2050’s–Jan Rodricks stows away on an Overlord supply ship headed towards the beings’ home. Karellen decrees that "the stars are not for man."
·2060–George and Jean Greggson and their children, Jeffrey and Jennifer Anne, move to the artists’ colony, the island of New Athens. At age seven, Jeffrey is saved from a tidal wave by an Overlord, and starts dreaming about strange and distant planets.
Rashaverak explains to George that Jeffrey and Jennifer have both been under surveillance because they not human but, instead, the first generation of a new life form on Earth. He also confides in George the Overlords’ century-old secret, their purpose for coming to Earth: they are not the masters of the human race, but the guardians and midwives of the coming one. Enjoy your children while you can, he ominously advises George. "’They will not be yours for long.’"
·2070’s–In his last address to the people of Earth, Karellen proclaims that he and his fellow Overlords have been directed by their own master, the Overmind, to help prepare human beings for the loss of all their children and for the end of the human race.

Once the children are evacuated to a single continent by the Overlords, many of the heartbroken parents, including Jean and George Greggson, take their own lives.

In the 22nd, and final, century, Jan Rodricks returns to Earth following his 80-year excursion to and from the Overlords’ planet. He has aged only six months because he has been traveling at the speed of light. Karellen fills him in on the details of humankind’s demise and the metamorphosis of the powerful children who the Overmind is "molding. . . into one unit before it can wholly absorb them into its being." Not even Jan’s museum-style tour of the Overlords’ home could have impressed him as much as the sight of the young ones who are stripping Earth of all other forms of life and turning the moon upon its axis.

As the children start toying with Earth’s own movement, the Overlords leave the planet, but Jan, who says he has "seen enough of the universe," stays on. From the Overlords’ deserted base he broadcasts running commentary to their ship as he witnesses the children’s fiery transformation. When they fuse with the Overmind, they consume the last traces of Earth, including Jan. Finally, after 150 years, Karellen–not a god but a dedicated, patient servant– can turn his attention to his next assignment.

In a 1985 magazine article, Clarke updates his personal view of the future. Here are some of his predictions:

·That, unlike the humans in Childhood’s End, we will not meet extraterrestrials in the 21st century.
·That students in a standard classroom of the 21st century will be taught by a robot or computer.
·That by the 100th anniversary of the destruction of Hiroshima, (August 6, 2045) we will have done away with nuclear weapons.
·That there would be no World War III.
·That by 2050 earthlings will have walked on Mars.

For more of Clarke’s well-educated guesses about Life for coming generations, see "The 2001 Prophecy Quiz" by Robert Weil and Peter Tyson in the July 1985 issue of Omni Magazine, pp. 38-40.

1. Why does Wainwright oppose the Overlord’s plan for "World Federation"?

2. Why would the Overlords choose a human spokesperson instead of representing themselves? Why the Secretary-General of the United Nations?

4. What ideas and events prompt Stormgren to try to expose the Overlords’ identity?

5. After Stormgren sees Karellen, why does he tell the scientist Duval–and, thirty years later, the reporter–that he had seen nothing?

6. Since the people of Earth in the 21st century have lived their whole lives under the control of the Overlords, why does their first sight of the Overlords terrify them?

7. What are the possible reasons for Rashaverak’s and Karellen’s special interest in Rupert’s game? Why is Jan so interested in the results?

8. In a world practically free of crime, unemployment and hunger, and filled with all manner of entertainment, what purpose does a colony like New Athens serve?

9. Why is George concerned, rather than merely grateful, that the Overlords have saved Jeffrey from the wave?

10. Why will the Overlords "always envy" the human race?"

11. How does Jan manage to stay young although he’s been away from earth for eighty years?

12. Do you think Jan is happy that he has fulfilled his dream of seeing the Overlords’ planet? Why or why not?

13. Might Karellen have known that Jan would be a stowaway on an Overlord supply ship and, if so, why doesn’t he stop Jan from carrying out his plot? Why isn’t Jan punished for his action?

Childhood’s End presents one person’s imaginings of what the world will be like one hundred years from now, but these ideas are by no means gospel. How do you envision the world to be in the late 21st century, the time of, perhaps, your children’s children? Will the world still exist? Will cures be found for cancer, the common cold, AIDS, cystic fibrosis and other diseases now called incurable? Will war, poverty and violent crime be eliminated or will these problems grow worse? How might scientific discoveries and advances of current research make life for your grandchildren different from your own? Will inflation cause prices of goods and services to soar to unbelievable heights by today’s standards? Or might money no longer be in use? Consider the future you hope, or fear, will be, then write out your vision of life on earth a century from now.

Vocabulary skills building–Ask students to choose the word or phrase in parentheses that comes closest in meaning to the bolded word originally used in the sentence:

"For help with his plan for space travel, Jan Rodrick called on Professor Sullivan, the ichthyologist, or specialist in the study of (plants/mammals/fishes)."

"Although Jan stood above the clouds among the uppermost peaks of the Overlords’ city, he felt no vertigo (dizziness/happiness/fear of falling)."

"George and Jean Greggson were shocked to learn that the baby they knew as Jennifer Anne was really a chrysalis (reptile/covering for an undeveloped state/daughter of Rashaverak)."


The Great Debate: How do your students feel about the idea of a World Federation? How might we benefit from this "One World" governmental system? Would there be drawbacks to such a plan? Could such a plan work if there were no Overlords on earth to enforce it? (Students might be asked to choose sides and form classroom political parties based on "pro-or anti-Federation" platforms. Each party should then choose spokespersons or candidates who will attempt to win their classmates over in panel discussions or timed debate/rebuttal sessions. After each side presents its case, onlookers can cast their votes for or against World Federation.)


Learn More About Childhood’s End
pdf
Back to Top