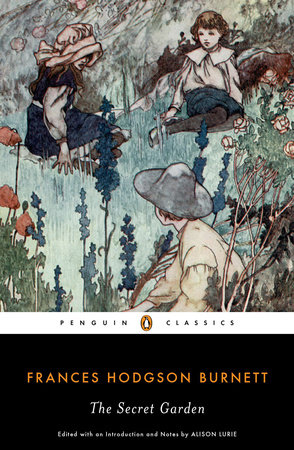 Mary Lennox has no one left in the world when she arrives at Misselthwaite Manor, her mysterious uncle’s enormous, drafty mansion looming on the edge of the moors. A cholera epidemic has ravaged the Indian village in which she was born, killing both her parents and the “Ayah,” or Indian servant, who cared for her. Not that being alone is new to her. Her socialite mother had no time between parties for Mary, and her father was both too ill and too occupied by his work to raise his daughter. Not long after coming to live with her uncle, Mr. Craven, Mary discovers a walled garden, neglected and in ruins. Soon she meets her servant Martha’s brother Dickon, a robust country boy nourished both by his mother’s love and by the natural surroundings of the countryside; and her tyrannical cousin Colin, whose mother died giving birth to him. So traumatized was Mr. Craven by the sudden death of his beloved wife that he effectively abandoned the infant Colin and buried the keys to the garden that she adored. His son has grown into a self-loathing hypochondriacal child whose tantrums strike fear into the hearts of servants. The lush garden is now overgrown and all are forbidden to enter it. No one can even remember where the door is, until a robin leads Mary to its hidden key. It is in the “secret garden,” and with the help of Dickon, that Mary and Colin find the path to physical and spiritual health. Along the way the three children discover that in their imaginations—called “magic” by Colin—is the power to transform lives.

While The Secret Garden is an exquisite children’s story, its timeless themes, precisely drawn characters, and taut narrative make it worthy of the serious discussion due any classic novel. It is a tale of redemption, rich with biblical symbolism and mythical associations. In Mr. Craven, his stern brother, and Mary’s parents, readers have found evidence of a fallen adult world. Consequently, Mary and Colin are physically and spiritually malnourished, and, in the words of Burnett, down-right rude. Mr. Craven’s redemption at the hands of Colin and his niece ensures the return of good rule to the ancient, gloomy house and of health to the children. Dickon—constantly surrounded by fox, lamb, and bird—evokes St. Francis or Pan. His mother, Mrs. Sowerby, a plain-speaking Yorkshire woman, resembles the archetypal earth mother and embodies an ancient folk wisdom seen neither in Craven nor in Mary’s deceased parents. Invoking traditional nature myths, Burnett aligns the spiritual growth of Mary and Colin with the seasons. Mary arrives at Misselthwaite in winter a dour and unhealthy child. She begins her gardening in the spring, and as crocuses and daffodils push up through the warming earth, her body begins to bloom and her manners to soften. Summer sees the complete regeneration of both Mary and Colin, and by the time Craven returns to Misselthwaite in autumn, the children are harvesting the fruits of their labor—health and happiness. Finally, the overarching symbol of the book is the secret garden, a lost paradise of love and happiness—a version, perhaps, of the Garden of Eden, now reclaimed and rejuvenated.

Throughout The Secret Garden, Burnett seamlessly intertwines the elements of her craft, moving easily between the teasing narrative and dialogue that speaks to a child and the strands of dramatic development, complex characters, theme, and symbolism. Indeed, it is this extraordinary balance that makes

The Secret Garden not just “one of the most original and brilliant children’s books of this century,” as Alison Lurie says in her introduction to the Penguin Twentieth-Century Classics edition, but also an enduring novel of ideas.

Frances Eliza Hodgson was born on November 24, 1849, in Manchester, England, the third of Edwin Hodgson’s and Eliza Boond’s five children. Her father ran a prosperous firm which specialized in the trade of decorative arts for the interiors of houses. At the time, Manchester was experiencing a textile boom which infused the town with a rising middle-class, and because these families were erecting magnificent houses, Hodgson’s merchandise was in demand. The prosperity of the Hodgson family was cut short in 1854 when Edwin suffered a stroke. Even more devastating to the family fortune was the American Civil War, which caused a cessation of cotton shipments from Southern plantations, crippling Manchester’s economy. Eliza Hodgson decided to emigrate to America, and in 1865, when Burnett was sixteen, the family settled in a small town about twenty-five miles from Knoxville, Tennessee. This move would prove instrumental in Burnett’s development as a writer. Although she had always been obsessed with storytelling and often amused her schoolmates by acting out tales of adventure and romance, the financial strain of the emigration caused her to turn to writing as a means of supplementing the family’s income. The move from industrial England to rural America was for the family a journey to the green, natural world that would become a central theme in many of Burnett’s later works, including The Secret Garden.

Burnett’s first published story, “Miss Carruthers’ Engagement,” appeared in a magazine called Godey’s Lady’s Book in 1868. After the death of her mother in 1872, the family became increasingly dependent on her writing income. She accelerated her career as a popular writer and sold stories to many magazines. In September of 1873 she married Swann Burnett, a doctor from Tennessee who was preparing to specialize in the treatment of the eye and ear. He wished to further his specialty by studying in Europe, and Burnett financed his wish, once again becoming responsible for the bulk of her family’s income. In 1874, she gave birth to her son Lionel and began work on her first major novel, The Lass o’ Lowries. The critical response was encouraging, and many reviews compared Burnett’s work to that of Charlotte Brontë and Henry James. In 1879 she published her novel Haworth, her first attempt at serious fiction. Later that same year, one of her first children’s stories appeared in St. Nicholas, a magazine in which she would publish for years to come. It is at this time that Burnett, who was constantly battling illness, acquainted herself with the philosophies of Spiritualism, Theosophy, Mind Healing, and Christian Science. These philosophies’ ideas about the healing powers of the mind became a crucial motif in much of her writing, most notably in A Little Princess, The Secret Garden, and The Lost Prince.

In 1886 Little Lord Fauntleroy, the book that transformed Burnett’s life, was published. It became a runaway bestseller in America and England. While the success of the book branded Burnett a popular and romantic writer rather than a serious artist, it provided her with enough income to free her from an unhappy marriage and allow her to travel through Europe. In 1890 Burnett’s first son Lionel was diagnosed with consumption and died that same year. By 1898, Burnett and Swann divorced by mutual consent, and she leased a country house in England where she immersed herself in her passion for gardening. The estate was surrounded by several walled gardens, one of which, a rose garden, served as her outdoor workroom. It was here that the idea of The Secret Garden was born.

Over the course of her life, Burnett wrote more than forty books, for both adults and children. While her adult novels are considered to be quite sentimental, her children’s books have withstood the fickleness of literary fashions. The Secret Garden, the story of how Mary Lennox and her friends find independence as they tend their garden, has been described as one of the most satisfying children’s books ever written. Frances Hodgson Burnett died of congestive heart failure on October 29, 1924.

The Fall of Troy

Silver
Back to Top