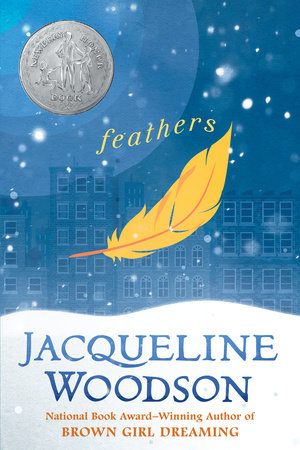 INTRODUCTION
It’s been a long and snowy winter for Frannie and her classmates, and studying poetry can make it seem endless. “Hope is the thing with feathers …” That’s how one poem begins, but Frannie is not really sure what to make of it until a boy as white and quiet as the falling snow steps into her world. After a winter like this one, nothing will ever be the same again . . .

Feathers is set in the 1970s. Although the civil rights movement has already happened, there still seems to be a deep divide between black and white in the story.

Before the Ever After
Jacqueline Woodson

See You in the Cosmos
Jack Cheng

The Other Half of My Heart
Sundee T. Frazier

Al Capone Does My Homework
Gennifer Choldenko
Back to Top