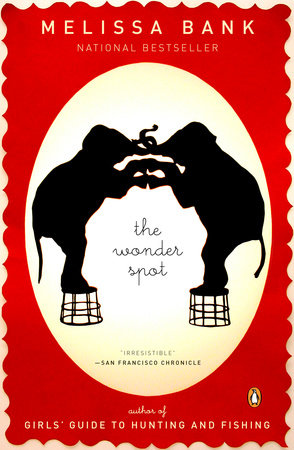 INTRODUCTION
What is it that defines a person’s identity? Is it the grand events—births, marriages, deaths—or the small moments, the revelations that take us by surprise? In Melissa Bank’s new novel, The Wonder Spot, destiny is in the details as she focuses on a series of small discoveries and how they build a life. The life in question is that of Sophie Applebaum, Bank’s always charming, occasionally awkward, new heroine. Narrated in Sophie’s comic, confessional voice, The Wonder Spot charts her progress through a series of interconnected stories; from boys and bat mitzvahs to careers and commitment, each episode is a milestone in Sophie’s journey. As she stumbles along, failures and successes begin to add up and she discovers that identities aren’t found, they are formed—one moment at a time.

From adolescence to adulthood, Bank outlines Sophie’s joys and miseries in falling in love, finding a job, and figuring herself out. Although initially more defined by what she isn’t than what she is, Sophie develops herself, subtly and significantly, through her friends, lovers, and family. Bank is attentive to the nuances of Sophie’s relationships in all stages of her life, deftly illustrating both their strength and fragility. While some friends inspire Sophie to be bolder and braver than she might otherwise be (ditching Hebrew school or buying an outrageous new dress), a few fade away under the strain of competition or jealousy—often surfacing in relation to romantic issues. In fact, Sophie moves through a series of romantic connections and friendships, refining her sense of what she needs and what she’s willing to give for love. But those who remain closest to Sophie are her two brothers, brilliant, dutiful Robert, and dashing, irresponsible Jack; they, along with the rest of her family, bring both comfort and complications into her life. As Sophie begins to establish her identity on her own terms, issues of independence, infidelity, and religion alter her understanding and expectations of family, friends, and herself. Yet the one constant amid all is Sophie’s wry, self-deprecating sense of humor; no matter the confusion, frustration, heartache, or joy. Sophie’s stumbles are as hilarious as her successes are heartwarming, and her relationships with others lead her toward her own identity: who she is, what she wants, and where she is going.

With her celebrated honesty and humor, Melissa Bank has created a loving and layered look at the everyday experiences that define us. As the author of the wildly successful The Girls’ Guide to Hunting and Fishing, Bank is known for her warm and witty insight into love and life, and while her previous book established her popularity, this newest work is sure to secure it.The Wonder Spot delivers Sophie through the slings and arrows of a real life, filled with mistakes and minor victories but most especially with the moments when it all begins to make sense.

Melissa Bank, author of the phenomenal bestseller The Girls’ Guide to Hunting and Fishing, won the 1993 Nelson Algren Award for short fiction. She has published stories in the Chicago Tribune, Zoetrope, The North American Review, Other Voices, and Ascent. Her work has also been heard on “Selected Shorts” on National Public Radio. She holds an MFA from Cornell University and divides her time between New York City and East Hampton.

AUTHOR INTERVIEW
What inspired the title, The Wonder Spot?

What inspired the title was a photograph from the forties of a bench or maybe a glider with the sign THE WONDER SPOT above it.

Did you write the book chronologically or did some sections of the book develop before others? What do you like most and least about the process of writing?

I didn’t write the book at all chronologically. I was all over the place—Sophie at thirty-eight and then twenty-one and back to twelve, like that.

What I like most about writing is when I’m in the middle of a story and seeing everything and hearing everything and the story is more real to me than my real life; I’ve become my narrator and am barely conscious of myself at all. What I like least is when I’m completely, cripplingly self-conscious, which usually happens when I’m trying to start a story and can’t. I’m on the outside, and all I can do is write studied, dead sentences and all I can see are my own limitations—your basic writer’s block, which is my one field of expertise.

Love is not a happy-ever-after affair in your books but a trial-and-error process. Despite the fact that Hollywood continues to churn out the Prince Charming stories, why do you think your realistic portrayal of the decidedly non-fairy tale modern romance has struck a chord with so many readers?

I’m having trouble wrapping my mind around this question. I guess what I think is that love is a great mystery, and there are a million different versions and all of them are unique, and we all just try to figure it out as we go. Maybe everyone has Hollywood or Hallmark ideas about love—but also we want something authentic. Practically everyone I know struggles.

Why did you set your two novels in and around New York? How important is setting to your work?

Really important. In both books, the suburbs represent the comfort and limitations of home—the family of origin, as the shrinks say—whereas New York, however hard it can be, represents possibility.

Can you describe your experience of being a young woman in New York?

That first year, when I was working as an editorial assistant in publishing, I lived with Amy, my best friend from college, in a sublet in Midtown. The apartment was tiny—there wasn’t even enough room to walk around the bed—and Amy went to sleep early. I didn’t mind. I was just beginning to write seriously, and I’d go into the bathroom, which was big compared to the rest of the apartment, and write in the tub.

After a while, though, we both began to feel kind of trapped. We didn’t really like our jobs, and we could barely live on what we made. Amy waited tables on weekends in upstate New York, where she’d grown up and her boyfriend still lived. One night, we got this idea—I don’t remember whose it was—of renting a house in the country and commuting to work. We envisioned a primitive cottage, maybe without electricity, maybe in the woods. The idea sustained us for months. “We’re going to the country,” we’d say, as a kind of rallying cry. We didn’t, though—or I didn’t. When our sublet was up, I moved into another one. Amy quit her job, moved upstate and wound up marrying her boyfriend.

Do you think modern romance is more or less difficult than it was for your parents’ generation? What kind of example did your parents set for you?

I don’t know if it’s more or less difficult. What I think about is how pressured women must have felt to get married. I felt that pressure earlier in my life and it was crushing. Even thinking about it makes me feel like I have a plastic bag over my head.

My parents seemed to love each other very much; I think they were devoted to each other. But I never saw anything there I could emulate. My mother was very traditional—is very conventional—and deferring to my father seemed to come naturally to her.

You’ve been compared with J. D. Salinger and John Cheever among others. Would you say that those are fair comparisons? From which writers do you draw inspiration?

What a beautiful, beautiful question. What if I said, “Yes, I think it’s fair to compare me to Salinger and Cheever”? I met someone recently who said, “Like Bob Dylan, I . . .” and, “I write like Doestoevsky,” and I thought, Of course you do.

Bridget Jones: The Edge of Reason

The Other Woman
Back to Top