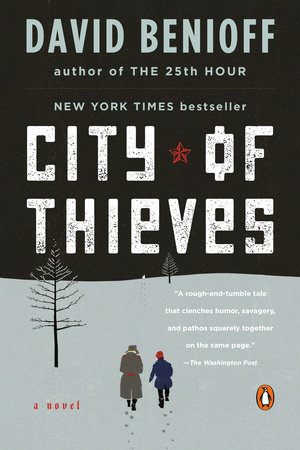 At the age of thirty-four, David, an Los Angeles–based screenwriter specializing in mutant superhero films, is asked to write an autobiographical piece for a trade magazine. Unable to muster any enthusiasm for his easy and undeniably pleasant American youth, he hops on a Florida-bound plane to interview his Russian grandfather about life in Leningrad during World War II. Mild-mannered Lev Beniov is reputed—by unspoken family lore—to have killed two Nazis in a knife fight that cost him a single fingertip. David asks to hear the true story, so Lev reaches into the distant past to share the horrors, privations, and adventures that the famously besieged city offered one young boy on the brink of manhood.

A Jew and the son of a poet who was “disappeared” by the NKVD (the Soviet secret police), Lev was nonetheless an ardent patriot who believed in the justness of the Soviet cause and enough of a naïf to still believe in the romance of war. Although too young to join the army, Lev refused to flee with his mother and sister, and proudly serves as commander of his apartment building’s volunteer fire brigade. “I was seventeen, flooded with a belief in my own heroic destiny,” (p. 9) he remembers. But his youth might still have passed uneventfully had a dead Nazi paratrooper not fallen onto his street one night. Lev and his friends—tempted by the prospect of chocolate or other contraband—break curfew to loot the body.

Lev alone is caught, arrested, and thrown into Leningrad’s infamous prison, the Crosses. His cellmate, Kolya, is a soldier who’s just been arrested for desertion and together the two await the dawn and almost certain execution. Lev is petrified, but Kolya is everything that Lev is not; boisterous and bombastic, handsome and charming, and annoyingly optimistic. “They’re not preserving us for the night just to shoot us tomorrow,” (p. 23) Kolya says as he drops off into a seemingly untroubled sleep. Miraculously, he is right. In the morning, the two are granted a reprieve conditional upon their acquiring a dozen eggs for the wedding cake of a powerful NKVD colonel’s daughter within five days.

The task is preposterous. It is January—smack in the cold heart of a harsh Soviet winter—and the city has been cut off from all supplies for months. Most of Leningrad barely staves off starvation with miserly portions of sawdust-filled ration bread, but Lev and Kolya gamely set off to find their grail in a city where rats are hunted for their meat and the bindings of library books are boiled down for their nutrient-rich glue.

At first, Lev loathes Kolya, who teases him about being a Jew and whose every word and action he finds insufferable. Yet as they wend their way through Leningrad’s black market underbelly and out into the battle-ravaged countryside, the timid, virginal Jew and his Cossack antithesis reveal themselves in ways that allow chinks of sympathy—and, ultimately, friendship—to grow.

A beguiling new novel from the acclaimed author and screenwriter of The 25th Hour, City of Thieves is a winning picaresque tale that illuminates the timeless struggles of growing up against the dramatic backdrop of Germany’s invasion of the Soviet Union.

David Benioff is an author and screenwriter. His first novel, The 25th Hour, was adapted into a popular feature film. His short story collection, When the Nines Roll Over, received critical acclaim. He lives in Los Angeles and New York City.

A CONVERSATION WITH DAVID BENIOFF

Q. City of Thieves begs the question: Did all this really happen to your grandfather?

No. My grandfather was born on a farm in Delaware. He became a furrier and died in Allentown, Pennsylvania. My grandmother (unlike the non-cooking grandmother in the book) made the best chopped chicken liver in the state. Neither one, as far as I know, ever visited Russia.

Q. David notes, “Truth might be stranger than fiction, but it needs a better editor.” (p. 4) How much “editing” did you do?

See answer to number one. A whole lot.

Q. How much additional research did you do to write this novel?

I had a wonderful teacher once, the novelist Ann Patchett. I asked her about the research she did for The Magician’s Assistant, and she told me to choose the single best book on the given subject and study it obsessively. Writers are always tempted to track down dozens of books to help give our make-believe stories that tang of authenticity, but often the problem with too much research is a writing style that seems too researched, dry and musty, and eager for a history teacher’s gold star of approval.

Unfortunately, my will was not strong enough for me to follow Ann’s advice. I did end up reading dozens of books on the Siege of Leningrad. In her honor, though, I picked one that became my Bible: The Nine Hundred Days by Harrison Salisbury. He was the first Western journalist to have access to Leningrad once the siege was lifted. He spoke firsthand with hundreds of Russians who survived the siege, and he collected as many diaries, journals, and letters as he could. The second most important book for me was Kaputt by Curzio Malaparte. A former Fascist, Malaparte was essentially an embedded journalist before the concept existed. He rode along with the German and Finnish forces during the early months of Barbarossa and his accounts provided me a necessary glimpse of the invaders’ mindset, tactics, and appearance.

Q. You’re a successful Hollywood screenwriter. The Kite Runner is something you recently adapted for film. Why did you make David a writer of “mutant superhero” movies?

David, the narrator of the prologue, is not David the guy writing these words. The David of the novel (who might or might not be David Beniov; it is not clear whether Lev Beniov is David’s paternal or maternal grandfather) is similar to me in many respects, but he’s not me. That said, I did write the screenplay for Wolverine, featuring a mutant superhero.

Q. In the novel, David “realized I had led an intensely dull life. . . . I didn’t want to write about my life, not even for five hundred words.” (p. 3) Would you have preferred—as the Chinese curse says—to live in “interesting times”?

Unfortunately, these are interesting times. The narrator goes on to say that he enjoys his life; and I do, too.

Q. At first glance, City of Thieves and The 25th Hour seem to tell very different stories—one is historical and set during a time of great societal upheaval, while the other is contemporary and deals with one man facing his own crimes. Yet both are ultimately about young men and friendship. What draws you to write a particular story?

That’s a hard question to answer. In both cases the stories were stuck in my mind for years before I wrote them. The 25th Hour was based on a short story I wrote in college. Seven years after I wrote the story, the characters were still chattering in my brain, which seemed to me a good sign that I wasn’t finished with them.

For City of Thieves I had the characters and story in 2000 but could never quite figure out how to write the novel. I kept shifting back and forth between first person and third person. I rewrote the opening page at least a dozen times. Finally, in September 2006, I got cracking for real.

Q. If you were in Lev’s place, do you think you would have chosen to stay in Leningrad or would you have left with your mother and sister? Why?

I don’t know. If something happened to my mother and sister on their way to safety, the guilt would probably destroy me. At the same, if you’re a teenage boy, living in the center of the greatest armed conflict in the history of the world, you don’t want to flee. You want to do your part and protect your city.

Q. A lot of what Lev sees and experiences could be described as tragic, yet his story is told with a lot of humor. What made you decide to give the novel its light-hearted tone?

I’m not sure if light-hearted is the right word for a story that includes cannibalism, forced prostitution, involuntary amputation, and starvation. What inspired the humor was reading the diaries of the Leningrad survivors. Their daily accounts of their struggles are often grim, but almost always hopeful and full of life. People continued attending (and performing in) concerts, plays, and poetry readings despite all the suffering around them.

Q. What are the differences between writing for film and writing a novel? What do you like and dislike about each?

Screenplays are much shorter: Twelve weeks and you’re done. A novel can take years. Writing a novel is an endurance sport, a marathon, while a screenplay (or a short story) is more of a middle-distance race—800 meters, say. To extend this possibly inane analogy, a poem would be a sprint in a stadium with no spectators.

A series for HBO. We’ll see if it ever gets made.

The Narrow Road to the Deep North
Back to Top