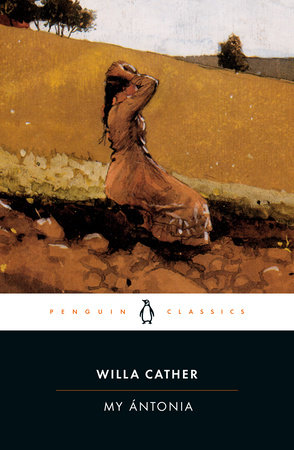 In part an elegy for a way of life almost vanished at the time of its writing, Willa Cather’s novel My Ántonia is also an inquiry into what it means to be an American. Cather explores characteristically American questions of identity through the novel’s central relationship, the friendship between transplanted Virginian Jim Burden and Bohemian immigrant Ántonia Shimerda. The novel begins with an introduction by an unnamed narrator, a woman who grew up in Nebraska with Jim and Ántonia. This introduction emphasizes the themes that shape the novel—movement, discontinuous identity, and romantic hopefulness. The narrator unexpectedly meets the adult Jim Burden on a train crossing Iowa, and the two renew their acquaintance and reminisce about Ántonia, who represents for both of them “the country, the conditions, the whole adventure of our childhood” (p. 5). At the narrator’s suggestion, Jim agrees to write a portrait of Ántonia. As he describes it, Jim’s portrait is impulsive, written without notes and without “any form” (p. 6). It is the spontaneous overflow of Jim’s recollected emotion, in keeping with his “naturally romantic and ardent disposition” (p. 4). Before giving the manuscript to the narrator, Jim titles it “Ántonia”; after frowning a moment, he adds “my.” The narrator notes that this “seemed to satisfy him,” without suggesting whether Jim’s title is a gesture of possessiveness, an acknowledgment of bias, or indicative of some other meaning (p. 6).

Jim begins his story, at age ten, with his first hearing of Ántonia on what seems to him “an interminable journey across the great midland plain of North America” (p. 9). The recently orphaned Jim, who is going to live with his grandparents, feels that “there was nothing but land: not a country at all, but the material out of which countries are made” (p. 12). Jim and Ántonia, passengers on the same train, are each challenged to feel at home in this land that initially produces the feeling of being “erased, blotted out” (p. 13).

It is Jim’s friendship with Ántonia that enables him to feel at home on the prairie farm. Mr. Shimerda’s plea to Jim to “Te-e-ach, te-e-ach my Ántonia!” gives Jim a purpose and a sense of competence (p. 26). His relationship with “Tony” and the adventures they share become the most important part of his life. What makes people who they are is one of the mysteriesMy Ántonia plumbs. To what extent is personality born, and to what extent made? Cather suggests that Jim is shaped by his early friendship with Ántonia, and also that he is drawn to her because they are fundamentally alike. Jim shares Ántonia’s love for her father, who comes to represent the culture and sensitivity that life on the prairie tends to crush. Like Mr. Shimerda and Mrs. Steavens, Jim recognizes that Ántonia is special and refers to her as “my Ántonia” (p. 171). Ántonia becomes a touchstone in the novel: other characters reveal themselves through their responses to her. Those who are generous and compassionate—Jim’s grandparents, Mrs. Harling, and the Widow Steavens—love and try to defend her. Those who are selfish and corrupt—Ambrosch, Wick Cutter, and Larry Donovan—seek to take advantage of her.

Although she is in this respect the novel’s still center, Ántonia is also an image of American freedom and mobility, as evidenced by her choosing to become a “hired girl” at the Harlings, and then by her leaving the Harlings when they object to her going dancing. Ántonia’s romance with Larry Donovan points up both Donovan’s corruption—he is happy to use and abandon her, as a lower-class immigrant girl—and Ántonia’s idealism. Her subsequent embrace of motherhood and farming highlights her vibrant and indomitable nature, the nature that Jim has always felt sets apart the Bohemian “hired girls” from the town girls. When Jim finds her again, she is married to a fellow countryman and has so many children that Jim is made “dizzy” by the sight of them (p. 252). He sees Ántonia’s return to farming as a return to a world of timeless realities that has escaped the corruption he associates with small-town life. Her life stands in implicit contrast to Jim’s own, which includes a childless marriage to a brittle socialite.

The past that Jim recalls so passionately is not only his own past, but also the past of the West. When we meet him in the introduction, he is working for the railroads that are transforming the West; the industrialized nation is encroaching on the agrarian world of Jim’s childhood. Cather suggests that Jim is looking back with longing on a time when the entire country (and he as well) was more innocent and hopeful. The novel’s epigram from Virgil’s Georgics, “Optima dies prima fugit,” is translated by Jim as, “in the lives of mortals, the best days are the first to flee” (p. 199). Each of Jim’s moves, after the first move to Nebraska, entails a loss—from the farm to Black Hawk, from Black Hawk to college, from college to work and a wife who does not share his past or his passion. Cather depicts a man who is eager to move away and contend with the larger world, but then spends his emotional energy attempting to recapture the past. Jim describes some memories as “realities” that are “better than anything that can ever happen to one again” (p. 245). The book ends with him going back over the road he and Ántonia traveled the night they first saw each other, giving him a sense of “what a little circle man’s experience is” (p. 273). Is Jim’s absorption in his childhood memories more a flight from adult disappointments or a valid recognition that those early days were more vital and meaningful? This deeply American novel, which engages the ideas of upward mobility and remaking identity, asks whether we can—or should—ever leave the past behind.

Willa Cather was born near Winchester, Virginia, in 1873. When she was nine, her family moved to Nebraska to join her paternal grandparents and uncle. Cather was profoundly affected by moving from the settled Virginia landscape to the untamed Nebraska prairie. On the farm, her neighbors included immigrants from Bohemia (now most of the Czech Republic), Sweden, Norway, and Denmark. Their pioneering lives and stories of the old country were among her strongest influences.

Taught at home by her grandmothers, Cather read Latin and the English classics. In later life, she cited Virgil as her first literary influence. While she was a schoolgirl, Cather’s family moved to the town of Red Cloud, the model for Black Hawk in My Ántonia, and she attended high school there. She worked her way through the University of Nebraska, planning to study medicine until a professor secretly submitted one of her essays to the Nebraska State Journal. Seeing her work in print convinced her to become a writer. After graduating, she worked for Pittsburgh’s Daily Leader and taught high school English. In 1905, she published a collection of short stories, and favorable reviews inspired her to move with her companion Isabelle McClung to New York City, where she became managing editor of McClure’s Magazine.

In 1912, Cather left McClure’s and published her first novel, Alexander’s Bridge, responding to author Sarah Orne Jewett’s urging that she make time to fulfill her creative gifts. With her novel O Pioneers! (1913), set on the Nebraska frontier, Cather achieved artistic and critical success as a novelist. In 1916, Isabelle McClung announced her intention to marry, and Cather visited Nebraska in an effort to regain her emotional equilibrium and artistic inspiration. There she renewed her friendship with Annie Sadilek Pavelka, the inspiration for Ántonia. My Ántonia, generally regarded as Cather’s masterpiece, was published in 1918.

Cather’s simple yet lyrical style and uniquely American subject matter led critics to recognize her as a major author during her lifetime. A Lost Lady (1923), The Professor’s House (1925), Death Comes for the Archbishop (1927), and Sapphira and the Slave Girl (1940) are among her most acclaimed books, as well as One of Ours (1922), which won the Pulitzer Prize. She was living with her companion Edith Lewis in New York City when she died on April 24, 1947.

Ellen Glasgow, Barren Ground (1925)
Dissatisfied with the role ordained for Southern ladies, Dorinda Oakley has a premarital affair. Its disastrous outcome leads her to direct her passions into farming and transforming the land.

Sarah Orne Jewett, The Country of the Pointed Firs (1896)
Jewett’s sketches and tales of life in a rural Maine community lyrically depict the pleasures of living close to nature. Cather considered it a classic of the same rank as The Adventures of Huckleberry Finn and The Scarlet Letter.

Sinclair Lewis, Main Street (1920)
Lewis indicts the insularity and priggishness of American small-town life through the tale of Carol Kennicott, a doctor’s wife who struggles to bring an appreciation of culture to the citizens of Gopher Prairie.

Carson McCullers, The Heart Is a Lonely Hunter (1940)
Mick Kelly, a tomboy alienated from the Southern society around her, seeks out and listens to those who are similarly outcast, including a black doctor, a Jew, a socialist reformer, and a deaf man.

Virgil, Georgics (37-30 BCE)
A treatise on agriculture in poetic form, the Georgics contains as much philosophy as practical advice about farming. Virgil projects the return of peace and harmonious life on the land after the Roman civil wars have ended.

Learn More About My Ántonia
print

The Power of Sympathy and the Coquette

Nostromo
Back to Top