The Sea, the Sea Reader’s Guide 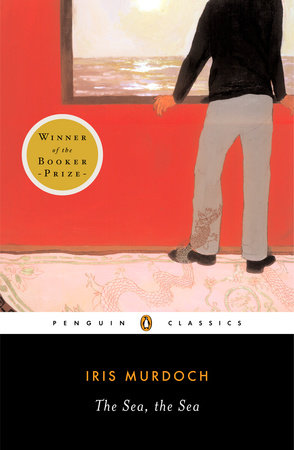 The Sea, the Sea Reader’s Guide

INTRODUCTION
“We are all such shocking poseurs, so good at inflating the importance of what we think we value.”—Iris Murdoch, The Sea, The Sea

Around this barb of (unheeded) reflection swirls the rich maelstrom of fantasies, plots, delusions, mind games, and awakenings that makes up Iris Murdoch’s popular 1978 Booker Prize-winning novel, The Sea, The Sea. As both a philosopher and a novelist, Murdoch always concerned herself in some way or another with the struggle to develop moral goodness and the concomitant effort to vanquish obsessive self-regard. In The Sea, The Sea, she dramatizes this characteristic moral concern to great effect on a stage crowded with self-absorbed artistic Londoners out of their element in a small seaside village.

As she explores the potent mixture of power, illusion, and self-delusion in retired actor, playwright, and theater director Charles Arrowby, Murdoch weaves a rich tapestry of startling events: old love affairs revive and die again, friendships sour into attempted murder, hallucinations (or are they?) portend ominous happenings, and the drowning embrace of the sea waits restlessly in the background. As Charles negotiates the turbulent swirl of events, an intricate portrait develops of a man bewitched and bewildered by his own powers of self-promotion and manipulation.

In an imaginative style at once realist and gothic, modern yet hearkening back to the age of the grand novel, The Sea, The Sea charts a person’s journey toward becoming a virtuous, spiritually mature human being. Taking up the moral development of the individual in a novel rather than a philosophical tract might strike some as a hazardous project, one that could mar both the clarity of thought so necessary for good philosophy and the narrative enchantment so integral to a good novel. And yet it was precisely in her novels that Murdoch so successfully discussed the vital issues of the moral life. Despite this marriage of philosophy and fiction-writing that is so prominent in her work, she always resisted the label of “philosophical novelist,” refuting any suggestion that her books might be merely anemic shufflings of philosophical positions by consistently delivering vibrant characters and powerfully effective plots in the realist tradition of such great nineteenth-century novelists as Dostoevsky and George Eliot. The Sea, The Sea is no exception in either the profound issues with which it grapples or in the richness of its fictional world.

By the time she came to write The Sea, The Sea, Murdoch had already published eighteen novels and several times been short-listed for the Booker Prize. Concentrating her well-honed talents on the tenacious demon of egotism, The Sea, The Sealays out an absorbing world of magic, illusion, and power—supernatural as well as theatrical, spiritual as well as worldly. Charles, in turning his back on the dazzling world of theater and retreating to a house by the sea to take stock of himself, write his memoir, and make a lasting testament, believes that he is eschewing the vulgar, self-absorbed power plays that constituted his adult life as a director. He believes that he is learning to be good. But self-regard and the manipulation of others are not so easily dispensed with. His egotism follows him—as do the many people that he has pulled under his spell over the years, such as his ex-lover Rosina, the ferociously glamorous actress whom he stole from Peregrine (her husband and one of Charles’s friends); the mysterious Buddhist cousin, James, who for years served as the linchpin for the elaborate network of envy that Charles carried with him from childhood into adulthood; and Lizzie, another actress and ex-lover whom Charles found “surprisingly easy to leave…when the time came.” Each steps into Murdoch’s dizzying and humorous narrative with a segment of Charles’s past, revealing him to have been a self-absorbed manipulator ignorant of his own motivations.

Echoing the prominent place that romantic love and sexual obsession often play in Murdoch’s novels, the greatest obstacle to the self-understanding and maturity that Charles so falteringly strives for proves to be his accidental meeting with his first love, Hartley, who, after her abrupt cessation of their chaste yet intoxicating relationship, became a rather ordinary housewife. Contrasting the thoughts and motivations of Hartley and her all-too-banally brutal husband Ben with those of Charles and his many neurotic visitors, the novel descends into a whirlpool of opposing wills and thwarted stratagems. With a morbid fascination brought about by Murdoch’s nimble control of this cast of idiosyncratic characters, we watch as serene reflection eludes Charles and he desperately grasps at the unrealistic phantoms spawned by the long lost object of his unconsummated childhood infatuation—leaving many victims in his wake. Throughout the novel, theatrical illusion, Tibetan magic, unconscious projections, supernatural interventions, and overripe fantasies all skew clear perception, distorting the characters’ awareness of events and entangling them in a confused web of self-centered power relations, even as they try to be virtuous.

In intricately charting the multifaceted deceptions of Charles Arrowby with stunningly subtle black humor, Murdoch adeptly elaborates on a motif that followed her in her lifelong concern with Good, with Love, and with Freedom: to be good one must transform the personal into the impersonal, one must escape one’s private self and concern oneself with others. Inspired by Shakespeare’s The Tempest and echoing Prospero’s attempt to transform magic into spirit, The Sea, The Sea brilliantly depicts the risks and self-deceptions of the spiritual life, the precarious and important distinction between imagination and fantasy, and the vital importance of negotiating these dangers.

Iris Murdoch (1919-1999) was one of the most acclaimed British writers of the twentieth century. Very prolific, she wrote twenty-six novels, four books of philosophy, five plays, a volume of poetry, a libretto, and numerous essays before developing Alzheimer’s disease in the mid-1990s. Her novels have won many prizes: the James Tait Black Memorial Prize for The Black Prince, the Whitbread Literary Award for Fiction for The Sacred and Profane Love Machine, and the Booker Prize for The Sea, The Sea. She herself was also the recipient of many esteemed awards: Dame of the Order of the British Empire, the Royal Society of Literature’s Companion of Literature award, and the National Arts Club’s (New York) Medal of Honor for Literature.

She was born in Dublin, Ireland, on July 15, 1919, the only child of Anglo-Irish parents. Her father was a bookish civil servant who had served as a cavalry officer during World War I; her mother had trained as an opera singer before marrying. The love of both literature and music instilled in her by her parents proved to be powerful formative influences, and she reportedly began writing at the age of nine. The family moved to London in Iris’s childhood and she grew up in the western suburbs of Hammersmith and Chiswich. The 1940s saw Iris receive a first-class degree in classics from Oxford, briefly become a member of the Communist Party (from which she resigned in disappointment), work in Belgian and Austrian refugee camps for the United Nations Rehabilitation and Relief Program, and befriend Jean-Paul Sartre, on whom she wrote what was to be her first published work, a critical study entitled Sartre: Romantic Rationalist (1953). In 1947 she took up a postgraduate studentship at Cambridge, studying philosophy under none other than Ludwig Wittgenstein. The fruits of these philosophical encounters went on to form an important part of her fertile talent as a novelist.

With three previous novels unpublished, Murdoch made her fiction-writing debut in 1954. Under the Net is a picaresque existentialist adventure set in London and Paris’s Left Bank that displays many of the traits for which her later work is so admired: a fast-paced plot, finely wrought settings, imaginatively developed characters, and a strong philosophical concern with moral issues and ethical crises. Surpassing the somewhat derivative existentialist strictures of this nevertheless stunning debut, Murdoch published almost a novel per year throughout the 1950s, ’60s, and ’70s and continued at a slightly less feverish pace throughout the ’80s and early ’90s. With each book, she displayed her unique talent for combining a lively, comic touch in characterization and plot with a serious concern for such profound themes as the nature of goodness and human freedom. A novelist and philosopher rolled into one, Iris Murdoch declared in her famous essay “Against Dryness” (1961) that literature “has taken over some of the tasks formerly performed by philosophy.” However, she never allowed her novels or her characters to become abstract stand-ins for philosophical viewpoints, asserting in the same essay that the novel should be “a fit house for free characters to live in.”

Producing romances such as The Sandcastle (1957), religious fables such as The Bell (1958), and fantasies such as The Unicorn (1963), she ranged widely across genres and settings. A Severed Head (1961)—later made into both a play and a film—takes on Jungian archetypes and Freud’s theories about masculine sexuality, while in The Red and the Green (1965), Murdoch, in her only foray into historical fiction, delved into the 1916 Easter Rising in Dublin. Her calling cards became the intoxicating combination of love, marriage, adultery, sexuality, and religion, as well as the inventive use of gothic elements. InThe Time of Angels (1966), for instance, the protagonist is an atheist Anglican priest in an impoverished inner-city parish who engages in black magic—and through whom Murdoch explored the central question of the role of morality after the death of God.

From the 1970s into the 1990s, international acclaim and recognition coincided with the publication of some of her finest work, including an experimental novel of love gone mad, The Black Prince (1973), her popular and highly esteemed The Sea, The Sea (1978), and a Platonic investigation of morality, Metaphysics as a Guide to Morals (1992), one of her most acclaimed nonfiction writings. Her last novel, Jackson’s Dilemma (1995), was published just as Alzheimer’s began to take its toll. She died in Oxford on February 8, 1999, survived by her husband, John Bayley.

Learn More About The Sea, the Sea
print

The End of the Affair
Graham Greene

To the Lighthouse
Virginia Woolf

The Broom of the System
David Foster Wallace

Other Voices, Other Rooms
Truman Capote