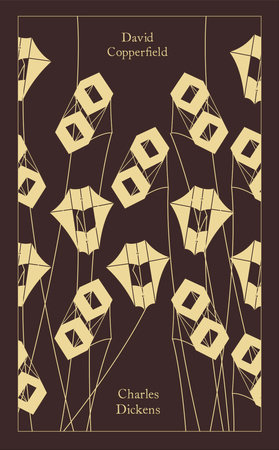 “Even now, famous and caressed and happy, I often forget in my dreams that I have a dear wife and children; even that I am a man; and wander desolately back to that time of my life.”

Charles Dickens composed this passage between 1845 and 1848 referring to the dark times of his youth when his family moved to London in the early 1820s. The imprisonment of his father forced the family to send the twelve-year-old Dickens to work in a blacking factory. This disruption to Dickens’s childhood and education remained a source of intense grief throughout his life. Dickens found these memories too painful to continue his autobiography; in fact, he jealously guarded the facts of his London youth. It was only after his biographer John Forster published his Life of Charles Dickens in 1872 that readers learned of Dickens’s difficult youth and of the autobiographical nature of one of his finest creations, David Copperfield.

Dickens divides the life of Copperfield into two distinct parts, the first recounting the untimely loss of his innocence. In this orphan tale, Copperfield endures the hardships of his mother’s death, a wretched education at Salem House, the toiling at Murdstone and Grinby’s, and a desperate escape to his aunt’s. Made aware of the vicissitudes of life, Copperfield also learns of the cyclical patterns of life as “David Copperfield of Blunderstone” is reborn at his aunt’s as “Copperfield Trotwood”; the barbarous schooling of Mr. Creakle is replaced by the kind instruction of Mr. Wickfield and Dr. Strong; the callous neglect of his stepfather is replaced by the solicitude of his aunt. The practical lesson for Copperfield is to eschew the sternness of Murdstone as well as the carelessness of Micawber, the grandiloquent and improvident father figure who lodges Copperfield.

In the novel’s second part, Copperfield establishes himself first as a legal clerk and parliamentary reporter, and later as a novelist. But his professional matters are of less importance than Copperfield’s two emotional attachments that frame this part of the novel: his relationships with James Steerforth and Dora Spenlow. Both relationships are portrayed as the “mistaken impulses of an undisciplined heart,” and we are meant to second Betsey Trotwood’s comment, “Blind! Blind! Blind!” In retrospect, Copperfield confesses that he “loved Dora to idolatry.” Dora, who resembles Copperfield’s mother in looks and manner, lacks the maturity required to share actively in David’s life or to take up the Victorian burdens of housekeeping. The relationship falters and Copperfield begins to see parallels with the marriage of the aging Dr. Strong and his “child wife” Annie. When the marriage dissolves, Dora dies in labor—quite conveniently, some critics have charged, for her death releases Copperfield of his conjugal obligations. Idolatry also characterizes his relationship with the Byronic James Steerforth, whom Copperfield unwittingly assists in the seduction of young Emily away from her uncle’s care at Yarmouth.

The concluding chapters function as an epilogue to the first two parts. Copperfield, now a famous novelist, takes his sufferings to Europe in a listless journey. He eventually returns to London with renewed vigor to learn of the emigration to Australia of the Micawbers, Peggotty, Emily, and Martha, and of the imprisonment of Steerforth’s servant, Littimer, and Uriah Heep. The novel concludes with Copperfield marrying Agnes.

Throughout the novel, Dickens addresses several important social issues of his time: the problem of prostitution in nineteenth-century London, lack of professional opportunities for women in Victorian England, need for humane treatment for the insane, the injustice of debtors’ prison, and indictments against the rigidly conventional, purse-proud nineteenth-century English middle class. Against these dilemmas, Dickens offers the intuitive wisdom of Mr. Dick, the genuineness of the Micawbers, and, above all, the simple earnestness of Peggotty.

But Copperfield is foremost a novel about memory. Amidst the tumultuous rise and fall of the London cityscape (obsessively cataloged in the novel), Copperfield’s memory preserves the links to his past and brings continuity and coherence to his life while the sudden recollection of the past charges the present with meaning. However, memory also proves to be a source of anguish. Copperfield prefaces the time he spent at Murdstone and Grinby by remarking: “I now approach a period of my life, which I can never lose the remembrance of, while I remember anything; and the recollection of which has often, without my invocation, come before me like a ghost, and haunted happier times.” The act of remembrance, even uninvoked remembrance, dredges up early trauma to experience anew.

Given the intimate connection between the lives of Copperfield and his author, it is little wonder that Dickens considered this book his “favourite child.” And it is little wonder, given its vast array of memorable characters and its brilliant treatment of the quest for self-knowledge, that Copperfield is Dickens’s best loved and most quoted novel. The words of the great English critic G. K. Chesterton perhaps best summarize the experience of reading it: “In this book of David Copperfield, [Dickens] has created creatures who cling to us and tyrannise over us, creatures whom we would not forget if we could, creatures whom we could not forget if we would, creatures who are more actual than the man who made them.”

Charles Dickens was born in Portsmouth on February 7, 1812, the first son of John and Elizabeth Dickens. His family moved often throughout his childhood, living variously in Chatham, Kent and Camden Town, London. In 1824, his father was sent to Marshalsea Debtors’ Prison for three months, and the young Dickens was forced to work six months labeling bottles at Warren’s Blacking warehouse.

Following the completion of his formal education in 1827, Dickens went to work for various London legal firms and became a solicitor’s clerk. At eighteen, Dickens met Maria Beadnell whom he courted unsuccessfully until 1833. The episode left a deep impression on Dickens who subsequently based the character of Dora in David Copperfield and Estella in Great Expectations on Maria. In 1836, Dickens married Catherine Hogarth, daughter of a prominent theater and music critic. That same year he also met John Forster, his literary advisor and future biographer, and began serialization of his first novel The Pickwick Papers. Dickens was hired to edit Bentley’s Miscellany where his novel Oliver Twist was serialized over a period of two years (1837-9). This work as an editor and fiction writer continued throughout the rest of his life. Dickens achieved tangible success in the coming years by publishing Nicholas Nickleby, The Old Curiosity Shop and Barnaby Rudge.

Dickens made his first visit to North America in 1842, a trip he later recorded in American Notes. In December of that year, Dickens published his immortal holiday tale, “A Christmas Carol,” completing the text in a space of two months. The story proved to be an enormous success with the general public, was dramatized and represented the first of many Christmas stories he would write over the years. At the close of the 1840’s Dickens published Dombey and Son and began serialization of his novel, David Copperfield. These novels were followed by Bleak House (1853). From this time onwards, Dickens maintained a furious public reading schedule that proved to be a great popular and financial success.

In the spring of 1859, he initiated a new magazine All the Year Round, which began serialization of A Tale of Two Cities in weekly installments. In the fall of 1860, Dickens, now separated from his wife but with custody of all but one of his children, began work on Great Expectations. His last two novels were Our Mutual Friend (1865) and The Mystery of Edwin Drood, unfinished at his death. In the fall of 1867, Dickens visited the United States again where he gave readings and visited with Longfellow, Emerson, and President Andrew Johnson. The following fall he began, what would prove to be, his farewell reading tour of England. On June 9, 1870, Dickens died of a cerebral hemorrhage, leaving an estate of 93,000 pounds. His wish to be buried “in the small graveyard under Rochester Castle wall” and “in an inexpensive, unostentatious, and strictly private manner” went unheeded, as a tomb in Poets’ Corner of Westminster Abbey was prepared and the entire nation mourned.

Hamlet
Back to Top