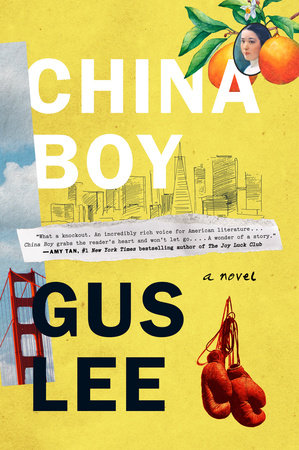 INTRODUCTION
Kai Ting is the only American-born son of an aristocratic Mandarin family that fled China during World War Two to escape invasion and civil war. Growing up in a San Francisco ghetto, Kai is caught between two worlds—embracing neither a Chinese nor an American way of life. After his mother’s death, Kai is suddenly plunged onto the violent streets of his American neighborhood by his new stepmother, a Philadelphia society woman who is determined to erase every vestige of China from the household, even by physical force. This is the story of Kai Ting, torn violently between two worlds, but accepted in neither, and his ultimate fight for the peace in between as he discovers an enemy, a friend, and a set of mentors who have experienced far greater hazards than his own.

Gus Lee is the only American-born member of a Shanghai family. He grew up in San Francisco and attended West Point for three years until his failing performance in then-mandatory electrical engineering gave him the involuntary opportunity to become an enlisted man. After receiving his law degree from the University of California at Davis, he rejoined the army as Captain Lee and served as general counsel. He resumed civilian life to become a deputy district attorney in Sacramento, then served for some years as Director of Attorney Education for the State Bar of California. He is married and lives with his wife and two children in Colorado Springs. China Boy is his first novel.

From the author bio and the acknowledgments in this book, it is apparent that your life, at least superficially, is similar to Kai’s. How much of this novel is autobiographical? Where did you draw the line between novel and memoir?

The book began as a journal for Jena, our seven-year old daughter and for Eric, our five-year old son. Jena had asked me about her missing grandmother&151;my mah-mee—and when I told her that I remembered nothing about her, I suddenly saw the moral need to learn and then tell her story to our children. I researched her story with my family. When I reached the point in the journal in which our mother died, I could have stopped writing. But I wanted my kids to know what it was like for me when I was their age and to understand that they came from a former culture, so I kept writing. I had no idea it would become a book. I just hoped our kids would be willing to read it someday!

When Diane, my spouse, urged me to submit the completed journal for possible publication, I changed our family name and altered material family facts in the manuscript to avoid offending my father.

All the characters in the story are real, from Sippy Suds (real name unknown) to Angelina in the Y cafeteria (real name, Lola.) Uncle Shim was Uncle Shen. My sisters are Elinor (also, Lily), Ying and Mary (also Ming) instead of Jennifer, Megan and Janie. Tony, Pinoy and Bobby Lewis were my real instructors. The Y was my true home. The most fictional element is Chapter 24, Wood, which I added upon my editor’s suggestion. The events in that chapter never occurred.

What influenced your decision to make Kai’s attempt at assimilation so violent? Do you think it possible for the teachings of Chinese culture to reconcile with the violence of American culture?

I decided to tell the truth, and the truth is that violence is universal, human and thus far, inescapable. Will and Ariel Durant have written that humans will be violent as long as we disagree with each other in our homes, schools and workplaces. Individuals struggle to avoid competition, jealousy and anger; how much more difficult it is for nations to act in a harmonious manner.

The particular irony is that my family had fled a land and a continent torn by violence. They were refugees from the chaos of the Chinese Revolution, which began in 1911; the horror of the Japanese invasion, which began in 1931; and the violence of banditry and warlordism, which had begun in earnest by 1912. It is estimated that these conflicts took upwards of 15 million civilian deaths and perhaps 4 million military fatalities. My great-grandparents were refugees from the Taiping Rebellion, and my ancestors before that had undergone peasant revolts and centuries of conquests by Manchus, Mongols and Muslims.

By the time my parents arrived in America, a good portion of their age peers had been violently killed, murdered, executed or slaughtered while the vast majority of Chinese in America of that period survived. My mother and sisters bathed in the peacefulness of America. There were no bombings, no invasions, no bandits, no savaging of women, no abandonment of baby girls (boys were saved whenever possible), no totalitarian government and no bloody impressments of roped-together-farm boys for military, warlord service or factory slave work. My sisters could choose their own husbands. They could receive an excellent education. They could vote. They couldn’t be sold and their daughters would be safe from abandonment or sale to cruel men in hard times.

My sisters walked to school and went to college without physical fear. I, on the other hand, got the snookers beat out of me by kids who struggled to believe that such a cowardly, sniveling, weeping, blind and physically inept kid could actually exist in the world. They kept testing me to make the boy in me come out. But it wasn’t America that was violent – it was poverty. Had I been born into poor streets in Hong Kong, Canton or Shanghai, (or Mexico City, Paris, Frankfurt, Palermo, Rio or Moscow) I would’ve been set upon by tougher street gangs and, given my vast physical gifts, probably killed.

I thought America was horribly violent. The adults in my family – who were actually responsible for the worst violence that I experienced as a kid – knew better. The truth was that my father and stepmother were violent people and cast me into the street without preparing me.

Millions of Chinese immigrants, and their children, are trying to do this as we speak. I admire Kong Fu-tzu, Confucius, but I wouldn’t want to live in a Confucian society. I, as a male, would have enormous rights, but my spouse and daughter would not. I lived in Confucian East Asia for more than a year. It was difficult for me to eat with my male host while his wife and children sat, watched and served us; they would not until the men were finished. Sons got the best food, clothing and education. Daughters were taught to be obedient and silent. There was a great deal of corporal punishment for slight disappointments and dire consequences for disobedience. Confucian men can abandon their wives and children at whim, without shame.

I admire Washington and Lincoln, while living in witness to the gaps between the dream of America and those who cannot fully participate.

Ultimately, Chinese Confucian culture (which is 2500 years older than 50-year old Chinese Communism), is about male hegemony and family authority. My mah-mee detested that central aspect of Chinese culture, and fled it. Yet she never stopped mourning for the separation from her kind and gentle father.

Ultimately, I think, American culture is not about violence (Cao Cao, the Han and Tang emperors, Genghiz Khan, Hung Chiu-chuan, Li Hung-chang, Tseng Kuo-fan, Mao Zedong, Chiang Kai-shek and the Chinese warlords were famous for the slaughtering of their enemies and were far more violent than our worst military and political leaders). It’s about freedom and choice. The challenge for Chinese culture is finding freedom. The challenge for American culture is finding responsibility.

I like to think that these two notions have merged quite wonderfully in our children.

This novel ends while Kai is still a boy and, although he has had a victory on the street, he still has a long way toward assimilation. Do you plan to continue Kai’s story in future novels?

Honor and Duty (Knopf 1994) follows Kai to West Point. Tiger’s Tail (Knopf 1996) follows a Chinese-American army officer to the DMZ in Korea. No Physical Evidence (Ballantine 1998) describes the struggles of a California Chinese-American deputy district attorney in the most difficult trial of his life. Chasing Hepburn (Harmony 2002) is the real-life memoir of the Lee family, which was related to me by my 91-year old father before he passed away. The novels tell my story while the memoir focuses on the lives of my parents.

I’m considering a flashback, non-fictional retelling of China Boy. This is because Diane and I have taken guardianship of an at-risk 15-year old lad from a Korean immigrant family, and his struggles are haunting reminders of my own. I’m now seeking to be Coach Tony to him, but instead of visiting Tony in his hotel room, our long-neglected, underfed, uncared-for lad is living with us.

To Kill a Mockingbird was required reading in my first year at West Point. Harper Lee then came to the Academy to speak to us. Her appearance and her talk were inspirational, magical and chimerical. Inspirational because she wrote of moral courage possessed by the most common of people – the social subgroup with which I identified. Magical because she transformed a thousand hard-bitten and fatigued West Point Plebes into a group of young readers who suddenly loved novels with renewed depth and passion. Chimerical because her presence that night in 1965 changed something organic inside of me, preparing me for my own writing, many years later.

I just finished a non-fiction book on Courage. One of the wonderful things I can do is to speak and train and even seek to educate as an ethicist. Despite my early embrace of cowardice, I’m now an advocate for moral courage and the development of character. American business isn’t intentionally adept at either, and this can be traced to the dramatic absence of the teaching of applied ethics in our colleges, universities, graduate and professional schools. We desperately require moral competence in our relationships, decision-making and family and institutional lives, which have increasingly become Hobbesian rather than Aristotelian or Mosaic.

My publisher said this is a major switch for me. In truth, I’ve been a practicing and struggling ethicist for more than twenty-five years, while I’ve only been a writer for sixteen. It was great fun to write this book, which provides guidelines for the behaviors of courage through the stories of courageous people I’ve known and worked with. Courage is an extension of China Boy and my other books, in which I tried to tell stories of people who boldly act for the right regardless of risk to self.

Under the Feet of Jesus
Helena Maria Viramontes

Running in the Family
Michael Ondaatje

Home
Toni Morrison
Back to Top