The House of Mondavi Reader’s Guide 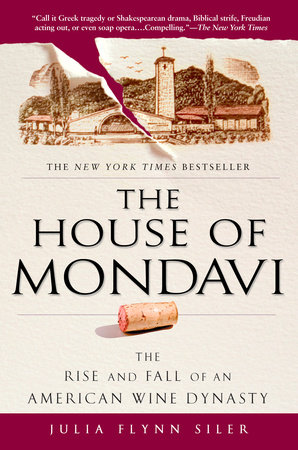 The House of Mondavi Reader’s Guide

INTRODUCTION
Set in California’s lush Napa Valley and spanning four generations of a talented and visionary family, The House of Mondaviis a tale of genius, sibling rivalry, and betrayal. From 1906, when Italian immigrant Cesare Mondavi passed through Ellis Island, to the Robert Mondavi Corp.’s twenty-first-century battle over a billion-dollar fortune, award-winning journalist Julia Flynn Siler brings to life both the place and the people in this riveting family drama.

The blood feuds are as spectacular as the business triumphs. Cesare’s sons, Robert and Peter, literally came to blows in the 1960s during a dispute touched off by the purchase of a mink coat, resulting in Robert’s exile from the family—and his subsequent founding of a winery that would set off a revolution in American winemaking. Robert’s sons, Michael and Timothy, as passionate in their own ways as their visionary father, waged battle with each other for control of the company before Michael’s expansive ambitions ultimately led to a board coup and the sale of the business to an international conglomerate.

A meticulously reported narrative based on thousands of hours of interviews, The House of Mondavi is bound to become a classic.

ABOUT JULIA FLYNN SILER
San Francisco-based Julia Flynn Siler writes for The Wall Street Journal. She is a former foreign correspondent for Business Week and The Wall Street Journal, based out of London, and wrote for The New York Times from Chicago. She earned an MBA from the Kellogg Graduate School of Management, a master’s degree from Columbia’s Graduate School of Journalism, and an undergraduate degree from Brown University. She lives in Northern California with her husband and their two sons.

Does your Reading Group enjoy sipping wine as much as discussing books?

Would your Wine Tasting Club enjoy a conversation about the rise and fall of the empire founded by America’s first family of wine?

If so, consider organizing a tasting of some of wines featured in The House of Mondavi as part of your event. You can discuss the colorful personalities in the book while sampling their wines.

Groups that select The House of Mondavi can also have the author join the conversation by speakerphone on the night they discuss the book. Depending on her availability, she may even be able to join them in person.

Just fill out the chat request phone and, at the scheduled time, Julia will phone your group and you’ll have an hour to ask questions such as: What surprising news led her to write the book? What forced the Mondavi family to give up control of the company they founded? What are her favorite wines? What was it like spending three years exploring Napa Valley as part of her research?

Meanwhile, here are some ideas for wine selections to accompany your event at every price level:* Enjoy!

Robert Mondavi Private Selection, $9 to $13 a bottle.
This is the midpriced wine that winemaker Timothy Mondavi, Robert’s younger son, objected to so strongly and over which he ended up taking a sabbatical.

Robert Mondavi Fumé Blanc, $10 to $65 a bottle.
This is a name Robert Mondavi came up with in the 1960s to make wine produced from everyday Sauvignon Blanc grapes sound more European.

Robert Mondavi Reserve, $14 to $125 a bottle.
Look for a vineyard designation for the famed To Kalon, where Robert’s first wife, Marjorie’s, ashes were scattered.

Opus One, $50 to $175 a bottle.
This is the red wine produced by a joint venture formed by France’s Baron Philippe de Rothschild and Robert Mondavi.

Stags’ Leap Wine Cellars, $18 to $150 a bottle.
This is the winery that Mondavi’s first winemaker, Warren Winiarski, founded after leaving the Robert Mondavi Winery. His Cabernet Sauvignon won the 1976 Paris Tasting. Cask 23 is his highest-end wine.

Grgich Hills, $8 to $85 a bottle.
Miljenko “Mike” Grgich was also one of Mondavi’s early winemakers. He went on to win the famous 1976 Paris Tasting for the Chardonnay he made for Napa’s Chateau Montelena.

Luce Della Vite, $25 to $75 a bottle.
This is the first wine to be produced by Tuscany’s Frescobaldis, a wine dynasty that can trace its history back seven hundred years, and the Mondavis. The Frescobaldis bought out the Robert Mondavi Corp’s 50 percent stake and then sold it to Michael Mondavi.

Sena, $12 to $70 a bottle.
This is the red wine first produced by a joint venture between Chile’s Chadwick family and Robert Mondavi. The winery is now owned solely by the Chadwicks.

Charles Shaw, $3 to $5 a bottle.
Better known by its nickname, “Two Buck Chuck,” this is the wine made by Fred Franzia, the wine industry’s most colorful renegade and a longtime friend of Michael Mondavi’s, sold only at Trader Joe’s.

I’M, $13 a bottle.
A rosé produced by the Michael Mondavi family following the sale of the Robert Mondavi Corp. The I stands for Isabel, Michael’s wife, and the M stands for Mondavi. Pronounced “I’m.”

*These are release prices as reported by Wine Spectator. Retail price will vary according to location. Check with your local wine merchant for vintage recommendations. Pre-ordering the wines is suggested to help you get the selection you’d like.

Learn More About The House of Mondavi
print

The Road to Burgundy

The Wet and the Dry

I Hear She’s a Real Bitch

Russ & Daughters
Back to Top