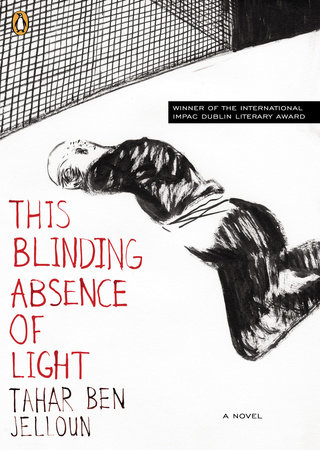 INTRODUCTION
Like many books that bear witness to human cruelty, Tahar Ben Jelloun’s This Blinding Absence of Light is propelled by a simple, powerful narrative. Its spare tone and lean style are reminiscent of other great books of life under totalitarianism. (Elie Wiesel’s Night and Alexander Solzhenitsyn’s memoir The Gulag Archipelago spring immediately to mind.) Ben Jelloun’s book is in many ways all the more affecting in that it deals with evil of smaller scale than these works, but its message is similar: that autocratic government institutions act without mercy.

The book is not without ambiguity. Though the protagonist/narrator is jailed for his role in a revolutionary coup attempt in 1971, few readers would sympathize with the revolutionaries in question: The “revolt against the state” that the narrator has participated in may to some resemble little more than the massacre of attendants at a royal birthday celebration.

Whatever the narrator’s guilt or the merits of his cause, his arrest condemns him to twenty years in a subterranean jail cell too small to stand up in. There the protagonist is subject to horrific tortures. But just as challenging over time is the unchanging purgatory of prison life: the same stale bread and weak coffee, the same complaints from the inmate in the next cell, the same memories of laughter and sunlight before his incarceration. Self-control is the narrator’s defense. “If it is the child within us who awakens when we are afraid,” he tells us, “here it was the wise man and the lunatic in me who revealed themselves as ardent opponents, each striving to take me the farthest from myself.”

This thought sustains him as he endures each new cruelty and indignity. By denying himself and controlling his thoughts, he remains relatively healthy and sane. His compatriots do not adapt so successfully: one dies trying to relieve his constipation, another tries to commit a gruesome suicide in a grave of quicklime, while two prisoners are devoured by roaches (one from the inside out, the other from the outside in).

And yet the success of the protagonist is not a tale of monkish self-mastery à la Nelson Mandela. The narrator’s every magical thought, intellectual rationalization, and appeal to God eventually fail him. And as the narrator tells his own story through memory, his story becomes more and more complex and unclear. He understandably resents his father for abandoning his family for a life of royal brownnosing, but it is clear that the narrator joined the coup in part from a fascination with the image of gunning down his father. Likewise, the protagonist’s relationship with his mother changes as the book progresses, from a strong binding tie between family members into an almost incestuous obsession. Ben Jelloun does not allow us to rest with a simple view of “the suffering hero” who stoically bears all adversity due to the purity and righteousness of his cause. Such a luxury, he seems to be telling us, is out of place if we want to understand the world as it is.

And that, in the end, touches on an important message of the book: Morocco’s postcolonial society is still dominated by dysfunction, from its elites to its revolutionaries; the colonized do not instantly recover once the colonizer leaves. That the narrator is saved not by his fellow citizens but a European-based Human Rights campaign adds a further twist to the portrait of a Morocco that has not yet escaped the turmoil of its past. That we respect the narrator’s suffering regardless of his political leanings is Ben Jelloun’s humane rejoinder to those who suggest easy solutions to the realities of postcolonial life.

Tahar Ben Jelloun was born in the Moroccan city of Fes in 1944, a city still closely connected with its history as one of North Africa’s preeminent Islamic cities. Ancient hamlets within the city are still protected by Troy-like defensive walls, and the city is dotted with some of the oldest mosques in Africa. Fes was the center of multiple kingdoms in the past millennium, but in the twentieth century, Morocco came under French control, and the French moved the capital from Fes to Rabat. Like many African countries, it emerged from colonial rule in the 1950s, becoming an independent yet authoritarian monarchy. “Independent but not free” describes the Morocco of This Blinding Absence of Light.

Young Ben Jelloun followed his fortunes away from archaic Fes to the modern independent capital of Rabat where he found his voice, publishing his first collection of poems, Hommes sous linceul de silence, in 1971. Notably, it was a work in French—as the bulk of Ben Jelloun’s subsequent work would be—though Ben Jelloun’s native tongue is Arabic. Critical arguments have been made for and against his linguistic decision, but one point is undeniable: Ben Jelloun would never have become one of the preeminent literary voices of North Africa if he had written purely in Arabic. French was a window to Europe, and from there to the world.

In 1971 that Ben Jelloun moved to France, where he earned a Ph.D. in social work. His studies opened a new literary avenue, the retelling of stories told to him. Ben Jelloun turned the plight of some of his patients into his second novel, La Reclusion solitaire. In 1987, the sequel to that book, titled La Nuit sacree won the Prix Goncourt, France’s most prestigious prize for literature. This Blinding Absence of Light (originally titled Cette aveuglante absence de lumière) takes this writing style and sharpens its political edge: based on the testimony of an inmate from Tazmamart prison, This Blinding Absence of Light is an explicit call to arms for Morocco’s civil society. In 2004, Linda Coverdale’s translation of the book won Ireland’s International IMPAC Dublin Literary Award.