This Book Will Save Your Life Reader’s Guide 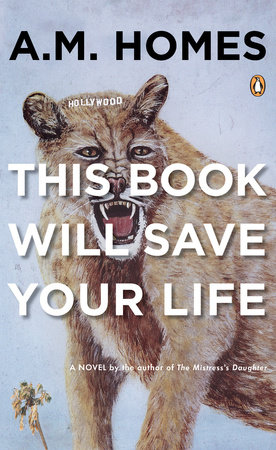 This Book Will Save Your Life Reader’s Guide

print
This Book Will Save Your Life Reader’s Guide

INTRODUCTION
Home to Hollywood and Disneyland, Los Angeles may just be the American epitome of the controlled environment: man-made, manicured, synthetic. If the Great American Novel tends to tell of the outsider looking for and grasping at the American Dream, A.M. Homes’s This Book Will Save Your Life inverts such tales in a droll, satirical adventure of personal redemption that turns on the absurd.

Fittingly, when we first meet our protagonist, the fifty-five-year-old Richard Novak, he stands very much on the inside looking out—literally, through the glass window of his perfectly ordered, de Kooning–decorated house on a hill. “These are the things he wanted: controlled, precise, ordered.” An affluent online stock trader, Novak is a self-isolated machine kept in tune by a nutritionist, personal trainer, and housekeeper, his primary social contacts.

It takes an intense attack of engulfing pain—and a brief hospital visit where diagnosis is elusive—for him to discover his self-made exile. “He’d so thoroughly removed himself from the world of dependencies and obligations,” Homes writes, “he wasn’t sure he still existed.” He’s bewildered when a nurse asks if he has a friend he can contact, eventually calling his ex-wife, who, as always, is too busy to talk to him, hospital or no hospital.

Breaking his routine and his nutritionist’s regime, Novak’s first stop upon release is a donut shop whose immigrant purveyor, Anhil, counts his donuts like blessings. Listening to Anhil expound on the perpetual dissatisfaction of Americans always on the go, Novak finally takes the time to smell the coffee.

As he grapples with the haphazard foundations of his personal life, a sinkhole grows ever larger on his lawn, threatening his home and spurring him into action. When a horse ends up mired in the sinkhole, he is quick to act, staging a rescue operation via helicopter, replete with a movie-star neighbor playing the lead. Novak’s heroics persist when he befriends a crying housewife who can’t cope with her thankless family, when he helps free a hostage in a car trunk, and when he saves a drunk from a suicidal swim at a beachside powwow. “I’m trying to be someone new,” he tells Cynthia, the housewife-cum-friend who is also overhauling her own life.

Novak removes his “noise-canceling earphones” that have kept the world at bay, committed to becoming a new man and to interacting with life and whatever it may bring. After unprecedented bouts of crying, his suppressed memories return, of his childhood, of the demise of his marriage to a workaholic wife, of his repeated failures toward his son. As Richard slowly rebuilds his familial connections, and his awakening emotional availability leads to new ones, Los Angeles also seems to be experiencing a metamorphosis, albeit of a different sort, with earthquakes, spontaneous wildfires, sightings of a “saber-toothed cat,” fire ant infestations, and attacking Chihuahuas. This “return of the repressed” sweeps both Richard’s inner and outer worlds into a comedic trajectory brimming with preposterous incidents and quirky characters whose insights and struggles help him regain his perspective and his humanity—and quite possibly save his life.

ABOUT A. M. HOMES

A. M. Homes is the author of Things You Should Know, Music for Torching, The End of Alice, In a Country of Mothers, The Safety of Objects, and Jack, and Los Angeles: People, Places and the Castle on the Hill. Recipient of Guggenheim and NEA Fellowships, she is a Vanity Fair contributing editor and publishes inThe New Yorker, Granta, Harper’s, McSweeney’s, Artforum, and The New York Times.

A CONVERSATION WITH A. M. HOMES
What inspired you to create Richard Novak?

I was interested in writing about someone who on the surface has it all but below that really has very little. I wanted to see if I could create a character who could come back to life, pull himself together, and become a force for good, not just in his own life but in the lives of those he touches. I’ve become very aware that this is it—the one life we get—and the importance of making it a good life, one in which we take responsibility not just for ourselves but also for those around us. Every man for himself is a greedy, self-absorbed concept (very twentieth-century). We need to get back to what are in some ways more primitive, more successful concepts of family, which include the extended family and a commitment to one’s role and place in their surrounding community.

How is what you’re trying to say in this novel similar or different from your other books?

Each book really is part of an ongoing organic evolution, an extension of my work. I’ve always been interested in ideas about our culture, the morality underneath the way we live: Do we think we are good people, doing the “right” thing? I’ve been interested in the ongoing and endless struggle between a person’s public persona and who they are at home, the idea that we can’t be in public who we are in private. So many of us work to project a kind of streamlined personality with no edges, and yet we all have edges or idiosyncratic ways of thinking and doing things. In every book and story one sees that I am interested in both embracing the traditional—in terms of story form and narrative—and also challenging readers, prompting them, I hope, to think about their lives and how we live and function as a culture. My ideas, shocking though they apparently seem to some, really just come right out of the newspapers. I read culture, how we live, what we do, and perhaps think ahead to where we are going. I am also deeply aware of where we have been and the importance of keeping that in mind when thinking about human behavior. More and more I am interested in history, in writing which weaves history and fiction together.

I’ve always written about families—couples and marriage—and the ways we fail ourselves and each other. And in this new novel, I’m at it once again. Despite how fractured these families may seem, I do believe strongly in family and marriage and very much want to see people learning to communicate and be more successful in their relationships. All relationships are hard work, even “just” owning a dog.

I am truly a writer of fiction, working from my imagination, making up events and characters. At the same time, perhaps more than other books I’ve written, This Book Will Save Your Life is philosophically very much in line with what I try to put forward in my own life. A confession: I am that person who talks to strangers in elevators, who stops crying people on the street and asks if they’re OK, who offers to help an old person home with their groceries. And I find that my offer of help is equally as often accepted as it is rejected.

It is also important to me to write books that are funny—darkly funny. I find daily life to be surrealistic. The split between what we’re able to accomplish in mechanical terms combined with human behavior and a kind of flawed social structure—e.g., an automated voice versus a “live” person, and so on—all tells me a lot about who we (Americans) are as people and who we are becoming. And despite being perpetually hopeful about what we are each capable of, I remain often stunned by what I see.

You are a writer living in New York. What is it about Los Angeles that attracts you to it as a setting for fiction?

I spent a lot of time in Los Angeles, getting to know the city and the people who live there. I knew I wanted to write a book set in L.A., in part because the geography is so dramatic, so otherworldly and in complete contrast to how people describe it. Everyone says they love L.A. because of the weather. But honestly the weather is very strange: they have fires, floods, mudslides, tar pits, and earthquakes, and yet people seem to think the weather is good. Yes, things bloom year-round and the sun comes out more days than not, but there is also a strangeness to the earth there. The land gives in—shifting, erupting, or exploding without warning. L.A. is also a place where the American dream thrives; people flock to L.A. from all over the world to “make it,” to find themselves. The city is the last of the Wild West, tolerating individuality, eccentricity. There are enormously diverse cultures in L.A., but you have to dig into the city in order to find them.

In direct contrast to New York City, where I live, there is very little street life in L.A. It really is a car culture and a culture that one can become very isolated in. In New York, there are a million people on the street, bearing witness that there is someone sharing your experience and you’re never alone. In L.A., you have to work hard to build a community. That interested me and seemed a fitting place for Richard Novak to go after he left his marriage. He fractured off to L.A. and really never came back—until now.

Since finishing the novel, I’ve been working on a memoir, The Mistress’s Daughter, a portion of which appeared in The New Yorker in December 2004. It’s the story of my biological parents, who gave me up for adoption and then came looking for me when I was in my early thirties. It is in part a story of what it means to be adopted, but it is also about identity, how all of us—not just adoptees—define and construct our sense of self and our family.

Your novel’s title will surely draw in readers. How did you come up with the title? In what ways do you hope the novel will change people’s lives? Or might it be a wry commentary on self-help books? A nod to the nihilistic funnymen of Britain’s Benrik series (“This Book Will Change Your Life”)? All of the above? None of the above?

Often I have a title before I start to work—but this time, I wasn’t sure. I finished the novel and gave it to my agent who said, I love it, what’s it called. And I blurted out, “This Book Will Save Your Life,” which I hope holds true. It saved Richard Novak’s life—he is far happier and more fulfilled at the end.

Learn More About This Book Will Save Your Life
print

The Knockout Queen
Back to Top