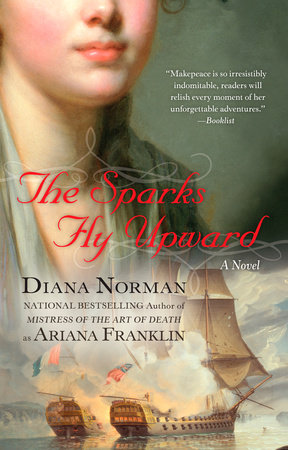 “Drama, passion, intrigue… I loved it and didn’t want it to end ever.”
–Sunday Times (London)

“[Norman] captures the feel of the period with wit, verve and emotion.”
–Woman’s Own

A new novel of love and courage in a time of war, from the author of A Catch of Consequence and Taking Liberties.

Few of those Philippa loves in London return her affection. Not the love of her life, who has a new bride. Not even her widowed mother, Makepeace Burke. So Philippa decides on a marriage of convenience to a prudish, if kind, man.

Across the Channel in France, the Reign of Terror is causing the beheading of thousands from the French nobility. Among those in danger is Philippa’s friend, the Marquis de Condorcet. Not only has Philippa the means of rescuing him from the guillotine, she’s got the courage. And as fate would have it, Philippa will find love where she least expects it–while staring death in the face.

Having worked on local newspapers in Devon and the East End of London, Diana Norman became, at age twenty, the youngest reporter on London’s Fleet Street. Now the author of biographies and historical novels,The Sparks Fly Upward is her third novel following the loves and adventures of Makepeace Burke and her family in the heady revolutionary days of the late 1700s. Diana Norman lives in Hertfordshire, England, with her husband, film critic Barry Norman, and together they have two daughters.

Absolute Truths
Back to Top