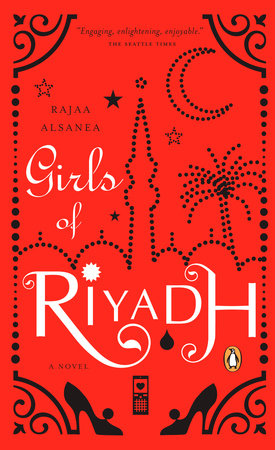 Through a series of emails on a Yahoo subscription list, an unnamed narrator relates the adventures of her four young friends as they confront the challenges of adult life in the privileged society of Riyadh, Saudi Arabia. While the urbane clique shares fashion tips, the occasional sip of champagne, and a dream of true love, each of the girls has her own individual story: Gamrah has moved to the United States with her new husband in a union their families have arranged. Lonely and confined to a Chicago apartment, she wonders if she made the right choice. Her best friend, the romantic business student Sadeem, is fixed up with Waleed, a handsome civil servant from a prominent lineage, and they are soon caught up in a romantic whirlwind that might be a bit too intoxicating for their own good. Michelle, the half-American member of the group, is at the mall when she meets her own seemingly perfect paramour—the one man who can truly understand her Western values—but who, unfortunately, comes from a less tolerant family. Rebellious, headstrong medical student Lamees finds herself attracted to the brother of a Shiite classmate, even though the relationship may jeopardize her friendships and her freedom.

What Gamrah, Sadeem, Michelle, and Lamees soon learn is that falling in love might be easy, but finding lasting romance in Riyadh is a much more difficult proposition. As sophisticated as they are, they, like all Saudi women, must contend with their culture’s conflicting attitudes about sexuality and its deeply rooted class and religious prejudices—social pressures that can doom even the most auspicious-seeming match. Nothing seems to turn out exactly as they planned, but as the girls of Riyadh struggle to maintain their moral integrity in a modern world, they learn to find happiness on their own terms.

Originally published in Arabic in Lebanon in 2005 and now translated into English for the first time, Alsanea’s debut novel exposes the private world of Saudi Arabia’s most cloistered citizens to uncover young women who ultimately share the same hopes and dreams as their Western counterparts. Her honest portrayal of controversial subject matter made Alsanea a literary sensation and a public enemy, sparking fierce debate in the media and online discussion groups. Addictively readable yet deeply political, Girls of Riyadh has been called the first modern Arab novel and its comic but poignant accounts of contemporary Saudi life make it an instant classic.

Rajaa Alsanea grew up in Riyadh, the younger of two daughters in a family of doctors and dentists. She is currently living in Chicago, where she is pursuing a degree in endodontics. She intends to return to Saudi Arabia after obtaining her degree. She is twenty-five years old.

A CONVERSATION WITH RAJAA ALSANEA

Q. You have structured Girls of Riyadh as a modern epistolary novel, a series of emails from an unidentified narrator. What inspired you to tell the story in this manner?

I used Internet as a vehicle in my novel to portray the impact of modern communication tools on the Saudi society in the past ten years. In the conservative Saudi society, the Internet, cell phones, and Bluetooth can be as important, if not more crucial, than face-to-face communication. The narrator in Girls of Riyadh is a well enlightened twenty-first century young woman who lives in Saudi. She is smart, motivated, and knows exactly what she and her friends are missing, but yet not strong enough to face the whole society by exposing her true identity.

Q. The narrator responds to hate mail and protests from readers that find her subject matter offensive. It’s almost as if you were predicting the response to your book. Could you have anticipated the amount of attention the book has received?

When I wrote the story I didn’t want the fear of being judged or criticized to affect the plot. Therefore, I was very involved and occupied by the writing process. What took over was the style or the general theme, how characters would react to each other and where the story should go. I knew that if one had sent such emails in real life that would be the predictable response of the Saudi society. However, I did not anticipate that my book would spread as fast as mass emails would. I had my first interview with a Saudi newspaper just the day after my book was released in Lebanon. It seemed like my book was something that Saudis have been longing for, but were never ready to put into action.

Q. In its original form, the novel was written in a mixture of classical and modern Arabic dialects, but these subtleties are lost in the English version. What, if anything, would an English-speaking reader miss in this translation?

At first I was hesitant to translate my book to any other language because of the importance of the different dialects, levels, techniques used in it. But as a girl who grew up reading translated novels from all around the world I thought I owe it to book lovers everywhere to translate my book. Arabic is a very literary language and translating Arabic books to other languages is usually less successful than translating books written in other languages into Arabic. The fact that the majority of Arab critics considered the way I have written my book a breakthrough in Arabic literature made me believe that even if parts of the book were lost in translation, it will still be good enough in other languages. I am glad I made that decision because there aren’t many Arabic novels translated to other languages and this is part of why people know so little about us.

Q. The scene where Lamees, Michelle, Gamrah, and Sadeem dress in abayas and drive around the city in a rented car seems especially bold. Is this a common practice for young Saudi women looking to get around the laws that prohibit them from driving?

To some extent; when there are rules there are ways to get around them. And in Saudi there are numerous laws, both religious and social. The majority of Saudis adhere to religious laws like praying, fasting, not drinking, etc. But when it comes to social laws like females not driving or men and women not falling in innocent love, the young generation is starting to question and refuse such time honored laws.

Q. What are some of your literary influences? How do you classify Girls of Riyadh in terms of genre?

I am happy that I created my own genre with this book and hope to keep it this way for the coming books. I grew up reading Hemingway, Mum, and Hugo. My favorite author is Ghazi Al-Gusaibi, author of the Freedom Flat and many other books that are not in English yet, unfortunately.

Q. This book offers a vivid portrait of modern life in Saudi Arabia, one that Westerners don’t often get. Now that the book is in translation, what are you hoping to communicate to Western audiences? Are there any myths or misconceptions you are trying to dispel?

We are victims of stereotyping. There is an Arabic proverb that says, “One is the enemy of what he does not know.” I did not write the book for Western readers. This is why it is very authentic and genuine even after translation. My Western audiences will look at Saudi through a keyhole and they will be able to connect with those who live at a totally different society, and yet have the same dreams, emotions, and goals.

Q. Two of your characters, Sadeem and Michelle, find themselves caught between cultures, unable to feel entirely at home either in Riyadh or in Europe or the States. Now that you have lived in America, what has been your own experience? Is there always a sense of losing touch with home or has the exposure to Western culture strengthened your Saudi identity?

I think that living within any culture makes you scrutinize its positive and negative aspects. Growing up in Saudi I was fascinated by what I see of the American society on TV and living here in the U.S. made me appreciate my homeland more. Both societies have taught me a lot and just like the Girls of Riyadh I am trying to find my own terms and create my own environment for myself; an environment that treasures religion and family and rejects unnecessary social or racial traditions.

Q. Your narrator says that “Our Saudi society resembles a fruit cocktail of social classes in which no class mixes with another unless absolutely necessary and even then only with the help of a blender!” Indeed, some of your characters find their chances at love thwarted by class divisions. In your experience, are class mores more restrictive than gender roles in Saudi Arabia?

Class is more restrictive than gender especially nowadays. Maybe fifty years ago men were privileged much more than women and so they were not under any sort of restrictions. Now, equality between genders is happening slowly, and both are victims of the social restrictions of class, tribe, and religious views.

Q. In the novel the Valentine’s Day holiday is officially prohibited but celebrated on the sly, Gamrah covertly gets a rhinoplasty, and Lamees gets caught smuggling American videotapes in school—all infractions that would seem tame to a Western audience but which, it could be argued, have the potential to erode traditional Saudi culture. How do you distinguish cultural exchange from destructive influence?

Personally, I would say that we need to allow cultural exchange to freely express before we are able to decide what is destructive and what is beneficial. Censorship is a myth and it does not protect the society from outer governments. We realized now as Saudis that there are encouraging cultural exchange through scholarships to other countries, media, and the Internet. The society is opening up to other cultures and learning to respect different views and King Abdullah plays a big role in that.

Q. All of your characters are intent on finding “true love.” How has does this idea clash with the ideals of their society? Do you think there’s a way the two things can ever be reconciled?

True love is hard to find everywhere. On top of that, many of the true love stories cannot survive under social pressure. There is no ideal situation in love and unless the society and families are less idealistic, love will not be able to thrive easily in our land. When Saudi was only deserts and farms, people were falling in love and living a much easier life than we are nowadays. It is surprising how idealism can not just restrict us from moving forward, but can pull us backwards too.

In the Language of Miracles
Rajia Hassib

A Strangeness in My Mind
Orhan Pamuk

How to Get Filthy Rich in Rising Asia
Mohsin Hamid

The Museum of Innocence
Orhan Pamuk

Birds Without Wings
Louis de Bernieres
Back to Top