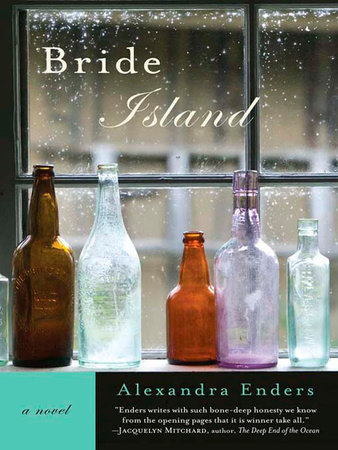 Six years ago, Polly Birdswell—drinking and deeply unhappy—made a decision that changed her life forever. Believing she could spare her young daughter a legacy of self-destruction, she left her husband and child and moved north to a coastal town in Maine. There, close to Bride Island, the beloved family retreat she considers her true home, she set about getting sober and rebuilding her life.

Now Polly desperately wants seven-old Monroe back, and is determined to prove—to herself especially—that she’s a stable and loving mother. But can she move forward when her family and friends won’t let her forget the past? As Polly tries to claim ownership of what she loves, and discovers that some things can never truly be owned, she must again ask herself what she’s willing to relinquish.

Alexandra Enders has published short stories in BOMB magazine, Hunger Mountain, and Critical Quarterly, and was a finalist for the Rolex Mentor and Protégé Arts Initiative with Toni Morrison. She has an MFA in fiction from Vermont College, and has written articles for Martha Stuart Living, Elle, Food & Wine, and Art & Antiques. She lives in New York and Maine with her husband and daughter. This is her first novel.

A CONVERSATION WITH ALEXANDRA ENDERS

Q. Do you have an island like Bride Island in your life?

A. No, but I’ve always been fascinated by islands, both as geographical entity and as metaphor. The area of Maine I’m writing about, the Penobscot Bay, is rich with small and large islands, many of which had thriving communities in the nineteenth century. One summer I was invited by friends to stay on the small island they visited every year. We took the mail boat out and though we were there only about a day and a half, everything about the experience enchanted me—the remoteness, the lack of electricity, the very basic weather-beaten house with its old furnishings and blue-and-white china. It seemed a setting ripe with possibility.

Q. What was your inspiration for the Birdswell Family?

A. Polly and Monroe came to me first as an image of a woman and child sitting in a car. They became part of a story I was writing called “Places and Things,” a terrible title but I was interested in someone who felt she could care for land and fix things but could not be a good mother to her child. My own daughter was about five at the time and I was in graduate school, trying to figure out how to be a good mother, how to give my daughter the kind of attention and time I wanted to give her, and how to be a serious writer, which also demanded a huge commitment and passion. It wasn’t that the two occupations were in conflict, but more that they shared a similar energy and each was greedy. Then too, I adored my daughter so much and wondered why anyone would leave a child. Because I’m the kind of writer who likes to answer questions that frighten me, or that I don’t understand, I tried to figure it out. As I pursued the question of Polly’s leaving Monroe, I realized that it wasn’t just a short story, but a novel, and that Polly’s problems needed to be seen in the larger context of her family.

Novels come in patches. First a brother arrived, then a sister, then another brother and another (he proved to be too much and I had to let him go). Initially the novel was told in different points of view, with each sibling having a chance to justify his or her choices. But I felt I was writing three (or four) different novels and finally took a chance on telling only Polly’s story.

To me, the phenomenon of Wasp Rot is fascinating: old families with a lineage, perhaps wealthy at one point, that have fallen on harder times, that haven’t been able to adapt, that still have a sense of themselves and their importance in the world, and how hard it can be to break free of that, to really live in the present. Alcoholism does tend to run in these families and is in fact a family disease. And as a structural element, it seemed a good way to get at some of the harmful patterns that move through families.

Q. What writers and novels inspired you while you were writing this novel?

A. Two extremely helpful books were Summer Island: Penobscot Country by the photographer Eliot Porter and Drinking: A Love Story by Caroline Knapp.

Eliot Porter wrote Summer Island in 1966 about growing up spending summers on Great Spruce Head Island, which is close to where I imagined Bride Island to be. Eliot describes daily life on the island, which in the early twentieth century was quite a production, and writes lovingly of its natural beauty and wildlife. The book is illustrated with his own photographs.

Drinking: A Love Story is an extraordinary memoir about being an alcoholic. Caroline Knapp, a journalist who died of lung cancer at the age of forty-two, writes movingly and eloquently about her family and her struggle to understand and to end a twenty-year addiction to alcohol.

Over the years I was working on Bride Island there were books that meant a great deal to me but could not be said to be direct influences: Shirley Hazzard’s The Transit of Venus, Elizabeth Strout’s Amy and Isabelle, Rebecca West’s The Fountain Overflows. I have always loved the novels of Sue Miller and Barbara Pym, the short stories of Alice Munro and William Trevor, the poetry of W. B. Yeats and Elizabeth Bishop. There was something about the cadence of Ruth Stone’s poem “Romance” that I found inspiring the summer I read it over and over. And of course Virginia Woolf and Jane Austen.

A. I’m revising a novel about a scientist and his wife and how they cope with the death of their baby, a topic that falls into the category of “questions I’m afraid of.” And I’ve started a new book about two sisters and their marriages. For me, writing is a slow, unpredictable process, and sometimes I don’t even know what I’m writing about until well into a project. But each novel is its own world with its own psychology and demands. And there are technical challenges too. Where Bride Island was relatively compact in terms of time—it takes place over a year and in twelve chapters, one for every month more or less—in the novel about the sisters, I’m interested in a much longer view. How a close relationship changes over time, and what perceptions are available at what point in one’s life, can drive a novel as much as plot or other narrative devices.

LISTENING TO BILLIE
Back to Top