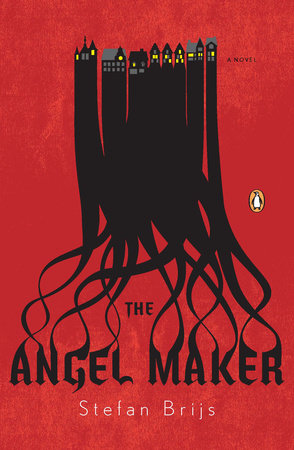 Rumors of all sorts precede Dr. Victor Hoppe’s return to his childhood home in the Belgian hamlet of Wolfheim. But nothing could have prepared the villagers for the three identical infant sons who accompany him. Those who’ve managed to steal a look at the brothers have seen that the boys all boast their father’s carroty red hair—and his disfiguring cleft palate. The doctor does little to ingratiate himself with the townspeople until the chance rescue of a choking toddler and his ability to cure the local priest’s stomach ailment move the villagers to accept him as an upstanding member of the community. It isn’t until Victor hires Charlotte Maenhout, a retired schoolteacher, to care for the motherless boys that the truth about them—and the good doctor—slowly begins to emerge.

The triplets are named after the archangels Michael, Gabriel, and Raphael, though their appearance is far from heavenly. In fact, Charlotte is initially put off by her wizened charges with their deathly pale skin and overly large heads and eyes, but she soon comes to love them. The boys are intellectually precocious and rapidly learn languages, reading, mathematics, and geography, all well before their third birthday.

As the weeks pass, Charlotte notices peculiarities in the Hoppe household: the boys are not allowed to leave the family home; the doctor often subjects them to painful medical “tests”; the boys have been marked with discreet tattoos on the back of their necks—clearly for identification purposes—they look so much alike that not even their father can tell them apart. Attempting to bring some warmth into their otherwise sterile lives, Charlotte throws the trio a birthday party—and when it goes awry she begins to suspect that their father’s cold demeanor masks something much more insidious.

When Victor leaves to attend a conference, Charlotte rifles through his office and discovers that he was trained as a geneticist and once held a prestigious research position at the University of Aachen. There, he made pioneering advances in cloning mice until scandal drove him out. What she does not learn, however, is that his own childhood was as bizarre as the one he has created for his sons.

Declared an imbecile, Victor was sent at birth to a mental institution run by a local convent and only saved from lifelong incarceration by Sister Marthe, a kind novice who senses something unusual about the mute boy, allowing his natural intelligence to blossom under her tutelage. His father brings him back to Wolfheim, but is unable to feel or express love for the boy. As an adult, Victor chooses to study cloning, so that it will be he and not God that “might make the ultimate decision about life” (p. 168). Thus his studies in the pursuit of science are shaped primarily by his antipathy towards God.

The Angel Maker is a gripping page-turner and the first novel to be published in the United States by the international bestselling author Stefan Brijs. A horror story on par with Frankenstein and The Strange Case of Dr. Jekyll and Mr. Hyde, this heartrending and terrifying tale of one man’s mania and scientific hubris will linger in the imagination long after the book is finished.

Stefan Brijs is the author of four novels. He lives in Antwerp, Belgium.

A CONVERSATION WITH STEFAN BRIJS

Q. The Angel Maker offers quite a convincing case against cloning. What is your personal opinion?

I once talked to a scientist who specialized in the ethics of cloning and she told me that we don’t have to ask the question, Will be human clones in the future? One day, there will be. The only thing people (scientists/politicians) will have to decide on is whom we may clone. May we clone a dead child? Mentally or physically disabled people? Gay people? In my novel, I already used some elements of this discussion, not to give any or my opinion, but only to show the possibilities of human cloning (and the dangers). My personal opinion is of no matter in this discussion. I’m only a writer with a lot of imagination.

Q. Frankenstein and The Strange Case of Dr. Jekyll and Mr. Hyde are your novel’s obvious forerunners but what are your other influences? And what kind of research did you do?

It may sound strange but neither novel was an influence. In 1997, after the birth of the sheep Dolly, the first mammal clone, I started thinking about a novel that had human cloning as a theme. I asked myself some questions. Suppose you could clone yourself, what then? Would you in the first place not even copy yourself, but would you make a better specimen of yourself, physically? Suppose you have—like Victor Hoppe—a harelip or you are deaf like Gunther, one of the boys in my novel. Would you change those things? Would you manipulate the genes of your clone so that he wouldn’t have a harelip or wouldn’t be deaf? The second question I thought about was, When you clone yourself, does your clone have to become smarter than you, or more famous than you; does he have to do the things you failed? On the other side, if you want a clone that becomes exactly like you, will you give your clone the same trauma you had in your childhood? For example, if you were molested when you were ten years old, will you molest your own clone when it is at the same age? That was what I was thinking in the beginning and after that I started reading about cloning (the technical parts, the history, things that can go wrong, because, of course, I was looking for some drama). After I read all that I started writing for more than three years without a plan. I followed my imagination and in the end it turned out to be a completely different novel than what I had in mind. Cloning was not the main theme anymore; it became a novel about good and evil, science versus religion, madness against genius, etc.

Q. Despite their appearance, it’s impossible to view the triplets as monsters. Why did you make them so sympathetic?

In this novel everything is black or white, good or evil, because that’s the way Victor Hoppe sees life. So you can easily pick out the bad and the good characters in the book. For almost every bad person there’s a good person. The bad ones are, for example, Father Kaisergruber, Sister Milgitha, and Rex Cremer. The good ones are Frau Maenhout, Sister Marthe, and Brother Rombout. But as you know when you’ve read the book, good and bad are interchangeable—it’s just the point of view from which you look at it. The triplets are not especially bad or good. They are just harmless children and that’s why they are so sympathetic. They are victims and we always have sympathy for them. But perhaps if they had the chance to grow up they might have become as evil as Victor.

As a child he was also kind of sympathetic.

Q. You set The Angel Maker in the very recent past, yet the village of Wolfheim seems mired in the Middle Ages and its inhabitants are ruled by superstition. Is this representative of rural communities in Europe even now?

People who grew up in small villages everywhere around the world and not in a city like Amsterdam or New York know that Wolfheim isn’t medieval. Small towns are still closed communities where prejudices and gossip rules. I think that’s why the translation rights have been sold from the United States to Russia and from Israel to Turkey. For many people this strange village is very recognizable.

Q. Do you think genius and madness are close companions?

No, but I used this idea to create a drama. There are thousands of examples to the contrary but one mad genius is enough to think that all the other geniuses are similar. That’s the way “normal” people think.

Q. Besides Victor—or perhaps including Victor—who do you see as the novel’s primary villain?

Victor is not the primary villain at all. In my opinion he’s more a victim than a criminal. In his (sick) mind—ill-formed by his disease and by his childhood—he only wants to do good for mankind. He doesn’t know better. In that way there are worse criminals in my book. I think especially about Father Kaisergruber and Rex Cremer. Both of them are driven by an extreme ambition and when things go wrong they pretend they have nothing to do with it.

Q. Is there one aspect of the novel you’d like to explicate for an American audience?

I think that isn’t necessary. My book is so full of themes, characters, storylines, details, and emotions that every reader can find something in it. Nationality has nothing to do with it, only personality.

A novel called Post for Mrs. Bromley, a moving tale about maternal and brotherly love during World War I (but also about loss, longing, and consolation).

Learn More About The Angel Maker
print
Back to Top