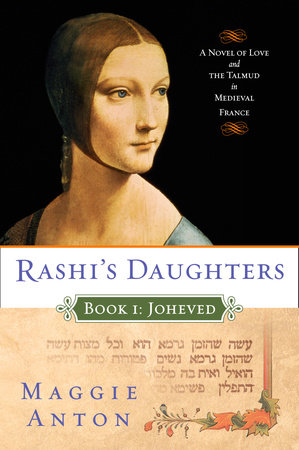 INTRODUCTION
The first novel in a dramatic historical trilogy set in eleventh-century France, when—for a Jewish woman—knowledge was dangerous.

In 1068, the scholar Salomon ben Isaac returns home to Troyes, France, to take over the family winemaking business and embark on a path that will indelibly influence the Jewish world—writing the first Talmud commentary, and secretly teaching Talmud to his daughters.

Joheved, the eldest of his three girls, finds her mind and spirit awakened by religious study, but knowing the risk, she must keep her passion for learning and prayer hidden. When she becomes betrothed to Meir ben Samuel, she is forced to choose between marital happiness and being true to her love of the Talmud.

In Book I: Joheved, Maggie Anton introduces readers to the remarkable daughters of Rashi and brings eleventh-century France—the people, customs, and attitudes of society—vividly to life.

Q. Who was Rashi?

A. Born in 1040 in northern France, Rabbi Shlomo Yizhaki (better known by his Hebrew initials, Rashi) was a great Talmudic scholar who studied in Worms and Mayence before starting his own school in his native city of Troyes. Because of his unique take on Talmudic study, students flocked to receive the benefits of his vast erudition and distinctive method of interpretation.

A. Rashi wanted to make being Jewish as easy as possible. His belief in finding the most lenient legal opinion without building “fences around the Torah,” and in permitting rather than forbidding, makes him a model rabbi for our times.

Q. How did you get interested in Rashi’s daughters?

A. I began studying Talmud with a group of women after my children grew up and left the house. The more I studied Talmud from a feminist perspective, the more curious I became about Rashi’s learned daughters and how they managed to study Talmud in the Middle Ages when such study was supposedly forbidden.

Q. Why was Talmud study forbidden for women?

A. This question deserves more than the brief answer I’ll give here. In Deuteronomy, Jews are commanded to teach Torah tobnaichem, a word that even the Orthodox translate as “your children.” But the early rabbis used its literal meaning, “your sons,” and decided that only men were obligated to study Torah. The Talmudic sage Rav Eliezer took this exemption of women one step further and declared that “he who teaches his daughter Torah, teaches her lechery.”

Q. So what were the consequences for women who studied Talmud?

A. All societies, Jews included, disapprove of those who don’t follow their norms. Women who wanted to study Talmud were seen as lacking in proper feminine attributes, and because women were thought to be light-headed, incapable of serious study, those who tried to study Talmud would only learn to be crafty and devious. Then, as now, since a man typically preferred to believe that he was more intelligent than his wife, the learned woman was left with a limited choice of potential husbands.

Q. What were the most interesting things you learned from your research?

Q. Were there any surprises?

A. I was quite surprised to learn that there was little anti-Semitism in Rashi’s time—the church was more interested in converting pagans and going after its own heretic sects than in persecuting the Jews. Ghettos and blood libels came centuries later. Also, Jews lived prosperous lives (even the poorest Jews had servants) and engaged in many occupations (Rashi was a vintner, for example). Some Jews were feudal lords with small fiefs and very few Jews supported themselves by money-lending.

Q. What do you see as the legacy Rashi’s daughters leave for modern Jewish women?

A. Rashi’s daughters recognized the value of Torah study in the Jewish world, and they wanted an education for themselves as well as for their husbands and sons. Like women today, they attended synagogue regularly and performed those rituals usually reserved for men. When modern Jewish women create new rituals and new blessings, we are following in the footsteps of Rashi’s daughters and doing what our female ancestors were already doing 900 years ago.

Q. Why did you choose to include explicit sex scenes in the book?

A. I don’t like historical fiction that closes the door on its characters, so I resolved to follow Joheved no matter what she was doing: eating, praying, using the privy, studying, dealing with menstruation, preparing a corpse for burial, and making love. Joheved is a young woman, newly married and hoping to get pregnant, so naturally sex is an important part of her life. I wrote the book I wanted to read, which is why the Talmud scenes are in there as well (and there’s a lot more Talmud than sex). But most important—so many books, movies, and TV shows today are saturated with casual hook-up sex that you’d never know how good sex could/should be between a loving couple in a sacred relationship, which is what Judaism teaches. Many parents have told me that Joheved’s wedding night is the kind of sex scene they want their teenagers to read.

The Books of Jacob
Olga Tokarczuk

The Heartsong of Charging Elk
James Welch
Back to Top