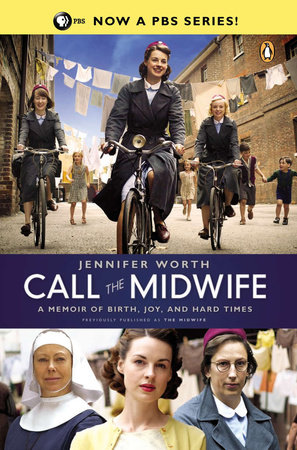 INTRODUCTION
“Whoever heard of a midwife as a literary heroine? Yet midwifery is in itself the very stuff of drama and melodrama” (p. xi).

In the early 1950s, Jennifer Worth became a nurse. After her general training, she found herself in the convent of the Midwives of St. Raymund Nonnatus, an order of Anglican nuns devoted to delivering babies in the slums of the London Docklands. An agnostic, she little expected that she would eventually spend two and a half years with the sisters that would transform her life forever.

Although a mere fifty years distant, the world of Call the Midwife is profoundly different from our own. The Pill was yet to be introduced, and the average nuclear family was several times larger than it is today. Parents with a dozen or more children regularly shared two or three rooms, counting themselves lucky to have an indoor cold–water tap with which to manage the cooking, cleaning, and endless piles of laundry. Equally astonishing is Worth’s recollection that she and her colleagues—unlike the area’s policemen—could safely traverse the East End’s unlit roads at night, alone. “So deep is the respect, even reverence, of the roughest, toughest docker for the district midwives that we can go anywhere alone, day or night, without fear” (p. 10).

It is within this milieu that young Worth encounters the vastness of the human drama and a cast of characters worthy of Dickens. Her antenatal rounds bring her into intimate contact with the women of London’s working class—from Brenda, physically bowed by Rickets but possessed of indomitable good spirits, to Molly, a teenage bride whose brutal husband forces her into prostitution and imperils the lives of their three children, to Conchita, a native Spaniard who does not speak the same language as her doting husband but is about to deliver their twenty–fourth child. Worth relates their stories and more with compassion and affection in equal measure.

Working side–by–side among the sisters, Worth soon learns that they, too, possess compelling histories. Sister Monica Joan is a mischievous and slightly dotty octogenarian when Worth meets her at Nonnatus House but in her youth, the sister defied her aristocratic family to become a nun and midwife, eventually delivering thousands of babies in London through the worst bombings of the Blitz. However, it is Sister Evangelina who most surprises Worth. After accompanying the abrupt and seemingly humorless nun on her rounds, Worth discovers that the sister is a war heroine who is beloved by her patients for her scatological tales and ability to emit a fart of Chaucerian proportions. Wise and saintly Sister Julienne is the stability of the convent, and clever Sister Bernadette is the perfect midwife.

Written in response to an article in The Midwives Journal lamenting the notable absence of midwives in literature, Call the Midwife offers a riveting look behind the scenes at one of the world’s earliest and most little–known professions. Worth’s memoir of her early years at Nonnatus House is alternately heartwarming and heart–wrenching and the stories she shares will fascinate anyone who enjoys a good yarn—but especially anyone who has ever had or plans to have a child.

Jennifer Worth is a former midwife as well as a writer and musician. She lives in London.

A CONVERSATION WITH JENNIFER WORTH

Q. Why do you think midwifery is cloaked in mystery?

Mystery and magic have always surrounded childbirth, mostly due to ignorance. Likewise midwives have been reviled and ridiculed, even feared as witches. Sex, birth, and death are still taboo subjects in varying degrees in different cultures.

Q. Why do you think this is?

Fear, perhaps. Fear of the power these things have over human life. Knowing that we don’t control everything, maybe. I’m not quite sure. Perhaps an anthropologist could tell you, or a philosopher.

Q. Were you ever reviled or ridiculed?

Oh, no, we were valued and respected. But it was not until the beginning of the last century that midwifery as a profession came to be taken seriously. That’s only a hundred years ago, in thousands of years of human history.

Q. What are the characteristics of a successful midwife?

Well, in my day it was said that it took seven years to make a good midwife, so obviously experience counts a good deal. I think the innate ability to inspire confidence in a woman in travail must be high on the list. Training, knowledge, judgment, patience all come into it, and the capacity for hard work.

Q. That sounds like a formidable list. What was the attrition rate among young midwives you have worked with?

Almost nil, I would say.

Q. You mean no one dropped out? No one found they couldn’t take it?

No, not in my experience, and that was because the work was so fulfilling. Job satisfaction is the term we would use today. It is a lovely profession. A midwife is in the thick of life. She is the key figure in the most intense and intimate time of a woman’s life.

Q. Can you relate your favorite experiences as a midwife?

Q. Is that why you wrote the book?

Yes. And also because, aside from textbooks, there is no book in all American or European literature written by a midwife about midwifery. Given the enormity of the subject, that’s extraordinary!

Q. What changes have you seen since you started midwifery fifty years ago?

Well, half a century is a long time and everything has changed. I would say there is more anxiety attending childbirth these days; more caesarian sections, more inductions, more drugs, more drips, more medicine in other words. Childbirth has drifted away from being a natural event into a medical condition requiring medical treatment.

Q. The tide seems to be turning back towards a more natural approach, and many women are choosing a midwife. Do you think this is good?

Yes, but perhaps not for everyone.

Q. What advice would you give to a woman planning her delivery?

Stick to what you think is right for you. If you think a home birth attended by a midwife is best for you, don’t be deflected. But if you would feel safer in a hospital environment, that’s all right too.

Q. What advice would you give to a woman training to be a midwife today?

Always remember you are part of the most wonderful, the most important, and the most privileged calling in the world. Nursing and midwifery are a vocation, not just a job.

Q. You went to Nonnatus House an agnostic, but you found God. Did you contemplate becoming a nun?

That is a very deep question, and I do not readily wear my heart or my faith on my sleeve. Call the Midwife

is the first of a trilogy and the three books together depict a spiritual journey. My life was transformed forever by the sisters. They are still a religious order, and I have ongoing contact and communion with them and lean heavily on them for prayer and guidance.

The Boys in the Boat
Back to Top